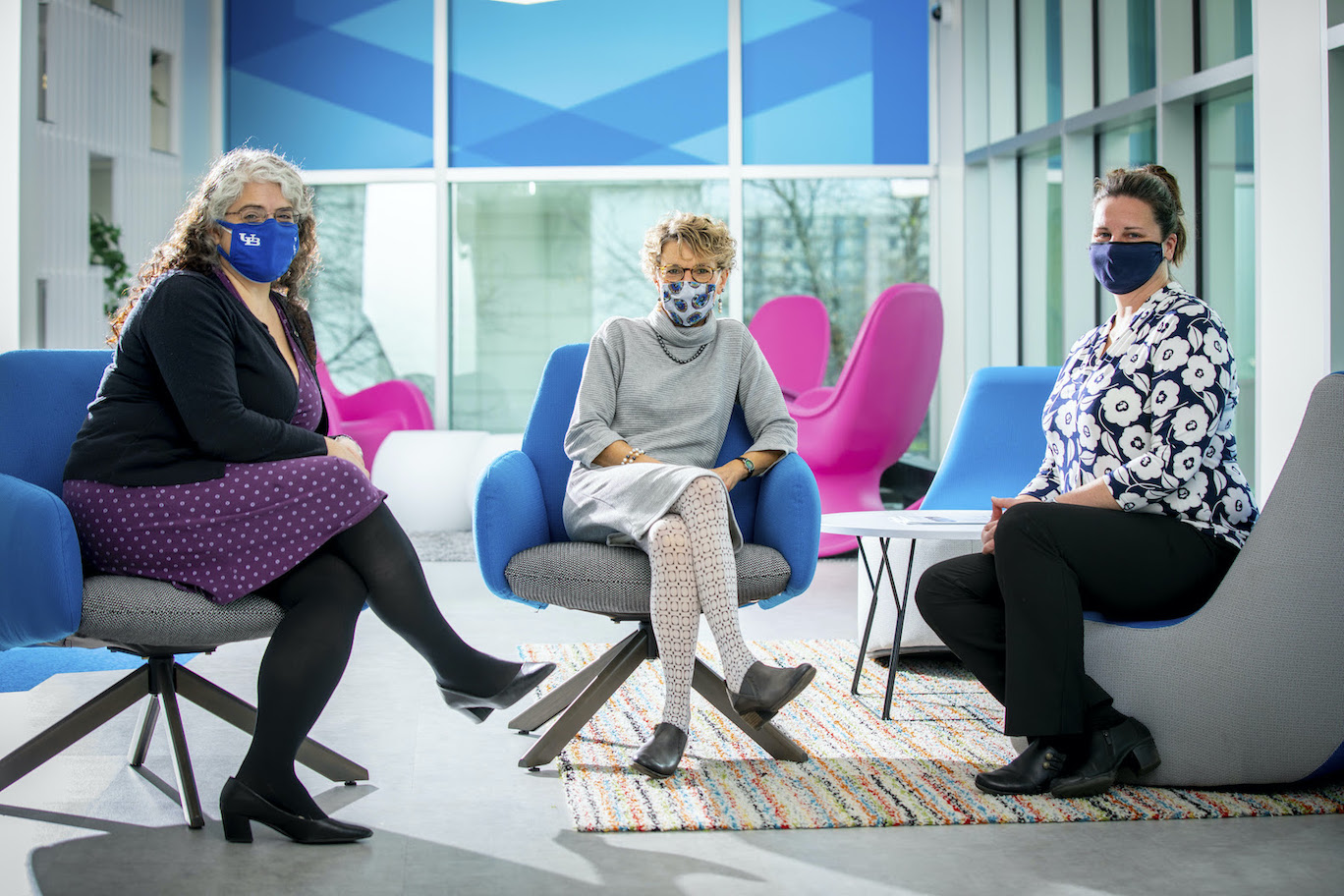 Community collaboration: Key players in the effort to do genomic surveillance of COVID-19 in Erie County are, from left, Jennifer Surtees, associate professor of biochemistry in the Jacobs School; Gale Burstein, Erie County Commissioner of Health; and Carleen Pope, administrative coordinator of the Erie County Public Health Laboratory. (Photo by Douglas Levere)

During the current surge of COVID-19 cases in Western New York, a dedicated team of University at Buffalo scientists has been busy sequencing and analyzing as many as 1,000 viral samples every week.

“We’ve been keeping an eye out for delta, which was accounting for 99% of what we’ve been seeing, and of course the omicron variant,” says Jennifer Surtees, Ph.D., associate professor of biochemistry in the Jacobs School of Medicine and Biomedical Sciences at UB. “We’re really interested to see how the omicron variant relates to delta. Can they coexist or will one dominate the other?”

The answers to those questions have real-world implications, which reverberate throughout Western New York’s health care system and beyond. But the ability to provide those answers to the local community based on information gleaned from patients’ virus samples was anything but guaranteed when the pandemic first hit.

It was March 2020, the early days of the pandemic, and the world was in lockdown. Without access to her lab where she studies genomic stability and mutations, Surtees was seeking any information about the new SARS-CoV-2 virus.

“Things were happening so quickly, it wasn’t like you could read the scientific papers,” she recalls.

Surtees started following virologists and people in the sequencing community on Twitter. To someone who studies mutagenesis for a living, the conversation among the scientists was riveting. Some of the tweets she was reading gave her pause.

“Early on, some of the experts were saying it looked like the virus was mutating slowly and predicted that we wouldn’t see many mutations in the virus,” she recalls, “but I was skeptical. We really didn’t know enough about the virus to say that.”

As is the rule with viruses, she notes, “As more people are infected, the virus copies its genomes and sometimes makes mistakes. The more infections there are, the more mistakes, or mutations.”

Surtees’ suspicions about the virus were, of course, borne out as the world learned of new variants, some of which are more contagious and also responsible for more severe disease.

“People were doing genomic surveillance in different parts of the world,” Surtees says. “I saw how powerful that could be for making decisions based on what’s happening in the local community. I thought, ‘Ok, we need to be doing this here.’ ”

Surtees contacted UB’s office of the vice president for research and economic development to ask if anyone at UB was doing genome sequencing of the SARS-CoV-2 virus isolated from Western New York patients. No one was.

Teresa Quattrin, M.D., senior associate dean for research integration in the Jacobs School and Special Populations Core director in the Clinical and Translational Science Institute, put Surtees in touch with Gale Burstein, M.D., Erie County commissioner of health, and a faculty member in the department of pediatrics in the Jacobs School.

“Gale was enthusiastic from the get-go,” Surtees says. “She seemed to recognize the importance and potential value of sequencing. She agreed to start sharing deidentified samples straight away.”

It didn’t hurt that Burstein has a research background and is a Jacobs School alumnus. Burstein put Surtees in touch with Carleen Pope, administrative coordinator of the Erie County Public Health Laboratory.

From her view in the health department and at the center of Erie County’s pandemic response, Burstein saw rapidly growing numbers of COVID-19-related disease, hospitalizations and deaths.

“The urgency of learning as much as possible about SARS-CoV-2 elevated genomic sequencing to a high priority project for Erie County,” Burstein recalls.

The three-way collaboration laid the foundation for what would eventually turn genomic sequencing of the virus in Erie County from a UB biochemist’s idea into a reality that helps hospitals and policymakers make critical health care decisions.

But getting samples was only part of the story. Doing the sequencing required sophisticated scientific equipment, as well as personnel with the genomics and bioinformatics expertise who could set up a dedicated infrastructure that could make sense of all the data that would be produced.

Luckily, all of that was available a block away in the genomic and sequencing core at UB’s New York State Center of Excellence in Bioinformatics and Life Sciences (CBLS).

Surtees says simply: “I would not have been able to do this without the sequencing core or the people who run it.”

That connection was already strong: Surtees co-directs UB’s Community of Excellence in Genome, Environment and Microbiome (GEM) with Norma J. Nowak, Ph.D., executive director of the CBLS and director of the Genomics and Bioinformatics Core. And for years, Surtees had been working with the core on her research into what makes a genome stable.

As the pandemic unfolded, Natalie Lamb, a Jacobs School doctoral candidate doing dissertation work in Surtees’ lab, had been working on mutation profiling – a skill directly transferable to COVID-19 sequencing. After defending her Ph.D. thesis, CBLS hired Lamb as a bioinformatics analyst. Lamb, together with Brandon Marzullo, senior programmer and bioinformatics analyst, working under Jonathan Bard, a senior bioinformatician, comprise the CBLS team that makes sense of the data the sequencing produces.

In late spring 2020, a series of Zoom meetings proceeded between Surtees, Nowak and Donald Yergeau, Ph.D., associate director of genomic technologies at CBLS, with personnel at the Wadsworth Center, the state Department of Health’s research lab in Albany.

“We wanted to get a sense of what they were doing so we would be aligned,” Surtees says. “We did a lot of troubleshooting and optimization of protocols.”

By late spring, Yergeau had established the wet lab pipeline in the CBLS to convert to DNA the viral (SARS-CoV-2) RNA genomes derived from patients through reverse-transcription. The process involves amplifying the DNA version of the entire genome for each sample in small fragments and subjecting them to next-generation sequencing.

Bard established a bioinformatics pipeline to compare the sequenced Erie County genomes with the reference genome, which early on was the original virus that circulated in Wuhan, to identify any changes or mutations. The original SARS-CoV-2 virus “is likely extinct by now,” Surtees says, adding that it’s been replaced by the many variant versions into which it has mutated.

Surtees obtained the first positive SARS-CoV-2 samples from Erie County in April 2020. By May, she had received Institutional Review Board approval to study the first batch of deidentified (anonymous) samples isolated from Western New York patients with COVID-19. By July, the infrastructure was up and running, capable of reliably detecting and identifying mutations.

Last summer, the core was one of five labs chosen statewide as part of a $20 million sequencing partnership between the Wadsworth Center and external laboratories. The effort aims to greatly expand genetic sequencing on SARS-CoV-2 positive specimens derived from the state’s population outside of New York City.

Since then, the team Surtees launched has sequenced more than 4,000 virus samples from Erie County residents. They receive samples on a regular basis from the Erie County Department of Health, Kaleida Health, Catholic Health, Erie County Medical Center and KSL Diagnostics, a UB partner company located in Amherst. In addition, the UB team has recently begun receiving samples from WNY Rapid Testing, the Cattaraugus County Department of Health, and the University of Pittsburgh Medical Center hospital in Chautauqua County.

“UB’s sequencing efforts are an important part of our local and regional disease surveillance,” Burstein says.

“This COVID-19 genomic surveillance effort clearly demonstrates how Western New York benefits from UB’s academic health center,” said Allison Brashear, M.D., vice president for health sciences at UB and dean of the Jacobs School. “By leveraging the in-house expertise of our researchers and through strong collaborations with our clinical and government partners, UB is performing an essential service that is helping to safeguard public health in our community.”

This successful effort has its roots in decisions that predate the pandemic by many years.

Rooted in the Human Genome Project

Nowak, whose research contributed directly to the Human Genome Project, notes that it was that project that gave rise to the disciplines of bioinformatics.

“The Human Genome Project required the development of this field,” Nowak says. “We had witnessed that genomics was going to be a driving force in life science, both at the basic level and for improving patients’ health. We weren’t there yet, but it was clear that it was coming.”

The pandemic has more than proven that point.

“Without the sequencing core and without the bioinformatics piece, we wouldn’t be able to make sense of what’s happening, to see where there are different versions of the virus, which are the mutations,” Surtees says.

Nowak and the late Bruce Holm, then senior vice provost at UB, made sure that a genomic and sequencing core would be part of the new center UB was building downtown on the then-fledgling Buffalo Niagara Medical Campus. She notes: “All of us knew then that sequencing would be delivering important discoveries, from the sequencing of pathogens to understanding their short- and long-term impact on human health. We have witnessed sequencing technology become a critical component of public health around the world.”

Since the start of the pandemic, genomic surveillance efforts in the U.S. have greatly improved. However, smaller cities often do not have the capacity to do the sequencing and bioinformatics necessary to know how COVID-19 is affecting their local communities.

Nowak points to the successful and productive relationships both within Western New York and statewide that have resulted from the sequencing effort during the pandemic. UB scientists, including Surtees, Nowak and others, have also received awards from the SUNY Research Foundation and other funders to pursue this and related work on COVID-19.

“UB did this great thing years ago,” Surtees says. “It speaks to the need to be forward thinking in how we think about UB. It’s not always possible to predict how a certain technology will be useful, but it will be useful.”