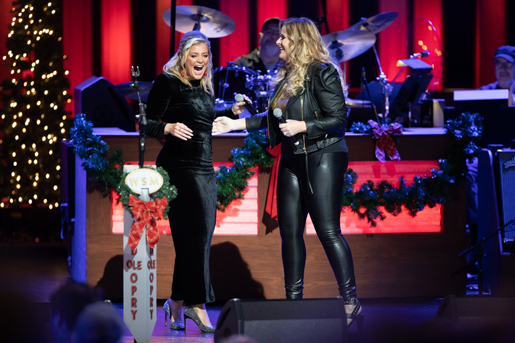 Lauren Alaina ended a successful 2021 with an invitation on Saturday night, delivered by Trisha Yearwood, to become a member of the Grand Ole Opry. (©Grand Ole Opry, photos by Chris Hollo/courtesy of Schmidt Relations)

Multi-Platinum-selling No. 1 singer/songwriter Lauren Alaina was invited to become a member of the Grand Ole Opry over the weekend. The Opry was the first major stage Alaina played just a week after she was named runner-up on season 10 of “American Idol,” making her Opry debut on June 10, 2011. Earlier this fall, she marked her 50th appearance on the Opry.

Opry member and friend/mentor Trisha Yearwood surprised Alaina on stage with the invitation. Throughout the evening, the Opry played video greetings from artists sharing their 2021 Christmas wishes. When Yearwood appeared to share her wish via video on the Opry House screens during a break in Alaina’s set, she ended with, “Hey … is that Lauren Alaina?” Yearwood then made her way on stage. “Junior (her nickname for Alaina), I have a present for you. And I have some surprises for you, too. I know your mom is here and I know your dad is, as well. He’s super-proud of you right now because I have the honor of asking you on behalf of the Grand Ole Opry if you will please accept our invitation of becoming our newest member.”

An emotionally overcome Alaina dropped to her knees and finally uttered a winded, “Yes!” Holding Yearwood’s hand after many minutes catching her breath, she said, “I did not expect this. You are my hero. I could not have picked a more perfect person to ask me. She calls me Junior – ya’ll, I’m in her phone as Junior, which is the coolest thing to have happened to me besides this!”

“You are the real deal,” Yearwood went on to say. “You’ve played over 50 times. It’s obvious what this means to you. This is a very special club to be in, so you have to understand what the Opry means to be asked. It’s such an honor. Country music is in good hands with you. Soak up every second!”

Yearwood duets with Alaina on her Gold-certified song “Getting Good” from her recent album “Sitting Pretty On Top of the World,” and also wrote the foreword to Alaina’s just-released inspirational book “Getting Good At Being You.” 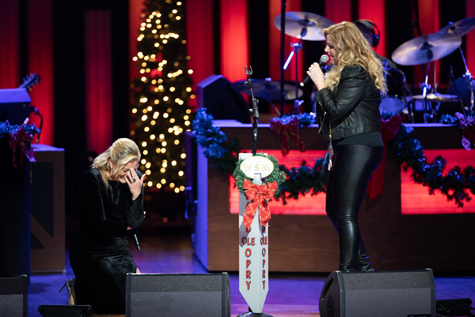 Lauren Alaina ended a successful 2021 with an invitation on Saturday night, delivered by Trisha Yearwood, to become a member of the Grand Ole Opry. (©Grand Ole Opry, photos by Chris Hollo/courtesy of Schmidt Relations)

Alaina will be formally inducted into the Opry family on an early 2022 date to be announced soon.

“Lauren has been visiting us for 10 years, yet she still brings youthful exuberance and excitement with her every single time she plays the Opry,” said Dan Rogers, Opry vice president and executive producer. “We are thrilled that her name will be added to the Opry member roster next year.”

Multi-Platinum-selling singer/songwriter Alaina has earned three No. 1 hit singles in just under three years with her smash “Road Less Traveled” (2017), the now six-times-Platinum “What Ifs” (2018) with her childhood friend and superstar Kane Brown (his first career No. 1), and “One Beer” (2020) with friend and rising star HARDY (also his first career No. 1). Her No. 1 debuting album, “Sitting Pretty On Top of The World,” which includes her current single “Getting Over Him” featuring Jon Pardi, as well as her recently RIAA-certified Gold-selling “Getting Good.” Alaina recently released her inspirational book “Getting Good At Being You.”

“Sitting Pretty on Top of the World” follows on the heels of the Georgia native’s two EPs, “Getting Over Him” and the previous “Getting Good.” “Road Less Traveled” was the most-streamed album of the year for a female artist in 2017 and landed on multiple “Best Of” lists, including Billboard, Rolling Stone and Amazon. The album included her first No. 1 smash, “Road Less Traveled,” as well “Doin’ Fine” and the inspiring “Three.”

Alaina has shared the stage with superstars including Alan Jackson, Blake Shelton, Carrie Underwood, Luke Bryan, Martina McBride and Jason Aldean, sold out her own, first-ever headlining, “That Girl Was Me Tour,” and has performed on some of the highest-profile stages in the world.

Opry presents the best in country music live every week from Nashville. The Opry can be heard at opry.com and wsmonline.com, “SiriusXM: Willie’s Roadhouse,” and its flagship home, 650 AM-WSM, with Saturday night shows seen on the Circle Network. The Grand Ole Opry is owned by Ryman Hospitality Properties. For more information, visit opry.com.