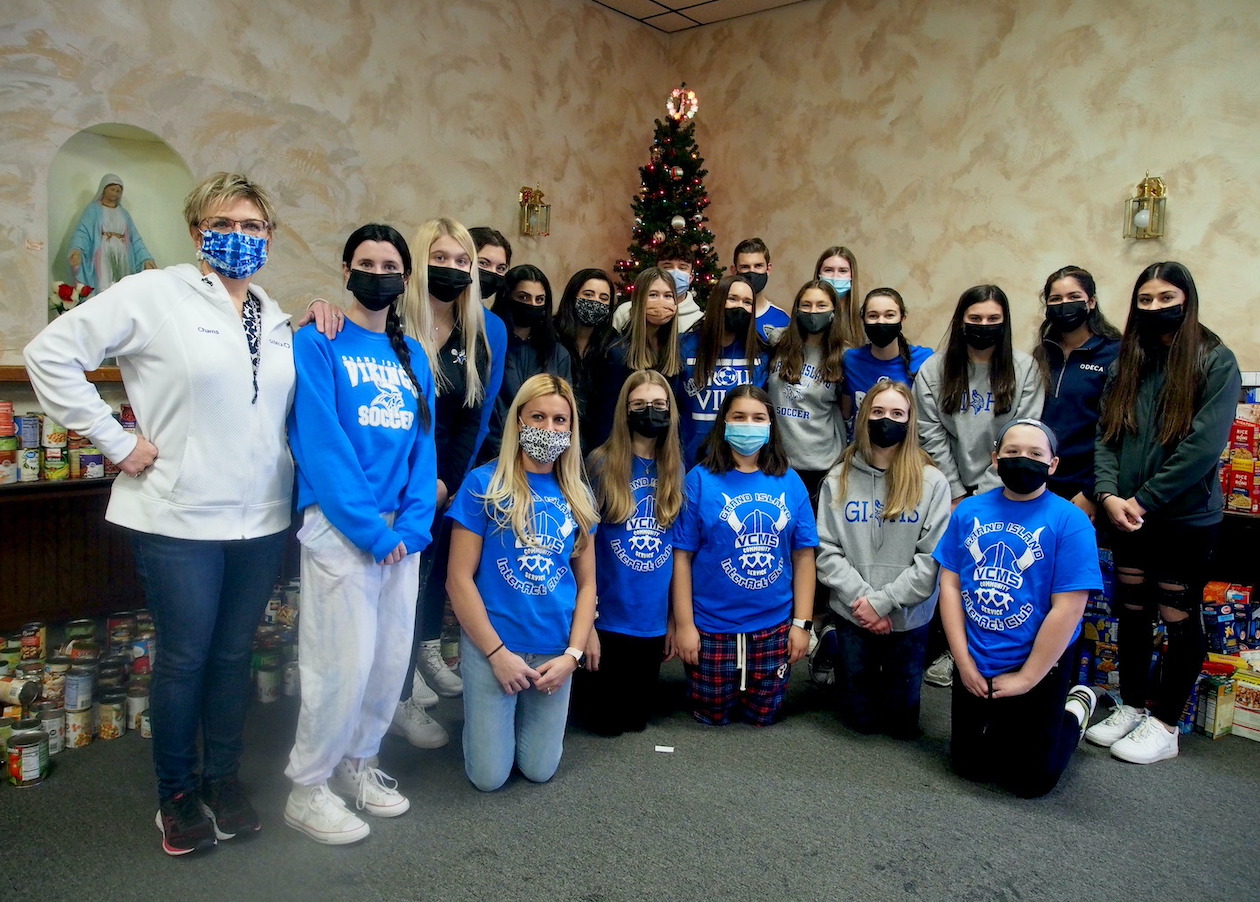 Donors of all ages contribute to the Neighbors Foundation

Islanders, from kindergarteners to senior citizens, have been getting together for weeks to collect nonperishable food and other items, such as handmade hats and mittens, to donate to the Grand Island Neighbors Foundation, to be distributed to community members in need during the holiday season.

David Conboy, president of the Neighbors Foundation, said, “In today’s event, we have assistance from the Grand Island High School and all of the schools on the Island. They collected food over the last few weeks, and they brought it over here, to the Knights of Columbus, and they’re helping us organize the food and package it so we can help 50 to 60 families on Grand Island have an extra-special holiday season. This is something that we’ve done for many years.”

Megan Lavis of DECA, a business-oriented club at Grand Island High School, said, “Each day in school, we’d go around to all of the different classrooms and collect all of the different canned goods to bring them here. Even with our elementary schools, we took part in spreading the word in those schools as well.”

Sophia Terlecki, president of high school’s Interact Club, said she was “pretty surprised” at the response to the food drive, “especially with COVID.”

“There was a small incentive of a little class party. People really went above and beyond, just to donate whatever they could,” Terlecki said. “They kind of forgot about the party incentive. They were just doing it out of the goodness of their hearts. We had people who went door to door to get some cans, ask some neighbors. Everyone really stepped up and showed up.”

Payton Kahdra, president of the high school’s student council, said, “I love being here. I love having all of these people around me, just doing this for the community. I know of a parent who donated a whole pallet of food. It’s just amazing. I think that it’s awesome.”

While the students were in the Knights of Columbus hall, organizing food for donation, four members of the Lions Club came, carrying turkeys to donate to the Neighbors Foundation.

Dave Chervinsky of the Lions Club said, “The Grand Island Lions ran a fundraiser for the Grand Island Neighbors Foundation by offering free bowling for anyone who brought in a frozen turkey or a comparable gift to Mallwitz Lanes on Nov. 17. The Grand Island Community came out and donated 200 pounds of food, including 17 turkeys, and $100 in donations.”

At the Grand Island Golden Age Center at the Nike Base, members had spent the month of November filling a barrel with food donations for the Neighbors Foundation. Those donations were collected on Dec. 13.

“They also donated homemade hats, headbands, mittens and scarves, as well as socks, to the Neighbors Foundation,” said Jen Menter, recreation supervisor at the Golden Age Center. “They also donated many other hats, mittens, scarves and headbands to other organizations throughout our Western New York area, totaling over 1,194 pieces, that they made during the 2020-2021 year. So, we just bagged all of those items and donated them to over 20 different organizations in our area and dispersed them out this season, to help keep those in need warm over the coming winter months. We were very happy to be able to make those items over the course of the year with yarn that’s been donated by many people. People would come in during programs or during lunch and would bring in a boxed item or a canned item to help those in our Grand Island community.”