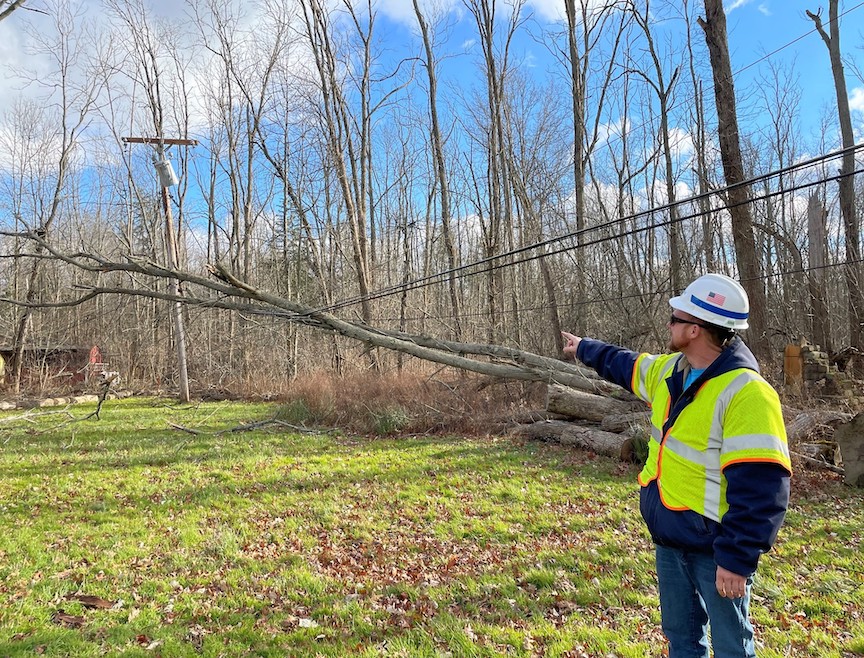 Early in the afternoon on Dec. 11, the winds howled, with gusts up to 75 miles per hour. Stephen Stouter, who lives on Westwood Drive, looked outside and saw fire in his neighbor’s backyard.

“The neighbor on one side had a tree come down on their power lines, and they had electricity arcing and sparking and some flames showing in their backyard,” he said. “I looked at my other neighbors, and there was a tree down on their power lines. As I was watching, another tree came down on his wires. So, there were trees coming down. And across the street from us, there were multiple trees coming down. The emerald ash borer has devastated all of the ash trees. So, a lot of the ash trees are dead and still standing, and they came down with a vengeance in the wind.”

At the same time, he saw the electricity to his own house had gone out. It was restored on Monday afternoon.

Stouter said he had an emergency plan in place for such an event: “I work with the Scouts a lot, and the motto of the Scouts is be prepared. We always like to have flashlights and batteries ready. I like to keep a couple of battery-operated lanterns. Whenever a storm is coming, we like to make sure that our cell phones are all charged up because, at least, that will give us internet access and phone capability, even if the power and cable lines are down. In general, we always have a home emergency kit. We always believe in emergency preparedness. So, that has things like extra batteries and a radio and things like that.

“Other than that, I do have a generator that I was able to get set up to power the essential systems of the house. Things like sump pump, fridge, freezer and our furnace. So, we were able to keep the house heated. Probably one of the bigger challenges is for working from home without power and cable or internet. That can be a bit of a challenge. I was feeling bad for all of the work-from-home people and for the college students who have finals week right now. They were probably hit pretty hard by a lack of power and internet.”

On Westwood Drive, power outages occur frequently with storms, Stouter said. “There are a lot of ash trees in the woods. The power lines on our street run through the backyards. So, there are a lot of trees surrounding the power lines as they go through the woods in the backyards, so whenever the winds pick up, we’re often hit by power outages, due to the trees falling on wires.”

During the storm, approximately 20 calls related to the storm were logged by the Grand Island Fire Co. These included calls about outside fires, structural damage, and electrical hazards.

According to Town Highway Superintendent Dick Crawford, the town worked to be proactive in dealing with the storm.

“We brought two crews in at about 3 o’clock (on Saturday) to be ahead of the game,” he said. “We went out and started checking the roads, working with reports from the fire company, the sheriffs, the town police, and residents on identifying and moving trees out of the road for safe passage. It became very clear at about 4:30, 5 o’clock that we needed two more crews to come in, so we mobilized two more sets of two people. So, we had eight people total working the four quadrants that we set up for Grand Island, not including myself and Skip Mrkall, who were also out in vehicles assisting, along with Town Supervisor John Whitney.”

Stouter said. “The Town of Grand Island Highway Department did a great job. Trees were coming down across roads. On Westwood, we had a tree covering half of the road during the storm. There were trees coming down all over the Island.”

Crawford said conditions were “very dangerous out there, both for the volunteer firefighters and for the police and for our crews, in the way that the wind was howling and gusting. We watched trees come down right before us as things were being cleared. So, you had to be very careful and watch what was going on, especially because darkness came very quickly. Fortunately, we had no issues. We were able to maintain all roads to stay open.”

He added, “I think that, due to the fact that we’ve got a lot of dead ash trees, that added to the issue. We were fortunate that a heavy rainstorm was also not a part of this event. Otherwise, we would have seen a lot of additional flooding and issues with trees. There were quite a few trees that blew over that rested on homes. A couple cars got landed on. Fortunately, there was no heavy damage due to fire because of wires arcing. National Grid had a presence here, and things got dealt with fairly quickly. Today, it’s just a matter of cleaning up. The winds have been blowing today, not like they were, so I am sure that there’s going to be some additional residual branches that will be coming down.” 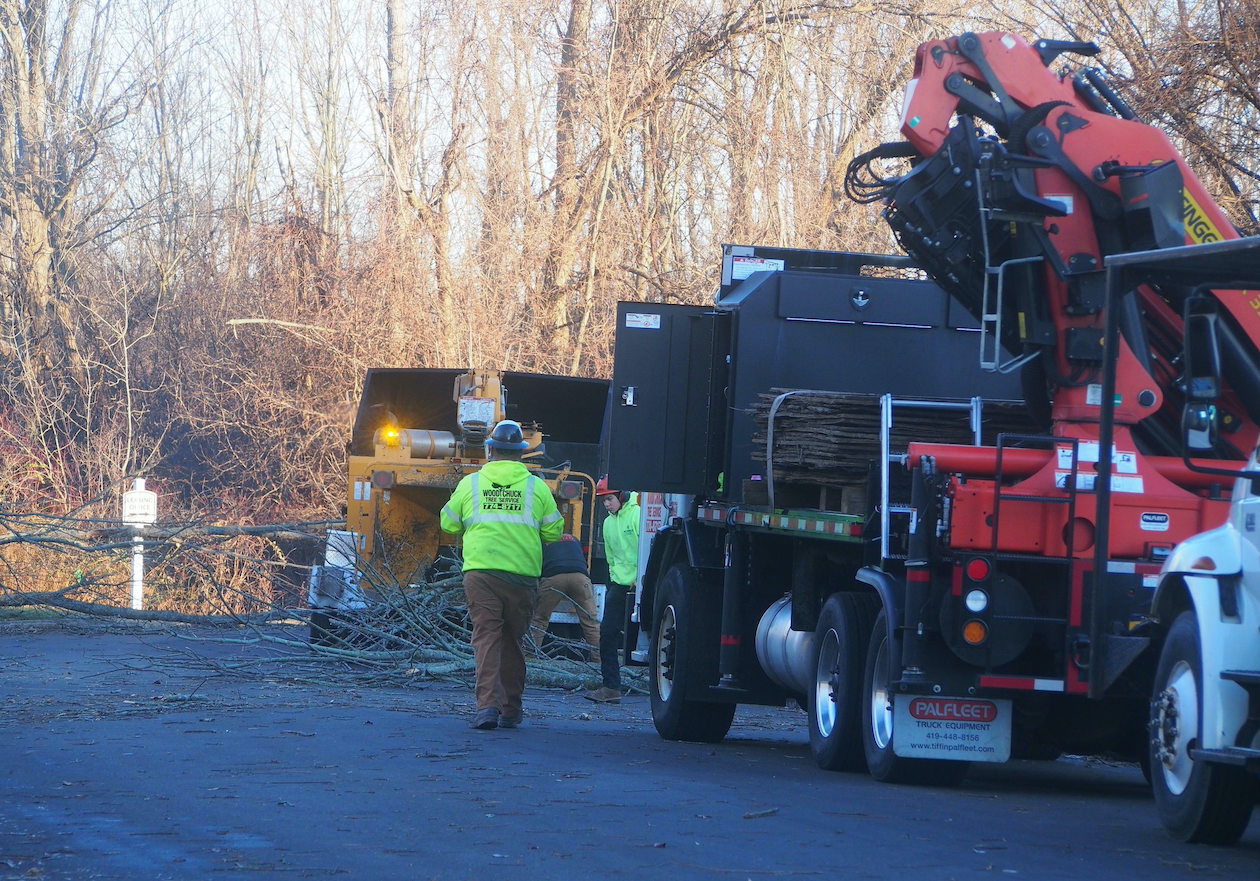 According to a Dec. 11 press release sent by David Bertola, spokesperson for National Grid, “National Grid has increased staffing, extended evening and overnight work shifts and is closely monitoring weather forecasts that include wind gusts of up to 70 mph and heavy rainfall across portions of upstate New York today into Sunday. Areas along the shores of Lake Erie and Lake Ontario are expected to experience the strongest wind gusts. More than 2,500 line, service, tree, damage assessment and public safety workers are ready to respond to damage that may occur.”

Bertola also wrote, in the press release, that the company was distributing bottled water and dry ice in various locations, including the location closest to Grand Island, Niagara Falls Fire Station 8 at 320 Hyde Park Blvd., in Niagara Falls.

By Monday, power was restored to 97% of all areas affected by the “severe windstorm that caused significant and widespread damage across the region over the weekend,” Bertola said.

The cleanup process continues, according to Crawford.

“It’s going to take us a good week to continue to go through the Island with the chippers and the tree cutting, cutting up the wood, to get rid of all of that debris,” he said.

Crawford explained how residents should respond to damage that they discover in the community. “First and foremost, if (residents) see trees that are in power lines, they should stay completely away from them. They should call National Grid to get a ticket started for that to happen. They should also be very careful if they are removing trees and debris themselves that have fallen. Trees are very dangerous animals. You have to be very cautious and know what you’re doing when you’re cutting trees down, especially trees that are leaning. Call the experts. Have them come to your property and assist you. And just to let the residents know that we will be out for the next week or more as we continue to clean up the Island after the storm.”

Stouter said, “The National Grid guys and the Highway Department guys did a phenomenal job. That storm was a widespread event. They restored power all across the state. With all of the trees that were down, being able to work with the tree companies and get power restored as quickly as they did, I think was pretty amazing.

“I would caution that, if people have wires down in the yard, they should be really careful. They should assume that any wires on the ground are live and deadly. They should keep away and, if there’s an immediate life-threatening situation, they should call 911, and they should certainly report the power outage to National Grid, either through the app or the phone or the internet, to make sure that they get a response, to make the lines safe.”

Stouter also advised, “Also, if anybody is using a generator, be cautious about carbon monoxide. Carbon monoxide can be deadly, so be sure that the generator is in a well-ventilated outside area, not in any garage or breezeway or porch. They should have carbon monoxide detectors, and also, they should make sure that the hookup to the generator is checked out by an electrician. You don’t want to put the National Grid workers at risk. Some people, if they incorrectly hook up a generator, can actually back fill the power lines, and that could energize power lines that the power company thinks are deenergized.” 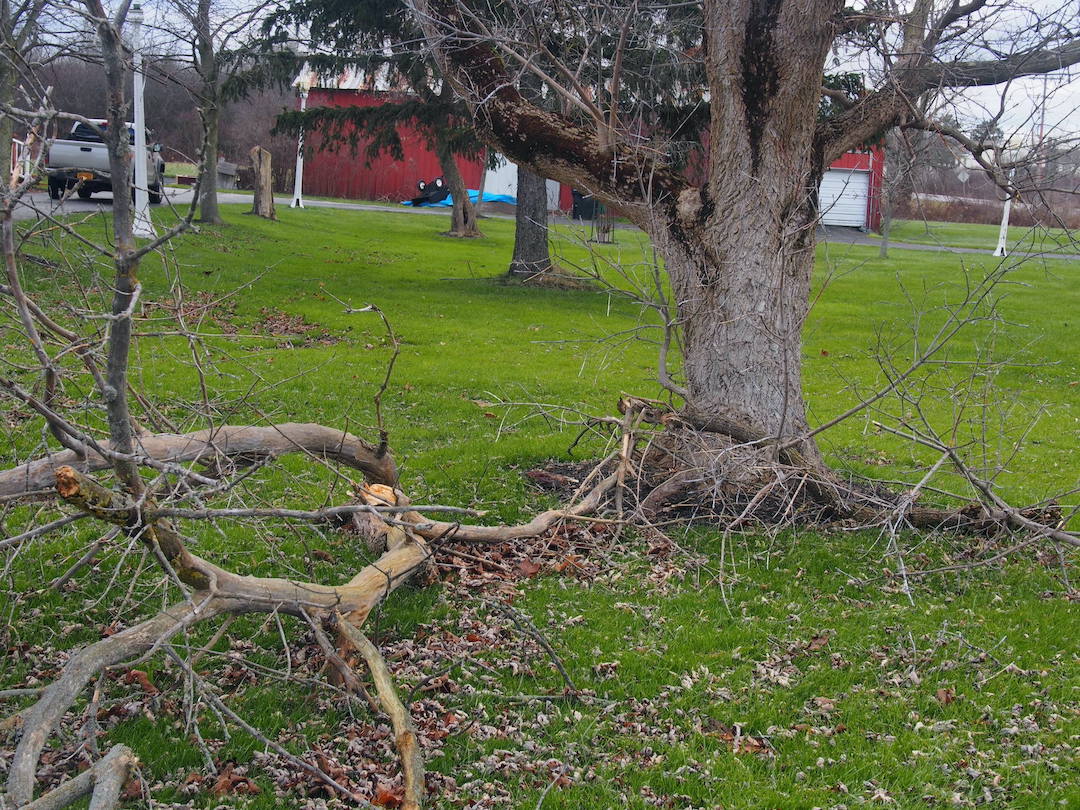 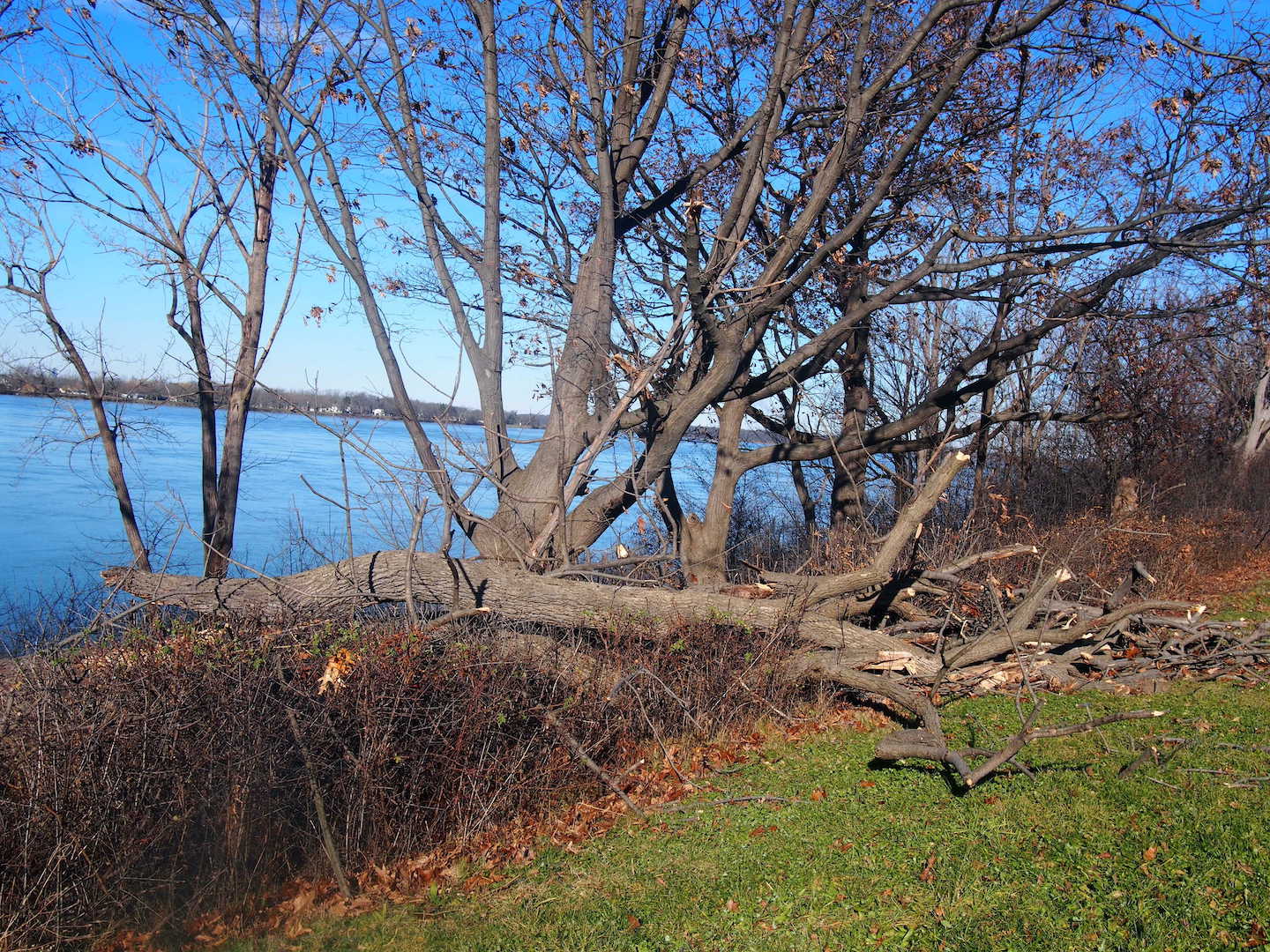