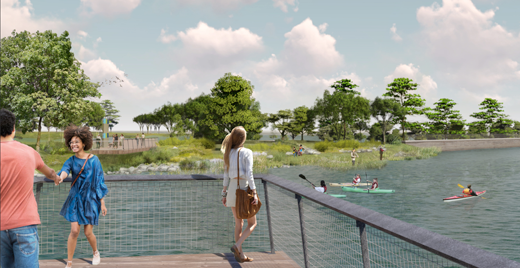 The Erie Canal Harbor Development Corp. (ECHDC) board of directors met and approved several items, including authorizing ECHDC to enter into a project partnership agreement (PPA) with the U.S. Army Corps of Engineers (USACE), Buffalo District, for the creation of a new wetland ecosystem in Buffalo’s Outer Harbor.

The project will address the severe degradation of coastal wetlands in the Niagara River system and across the Great Lakes by industrial development, resulting in hardening shorelines and diminished fish nursery and spawning habitats. The project, estimated at approximately $14.8 million, will use material dredged from the Buffalo River to create a new wetland habitat for fish and wildlife in the abandoned shipping Slip 3 adjacent to Wilkeson Pointe.

“As a city on the water, it is imperative that we restore and protect our healthy aquatic ecosystem,” ECHDC Chairman Robert Gioia said. “On Buffalo’s Outer Harbor, we are proud to partner with the Army Corps of Engineers on a project that will provide for a more productive, self-sustaining wetland and aquatic community for water-dependent wildlife.”

Lt. Col. Eli Adams, commander of USACE Buffalo District, said, “Nearshore placement to reestablish habitats is one of the most promising options for beneficial use of material dredged by the U.S. Army Corps of Engineers. Collaboration with our partners in New York state continues to help the Buffalo district identify innovative solutions and set the standard for restoring ecosystems on the Great Lakes.”

Congressman Brian Higgins said, “Wilkeson Pointe created a recreational destination that embraced the natural setting. “This project builds on the success of that site by improving the natural habitat in the adjacent water. I commend the Army Corps Buffalo District and Erie Canal Harbor Development Corp. for their partnership on this project. It is yet another example of how federal Great Lakes Restoration Initiative investment and the New York Power Authority relicensing settlement are continuing to transform Buffalo’s waterfront.”

Approximately 285,000 cubic-yards of sediment collected from the Buffalo River over a six-year period (an estimated three dredging cycles) will be used to create 6.7 acres of coastal wetland habitat in Slip 3 – which was identified by a multiagency committee as a habitat management opportunity in the Niagara River Area of Concern. The sediment slated for use is certified as clean by state and federal standards.

The habitat will also include gravel beds, rock piles, root wads, logs and existing dock piles to provide maximum habitat complexity and structure. Planting of native species will include submerged and emergent aquatic vegetation that can guard against invasive species and provide a high-quality aquatic habitat for both aquatic species and migratory/resident bird species.

ECHDC board’s authorization of the PPA allows USACE to begin the design and specification phase of this project. USACE plans to award a contract in summer 2022 for construction of a stone breakwater at the mouth of Slip 3, which will retain the dredged material and protect the wetland habitat.

The project is cost-shared 65% Federal (USACE) and 35% non-federal (ECHDC). The ECHDC board previously approved ECHDC’s portion of the project’s design costs in an amount not to exceed $451,150. Further action will be needed by the ECHDC board to approve ECHDC’s portion of the construction costs once a final design and a construction budget are determined. The ECHDC funding amount is not to exceed $4.52 million over a 10-year period. The funding is from the New York Power Authority, through relicensing agreements tied to the operation of the Niagara Power Project.

The feasibility study for this project was funded by the U.S. Environmental Protection Agency’s Great Lakes Restoration Initiative. GLRI funding has also been secured to complete design and specification.

The ECHDC board also approved:

•Authorization to amend the management agreement with Be Our Guest Ltd. for Canalside operations to extend the term for years six and seven. The BRG team will continue to be responsible for operations and maintenance, programming and event management, marketing and sponsorship, food and beverage management, and financial management of Canalside. The management agreement amendment with BRG to complete the scope of work will not exceed $2.5 million, while the total contract amount will not exceed $9.9 million.