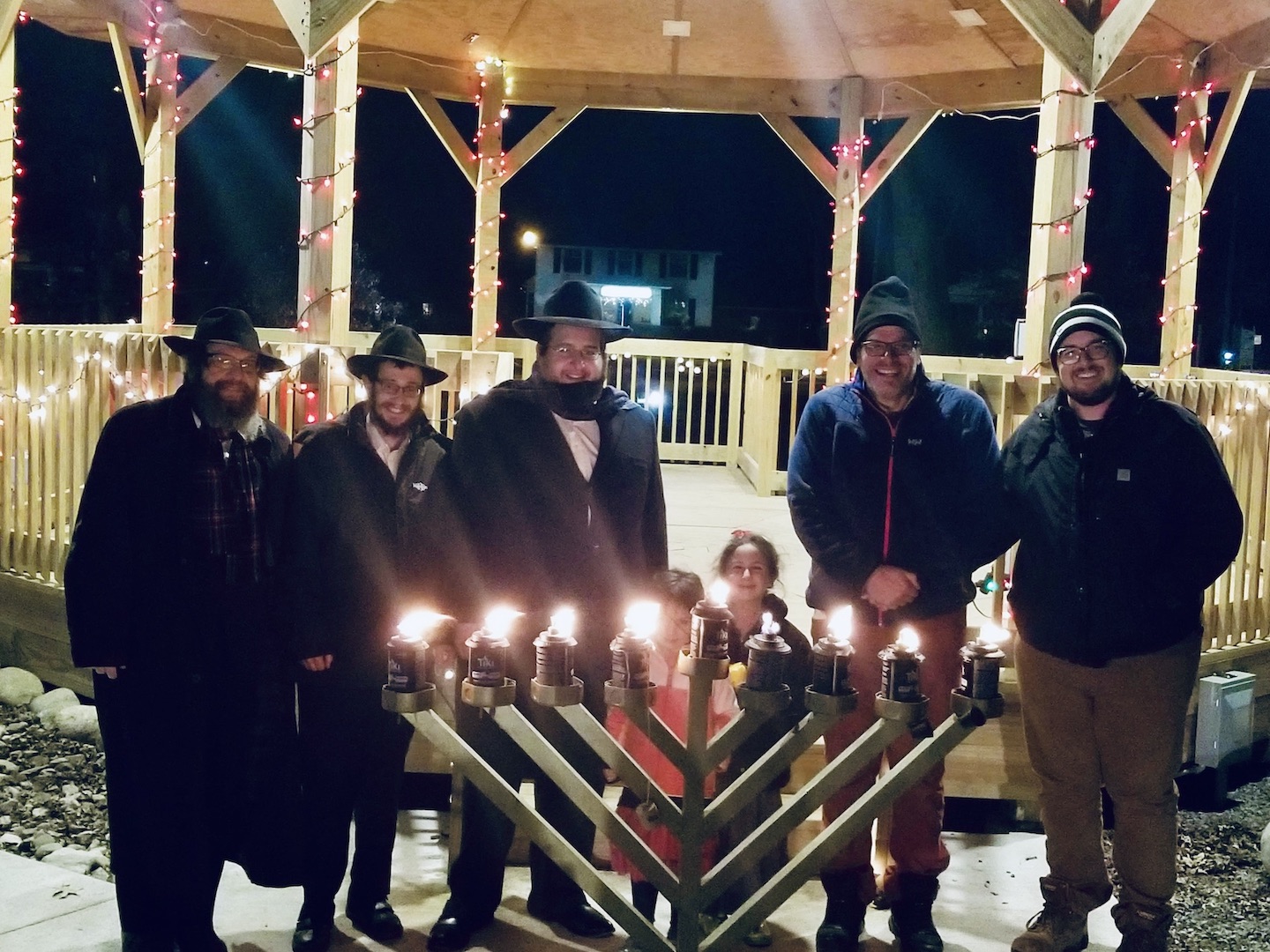 On the evening of Dec. 5, the last night of the eight-day Festival of Lights, a public menorah lighting and Chanukah celebration was held at Grand Island Town Commons. The event was coordinated by Chabad of Buffalo, a Jewish organization in Buffalo, and by a number of Island residents.

The event attracted about 30 participants. It featured a public candle-lighting ceremony, holiday songs, traditional hot latkes and fresh doughnuts. Complimentary Chanukah menorahs and candles were distributed for participants to light at home. The public Chanukah celebration was the first of its kind on Grand Island.

Everyone was really excited about the event.

“The holiday is so meaningful and joyous, and celebrating it in a public way makes it all the more special," said Rabbi Yosef Charitonow, one of the event organizers.

As inscribed on the cornerstone he laid for this project: "Hear, O Israel, the Lord our God is one Lord; ARARAT, A City of Refuge for the Jews, Founded by Mordecai Manuel Noah, in the Month Tishrei, September 1825 and in the 50th year of American Independence."

Mordechai Manuel Noah's project didn't prove successful. However, I believe that our Chanukah celebration on Grand Island fulfilled part of his dream. He wished to create a haven of freedom to practice and celebrate the Jewish religion and holidays, and we are proud to have rekindled the Jewish flame on Grand Island. We are fortunate to live in a country that stands by our values and protects religious freedoms. We celebrated our history by creating history on Grand Island with this first public menorah lighting.

“I have attended a similar event in Buffalo. It was really an uplifting experience. I decided we have to have something similar on Grand Island,” said Mr. Heath Frisch, one of the participants in this event.

"We have been living in Grand Island for 15 years, and we always wanted to have a Chanukah celebration; we were so excited to attend this event. This event was a great way to celebrate Chanukah with our family,” said one of the participants.

“The event brought back good memories of my childhood celebrating Chanukah in my hometown,” said Jane, a senior woman who participated at the event.

We hope to continue the Chanukah celebration in the future and make it a tradition on the Island.

Chanukah emphasizes that each and every individual has the unique power to illuminate the entire world. It was to encourage this profound idea that the Rebbe, Rabbi Menachem M. Schneerson, of righteous memory, launched the Chanukah awareness campaign in 1973. The menorah faces the street, the Rebbe notes, and so bypassers immediately ''feel the effect of the light, which illuminates the outside and the environment.”

Chanukah, the Festival of Lights, began this year on the evening of Nov. 28 and concluded on the evening of Dec. 6. It recalls the victory some 2,200 years ago of a militarily weak Jewish people, who defeated the Syrian-Greeks who had overrun ancient Israel and sought to impose restrictions on the Jewish way of life and prohibit religious freedom. They desecrated and defiled the Holy Temple in Jerusalem and sought to prevent the lighting of the menorah, which was part of the daily service. Upon recapturing the Temple, the Jewish people found only one jar of undefiled oil, enough to burn only one day, but it lasted miraculously for eight.

In commemoration, Jews celebrate Chanukah for eight days by lighting an eight-branched candelabrum known as a menorah. Today, people of all faiths consider the holiday a symbol and message of the triumph of freedom over oppression, spirit over matter, light over darkness.

More information about the holiday is available at www.Chabad.org/Chanukah.

Chabad of Buffalo offers Jewish education, outreach, and social service programming for families and individuals of all ages, backgrounds and affiliations. For more information, visit www.ChabadofBuffalo.com.