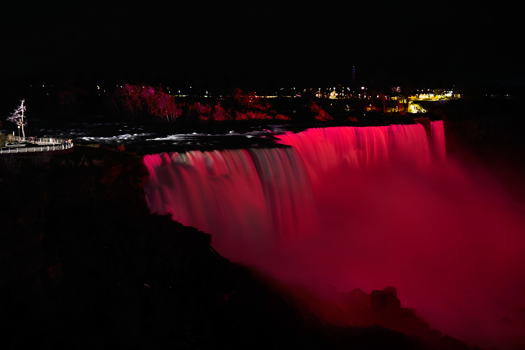 Niagara Falls was adorned in red light on Wednesday. (Photo courtesy of the Office of Gov. Kathy Hochul)

"World AIDS Day is a very solemn time for us to remember those we have lost to the HIV epidemic, as we raise awareness of this tireless battle that continues to this day," Hochul said. "This year marks 40 years since the first cases were reported. Even now, despite the progress we've made, people living with HIV continue to feel the pain of the stigma attached to this virus, and by lighting New York's landmarks we can take a moment to honor the 700,000 American lives that we have lost due to AIDS-related illnesses and recommit ourselves to ending the AIDS epidemic once and for all."

The bridges and landmarks to be lit in recognition of World AIDS Day included:

Hochul’s team said, “There has been remarkable scientific gains with the ongoing HIV threat, but it still continues to impact many lives domestically and globally. The theme for World AIDS Day 2021 is ‘Ending the HIV Epidemic: Equitable Access, Everyone's Voice,’ highlighting the global health inequalities that comes with nations and people affected by HIV.

“Globally, over 36 million people have lost their lives due to AIDS-related illnesses, and there is a continuing stigma against many affected populations such as gay, bisexual, and other men who have sex with men; racial and ethnic minorities, especially Black/African Americans and Hispanics/Latinos; cisgender and transgender women and girls; the LGBTQI+ community; those who use drugs; and other marginalized populations.”