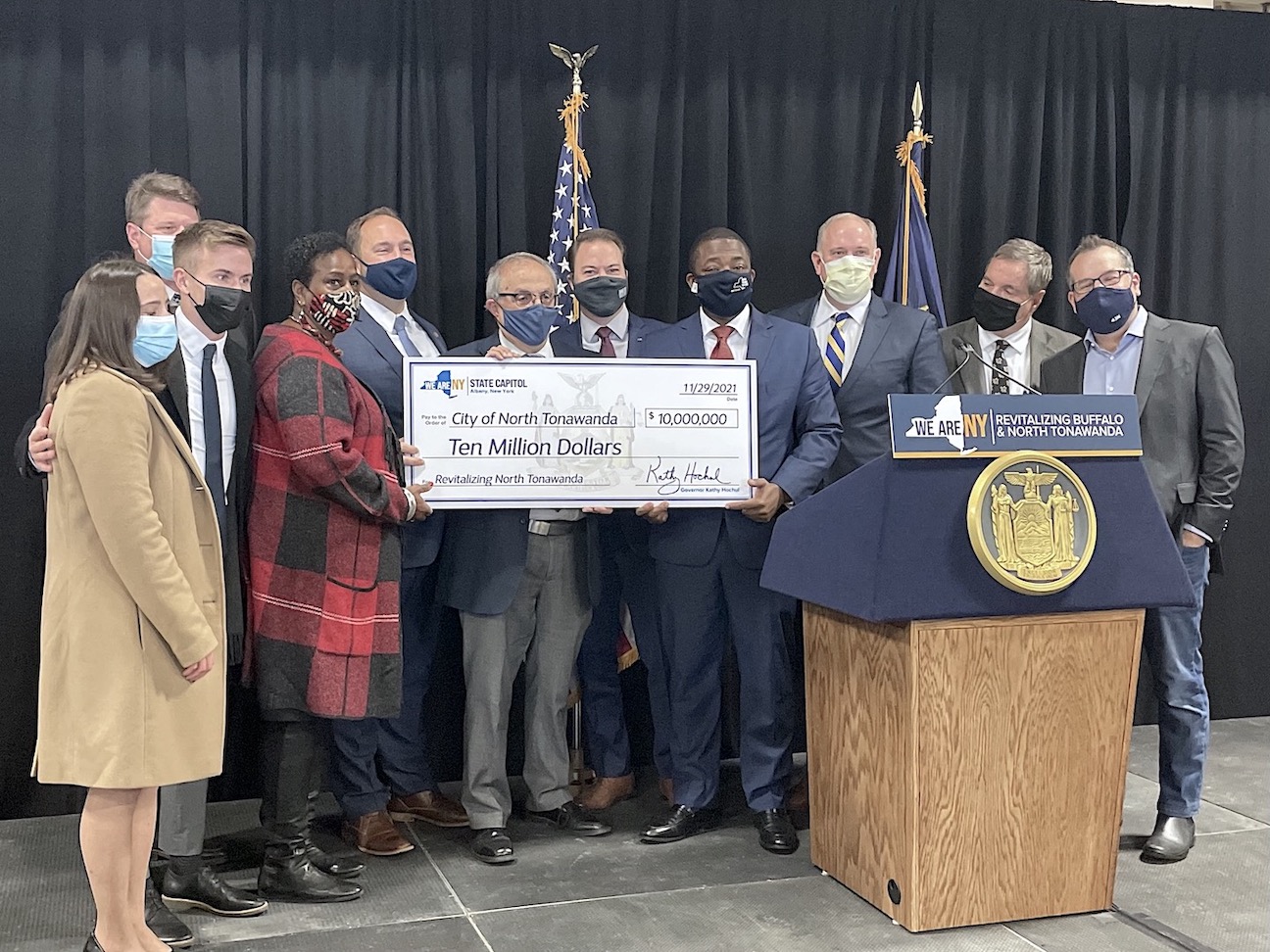 Gov. Kathy Hochul announced Buffalo's Broadway-Fillmore neighborhood and the City of North Tonawanda will receive $10 million each in funding as the Western New York region winners of the Downtown Revitalization Initiative. As part of DRI round 5, each of the state's 10 regional economic development regions are being awarded $20 million, to make for a total state commitment of $200 million in funding and investments to help communities boost their post COVID-19 economies by transforming downtowns into vibrant neighborhoods.

"As a Buffalo native, I know the impact this funding will have in improving the Broadway-Fillmore neighborhood and North Tonawanda," Hochul said. "The COVID-19 pandemic showed us just how important our small businesses and local communities are to the state's economy and, for New York to succeed, we must protect them. These investments will serve to show all that these communities have to offer, so that they will not just survive, but thrive as we build back toward a brighter future."

Lt. Gov. Brian Benjamin said, "As we continue to rebuild from the pandemic, these investments will bring a renewed sense of hope to Buffalo and North Tonawanda, as they have for the other communities who have been a part of the Downtown Revitalization Initiative. These funds will go a long way towards delivering the lively, livable and high-quality downtown that residents deserve."

A press release said, “Led by the Department of State, the DRI serves as a cornerstone of the state's economic development policy by transforming downtown neighborhoods into vibrant centers of activity that offer a high quality of life and attract redevelopment, businesses, jobs, and economic and housing diversity.”

In this round, Hochul doubled funding from $100 million to $200 million and allowed each Regional Economic Development Council to decide whether to nominate two $10 million awardees or one $20 million awardee for transformative and catalytic downtown redevelopment projects.

Like past DRI rounds, each selected community will develop a strategic plan through a bottom-up, community-based planning process that articulates a vision for the revitalization of its downtown and identifies a list of signature projects that have the potential to transform the downtown and leverage further private and public investments.

DRI funds will then be awarded for selected projects that have the greatest potential to jumpstart revitalization and realize the community's vision for the downtown.

Through the DRI, the New York State Energy Research and Development Authority will provide technical support to the awardees to assist them with including carbon neutral principles in support of the state's goal to reduce greenhouse gas emissions by 85% by 2050.

Located in the City of Buffalo's East Side, the Broadway-Fillmore neighborhood is one of the oldest in Buffalo, and the focus of Buffalo's plan for a downtown investment. The area, with a relatively dense stock of largely historic commercial buildings, set forth a vision of creating special urban places, key park spaces, retail-oriented streets, improved neighborhood connections, bike and pedestrian connections, streetscape improvements and public realm improvements.

This area has seen many completed and ongoing investments, including multiple mixed-use redevelopments, a community health hub, and improvements to the Broadway Market and Buffalo Central Terminal. Building on this momentum, Buffalo aims to encourage redevelopment of vacant structures, provide better connections between anchors and amenities through green space, increase affordable housing opportunities, and enhance the streetscape.

North Tonawanda aims to make downtown a vibrant, mixed-use district centered on the confluence of two waterfronts: the Niagara River and the Erie Canal, to create a unified and interconnected environment as the "Gateway to the Erie Canal.”

Downtown North Tonawanda is unique as it includes the 80-acre Tonawanda Island and is itself a local historic preservation district. With a demonstrated ability to pursue and implement large projects, including the $2.5 million Smart Growth Community Fund, the Remington Lofts project, and the $20 million River Road Apartments, and multiple ongoing projects, including the River Road Reconstruction project, $24 million Timber Shore project, and $3 million YWCA of the Niagara Frontier building, North Tonawanda wants to increase public/green space, improve senior housing, and improve infrastructure to support further development.

Hochul’s team said, “The Western New York Region Economic Development Council conducted a thorough and competitive review process of proposals submitted from communities throughout the region and considered all seven criteria below before recommending Buffalo's Broadway-Fillmore Neighborhood and North Tonawanda as the nominees.” Those include:

√ The downtown should be compact, with well-defined boundaries;

√ The downtown is able to capitalize on prior or catalyze future private and public investment in the neighborhood and its surrounding areas;

√ There should be recent or impending job growth within, or in close proximity to the downtown that can attract workers to the downtown, support redevelopment and make growth sustainable;

√ The downtown must be an attractive and livable community for diverse populations of all ages, income, gender, identity, ability, mobility and cultural background;

√ The municipality should already embrace or have the ability to create and implement policies that increase livability and quality of life, including the use of local land banks, modern zoning codes and parking standards, complete streets plans, energy-efficient projects, green jobs, and transit-oriented development;

√ The municipality should have conducted an open and robust community engagement process resulting in a vision for downtown revitalization and a preliminary list of projects and initiatives that may be included in a DRI strategic investment plan;

√ The municipality has the local capacity to manage the DRI process; and

√ The municipality has identified transformative projects that will be ready for near-term implementation with an infusion of DRI funds.

Buffalo and North Tonawanda will now begin the process of developing a strategic investment plan to revitalize their downtowns with up to $300,000 in planning funds from the $10 million DRI grant. Local planning committees made up of municipal representatives, community leaders and other stakeholders will lead the effort, supported by a team of private sector experts and state planners. The strategic investment plans will examine local assets and opportunities and identify economic development, transportation, housing and community projects that align with each community's vision for downtown revitalization and that are poised for implementation. The strategic investment plans will guide the investment of DRI grant funds in revitalization projects that will advance the community's vision for its downtown and that can leverage and expand upon the state's $10 million investment.

Plans for the DRI's fifth round will be complete in 2022.

Secretary of State Rossana Rosado said, "The Downtown Revitalization Initiative will help reinvigorate the economies for Buffalo's Broadway-Fillmore neighborhood and North Tonawanda as each works to rebound from the pandemic. The Department of State looks forward to supporting each community as they develop a strategic plan that will leverage private investments to create dynamic downtown areas that will benefit Western New York."

New York State Homes and Community Renewal Commissioner RuthAnne Visnauskas said, "The DRI program has proved to be an outstanding catalyst for locally driven, targeted economic development that has spurred not only restoration of important downtown resources, but has also driven millions of dollars in leveraged investment. HCR is proud to be part of this effort to deliver new housing and mixed-use development to our main streets. Great things are coming to North Tonawanda and the Broadway Fillmore neighborhood in Buffalo, and history shows us that many more investments in Western New York will follow."

NYSERDA President and CEO Doreen M. Harris said, "NYSERDA is looking forward to providing technical assistance and support to Buffalo and Tonawanda to incorporate carbon neutrality into their revitalization planning efforts. As we transition to a clean energy economy, I commend these and all cities, towns and villages committed to doing their part to reduce harmful greenhouse gas emissions and take action to ensure their communities are healthy."

New York State Sen. Tim Kennedy said, "The selection of Buffalo's Broadway-Fillmore neighborhood as a Downtown Revitalization Initiative awardee is exciting, and will provide state funding to generate new investments that support economic growth in the community. Congratulations to the Buffalo team for their work on the winning application, and my thanks to Gov. Hochul for continuing to keep Buffalo in the forefront. I look forward to seeing the transformation of this historic neighborhood."

Senate Minority Leader Robert Ortt said, "Mayor Art Pappas, Common Council President Bob Pecoraro, Niagara County Legislator Rich Andres, and those local partners tasked with bringing business and excitement back to the City of North Tonawanda have done an incredible job rejuvenating the downtown area. While serving as mayor of North Tonawanda, I recognized the importance of having a lively and energetic entertainment district for the residents of North Tonawanda. I have been thrilled to see the continuation of these efforts by the current administration. It is my hope that this upward trajectory for our growing downtown community continues, and I applaud New York state and the Downtown Revitalization Initiative for choosing to invest a further $10 million into our city."

Assembly Majority Leader Crystal Peoples-Stokes said, "The selection of Buffalo's Broadway-Fillmore neighborhood as a $10 million winner for the Downtown Revitalization Initiative will truly have a transformative impact on this entire area. This infusion of money into one of Buffalo's oldest neighborhoods will help ensure an equitable recovery of this urban area from the pandemic by supporting local businesses, creating new housing opportunities and leveraging private investments. I'd like to thank Gov. Hochul for her continued leadership in moving our state forward by investing in our downtowns."

Assembly member William Conrad said, "The Downtown Revitalization Initiative is great way to help communities to revive their economy and bring a new outlook for residents, visitors and business. Here in North Tonawanda, this $10 million investment will create a positive impact for the entire community and its many visitors. I commend Gov. Hochul for her commitment to this program, and congratulate all involved in securing this award for North Tonawanda."

Assembly member Angelo Morinello said, "This $10 Downtown Revitalization Initiative funding will go a long way toward helping North Tonawanda residents and businesses flourish by investing in infrastructure and creating more public spaces for all to enjoy. It is exciting time for North Tonawanda, and I'm grateful for Gov. Hochul's commitment to invest in this community."

Buffalo Mayor Byron Brown said, "What an amazing day for the City of Buffalo! Investing in our Broadway-Fillmore Neighborhood demonstrates New York's commitment to help our city continue to rebuild and rebound from the COVID-19 pandemic. I am grateful not only to Gov. Hochul for her continued support of Buffalo, but to the many dedicated community members who worked hard to put forth this vision. I look forward to working with the entire community to develop projects to help begin a bright new chapter for the Fillmore Neighborhood."

North Tonawanda Mayor Arthur Pappas said, "This is an exciting day for North Tonawanda, and I commend all in our community who put forward a comprehensive DRI package. We are grateful to Gov. Hochul for her support, and we look forward to all of the development that the $10 million DRI award will help bring to North Tonawanda."

WNYREDC Co-Chair and SUNY Buffalo State President Dr. Katherine S. Conway-Turner said, "The Downtown Revitalization Initiative is making a difference in Western New York. With its newest awardees – Buffalo's Broadway-Fillmore neighborhood and North Tonawanda – our downtowns will continue to make sustainable improvements that invite investment and placemaking, as well as residents and tourists to these communities."

WNYREDC Co-Chair and Campus Labs Co-Founder Eric Reich said, "Encouraging new investments that will lead to sustainable economic growth is key to the Downtown Revitalization Initiative. I congratulate Buffalo's Broadway-Fillmore neighborhood and North Tonawanda as the DRI's newest awardees, and look forward to seeing them work within their communities to development strong plans to revitalize their downtowns."

The Downtown Revitalization Initiative launched in 2016 to accelerate and expand the revitalization of downtowns and neighborhoods in all 10 regions of the state to serve as centers of activity and catalysts for investment.

In the first four years of the program, the state committed $400 million to invest in downtowns poised for revitalization and with potential to become magnets for redevelopment, business, job creation, greater economic and housing diversity, and opportunity.