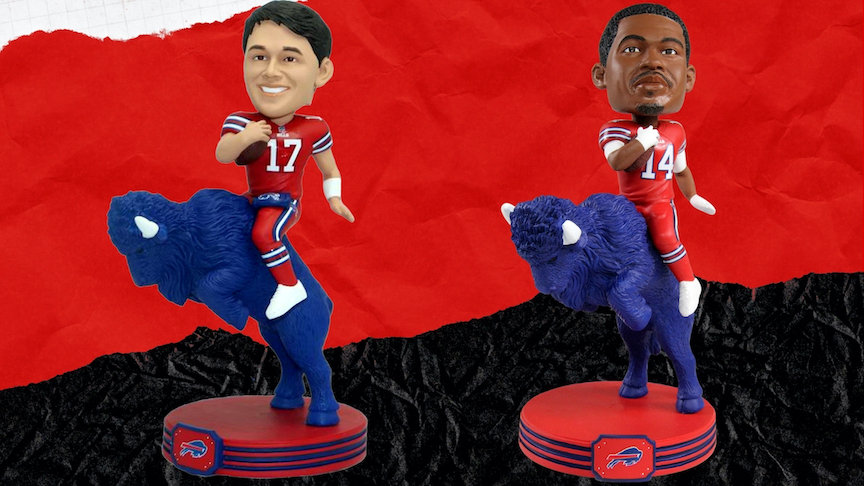 Bills fans can now purchase both a Josh Allen and a Stefon Diggs bobblehead from the National Bobblehead Hall of Fame and Museum. (Submitted image)

The National Bobblehead Hall of Fame and Museum announced the release of an officially licensed, limited-edition Stefon Diggs bobblehead featuring Diggs riding a buffalo. The release coincides with Diggs’ birthday and Cyber Monday.

Diggs has become a fan favorite in Buffalo and helped the Bills reach the top spot in the AFC East last season. He joins Bills quarterback Josh Allen in the riding bobblehead series.

Each bobblehead is individually numbered to only 2,021.

The bobbleheads are $40 each plus an $8 flat-rate shipping charge per order. They can be found at the following link.

This riding bobblehead series features some of sports' biggest stars and mascots riding on a relevant animal or object, with Diggs bobblehead featuring him riding a buffalo.

Diggs was born Nov. 29, 1993, in Alexandria, Virginia, and turns 28 on the day of the bobblehead’s release. He was traded to the Bills on March 20, 2020, and made an immediate impact with his new team. The speedster amassed 127 receptions and 1,535 yards – both career and league highs – to go along with eight touchdown catches as he was named first-team All-Pro for the first time in his career. He became the fastest receiver in franchise history to surpass 100 catches, and broke Eric Moulds’ team record for receiving yards in a season.

This season, Diggs has helped the Bills to one of the best records in the AFC.

A riding bobblehead featuring Allen was previously released, and the first batch sold out. Additional bobbleheads featuring Allen riding the buffalo are arriving in January and are available for preorder at http://bit.ly/allenriding.

“We’re excited to release this bobblehead of Stefon as part of our player riding series,” National Bobblehead Hall of Fame and Museum co-founder and CEO Phil Sklar said. “The Buffalo Bills have become one of the top teams in the NFL thanks to the addition to Stefon Diggs, and this bobblehead will be a must-have for Bills fans.”

The National Bobblehead Hall of Fame and Museum, which is located at 170 S. 1st St., in Milwaukee, Wisconsin, opened to the public on Feb. 1, 2019. The HOF and museum also produces high-quality, customized bobbleheads for retail sale as well as organizations, individuals and teams across the country.

The bobbleheads were produced and manufactured by FOCO.