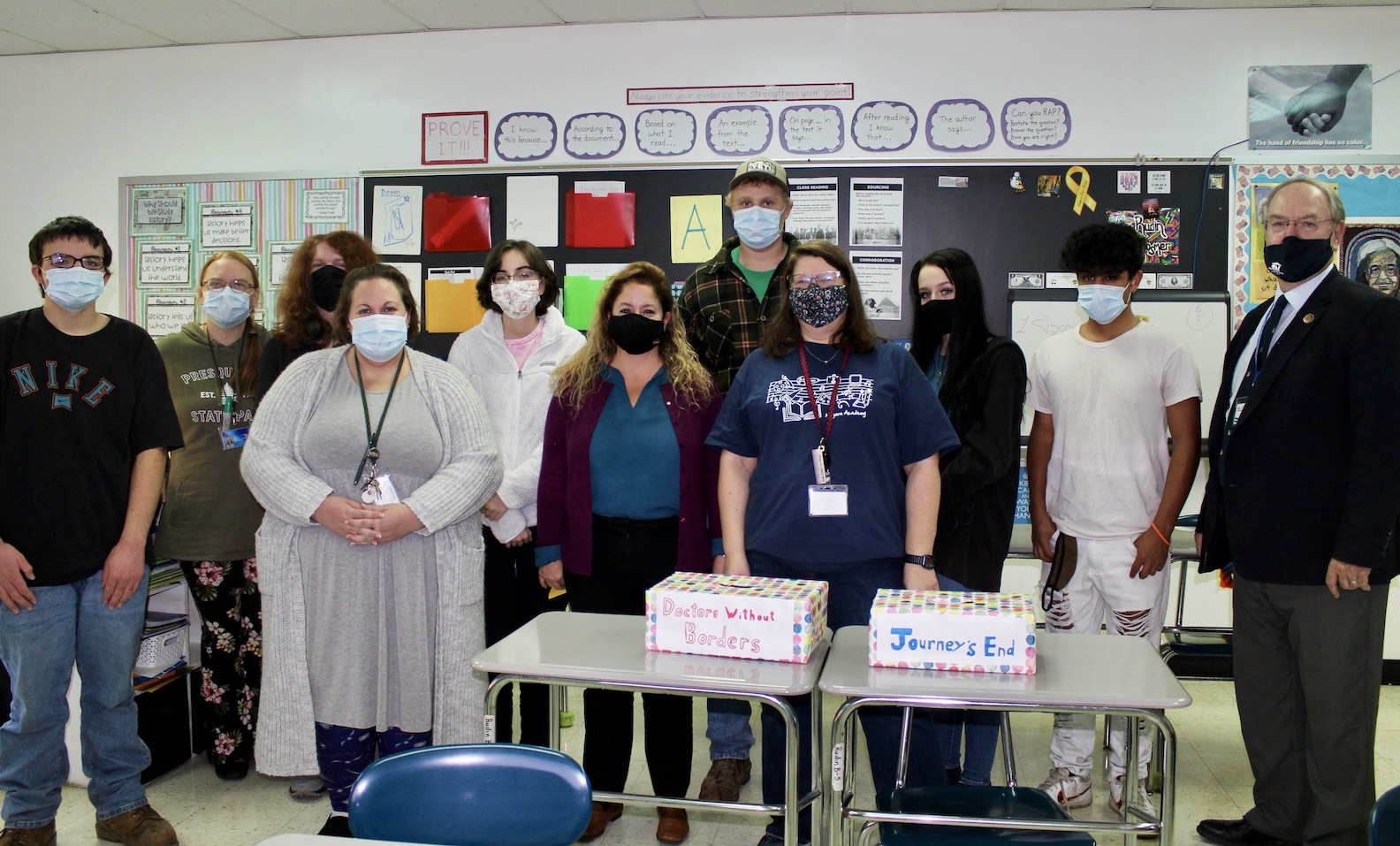 Orleans/Niagara BOCES’ Niagara Academy participation in government teacher Marla Rudin loves when a class discussion turns into positive experience not only for her students, but a charity.

“Recently in class, we were discussing the refugee crisis and human rights, and the students because very passionate about trying to do something to help not only refugees that have relocated here to the Western New York area, but also globally,” she said. “They felt it was very important to make a connection to these people and their plight, and decided to hold a fundraiser to benefit two charities: Journey’s End Refugee Services Inc. (local) and Doctors Without Borders (international).”

Journey’s End is a community-based organization with the mission of welcoming refugees without regard to ethnic origin or creed, and to assist them to become healthy, independent, contributing members of the community. Doctors Without Borders treats people where the need is the greatest. It is an international medical humanitarian organization that provides medical aid where it is needed most, mostly known for its projects in conflict zones.

The students started with a candy sale and were able to raise funds, but wanted to try to raise even more. One of the students, Trinity Nasca, said she would reach out to her cousins who own Ashker’s Juice Bar, located at 414 Amherst St., Buffalo, and see if they would be willing to help the class with its mission. Not only were owners Angelo and Sara willing to help out, they donated all the makings for the students to have a juice and latte bar.

“We were so touched by their generosity,” Niagara Academy Assistant Principal Michelle Kulbago said. “They are just wonderful people.”

The class, which is co-taught with Mrs. Brown and Mrs. Crego and Ms. Hosmer, tried out several recipes to come up with what they would offer at their juice bar. Student Jane Graser, who also attends the graphic communications program at the Niagara Career and Technical Education Center, volunteered to design a logo, labels for the juices, and flyers to advertise the sale. The date was set for Nov. 9.

The event was so popular, the 150 juices and lattes sold out in less than an hour. Customers picked which one of the charities they wanted their contribution to go to.

“I was so proud of our students,” Kulbago said. “Many were donating more than the cost that was set and, even when the juices were sold out, they kept donating. In the end, we raised $175 for Doctors Without Borders and $296 for Journey’s End. It really exemplifies the school culture we set here at the school on giving back and having compassion for others.”

Student Greg Warner said he and his classmates felt wonderful about the success of their juice bar: “It was great to be able to work together and help people who really need it.”

Trinity added, “We are so glad that we sold out and are able to donate to a good cause.”

Rudin said she was so proud of the students in her class and all the hard work they put in to make the event a success.

“They are a great bunch of students and they did an awesome job,” she said. “Our class conversation really opened up their eyes to what is going on in the world and their compassion was amazing. They really felt good about contributing and helping out others. We are hoping to do another fundraiser this spring.

“I cannot thank Asker’s Juice Bar for not only their generous donation, but coming in and role modeling for the students. It was a great experience all the way around.”