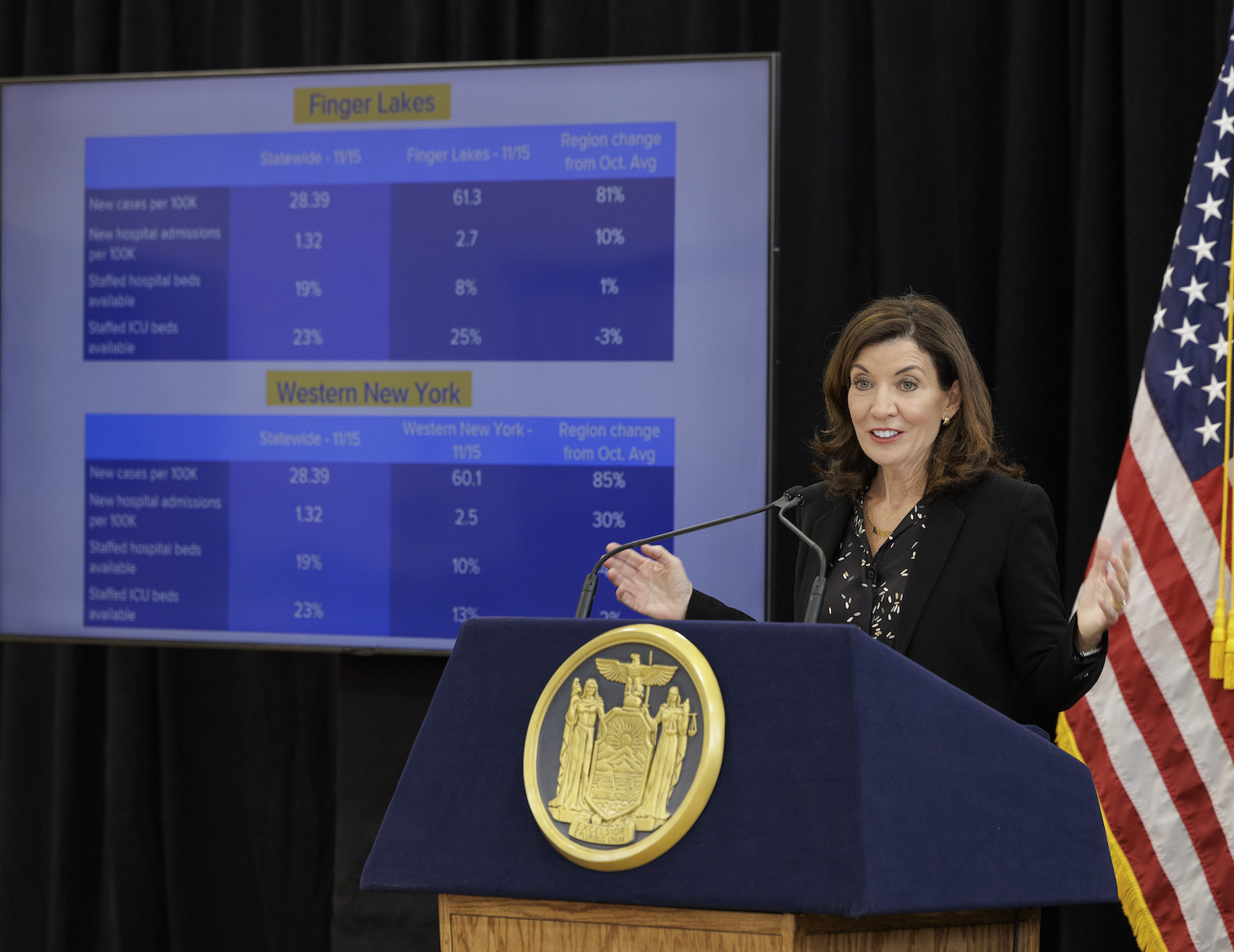 Gov. Kathy Hochul visited the Delavan Grider Community Center in Buffalo on Tuesday, providing a briefing on efforts to combat the coronavirus. She expressed concern for this region, which ranked No. 2 in the state with an 8.52% seven-day average percentage of positive test results. The three-day average one year ago was 5.2%.

“I am here because I'm personally deeply concerned about the rate of infection,” Hochul said. “Not just here in Western New York, but we're seeing in the Finger Lakes and some other regions.”

She added, “I'm going to send out a call to this community to help us change that dynamic now. We're heading into a vulnerable time. I want to make sure that we protect our kids in schools, keep our children safe, make sure people are safe in the workplace, safe when we gather for Thanksgiving.”

Hochul explained, “We are seeing the spikes go up. We are seeing the numbers continue. Over 8% here in Western New York. And a lot of it's concentrated in our rural areas. We're very aware (of) that. There is a direct correlation between people being vaccinated and the infection rate.

“It's extraordinary to think where we were a year ago. We had no hope. We had no weapons in our arsenal to fight back against this, this deadly pandemic. We were talking about a vaccine, praying for a vaccine, hoping that it would finally come and it did come. When we were able to start vaccinating people in nursing homes and in congregate settings and our most vulnerable seniors, we finally felt we had some hope.

“And then through the spring, making sure that we had enough supply and making sure that we could get them out to people who were, again, were vulnerable, but ultimately to other age groups and other populations. And all of a sudden, the supply was not a problem; it was creating the demand. We reached this turning point where there was plenty for people who wanted to get vaccinated, but we just couldn't even get them out to enough people and people started rejecting them. People were saying, ‘I'm turning my back on this opportunity.’ They did not want to be vaccinated.

“So, in one week we've gone from one region hitting those higher numbers to five of them. We also have hospitalizations. I loved it when the numbers were going low, you can see that number is starting to trend in the wrong direction, if it flat lines that's one thing. But a week ago or two weeks, a couple of weeks ago, we had 206 hospitalizations of Western New York. Today we have 299. That's a lot of people.”

Hochul said, “Infection rates are high. Our vaccination rates should be higher.

Hochul said, “There was talk a year ago that it wasn't really going to hit the younger kids. So, it's all about senior citizens, older people who were sick. That theory has been blown out of the water. Look at what we're having, the number of cases regarding young people now. Breakthroughs. This is very troubling and it does not mean you should not get a vaccination. You must get that vaccination. And these numbers still verify that the vaccination is the safest thing to do.”

She explained “When you are vaccinated, your chance of really getting sick or ending up in a hospital are dramatically decreased … your chances of hospitalization are reduced by 95% if you do get the vaccine.”

Hochul said Western New York’s numbers are increasing because “People are starting to head indoors. They're outside a lot over the summer. All the outdoor dining was fun. It's getting a little colder now. People are just getting more complacent and more casual.

“There was a time a year ago where when you gathered with family, you had a mask on indoors. You know, people were following those protocols. They were being smart about it.”

Hochul said Western New York’s fully vaccinated rate is 70%. With that, and heading into the holidays, “We have to fix it. We have to fix this,” she said. “I want to celebrate Thanksgiving safely. I want to know that when we get together that we're not going to get one of our loved ones sick. We all went to this anxiety a year ago. We thought that was the last time, we declared, ‘By this time next year, I'm sure we'll be fine. We'll have that vaccine.’ And because there are still holdouts, we cannot declare that it's going to be completely safe.

“So, how do you get rid of this pandemic? It is so simple. It is so simple. Get more people vaccinated and get the booster if you haven't had it. Wear a mask indoors, maintain the distance. And I know this is so frustrating because no one wants to hear this again, but we really should be avoiding large gatherings and indoor spaces.

With regard to boosters, Hochul lowered the eligibility bar.

“I want to be clear about that. If you live in a high transmission area, there is risk. If you personally feel that risk – and it'd be hard to imagine anybody who doesn't, because you're among people; you're at work; you're in, sometimes, in public transportation – you should be getting a booster shot now.”

“I'm giving everybody a chance. I'm getting the word out, saying this is reaching a situation that is untenable,” she said. “The numbers are far too high. We have the answers. We have to get people vaccinated and get people the boosters. And I want our local health departments to know, and our local county executives, that I have their backs when they need to take steps to move forward and have more protocols in place as they do in some other parts of the state. Particularly New York City. I will have your backs on this. I will support you and I'll give you the resources that you need to make it happen.

“Let's get more shots in arms. Let's have more measures in place for social distancing and masking. And let's just talk about getting through this. Let's get through this. … If there's no progress, we're going to have to have stricter measures.”

She added, “We're not coming in to be heavy handed and dictatorial. We want to liberate to local governments to do what they do best, but be there as their allies at their sides to make sure that they have all the resources they need, whatever approach they want to take. But at some point, if the numbers don't start on a downward trend, we're going to have to talk about larger protocols, which we all know are available to us.”

“They're all available to us. So, this is the warning. The warning is going out loud and clear today. And I truly hope that the community at large will listen to this, because it doesn't have to be this way. It doesn't have to be. We can do better. I believe that. And I know you know that as well, so thank you all for being my allies. And someday we'll all emerge from the foxhole. We're just not there yet.”