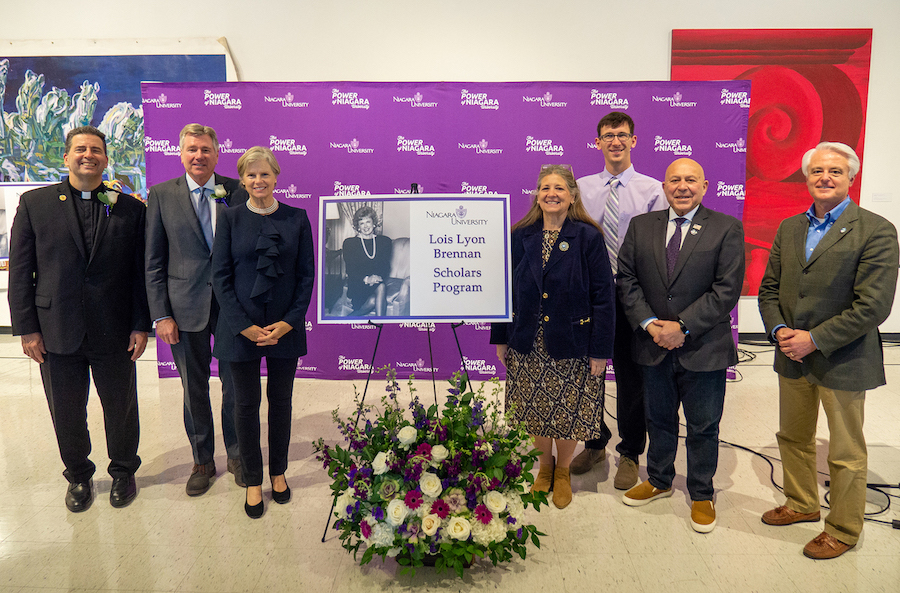 The scholarship program, named the Lois Lyon Brennan Scholars in recognition of Brennan’s mother and his family’s legacy of investing in access to higher education, will offer high-achieving students from under-resourced regions financial support for tuition, room and board, and books for their four years at Niagara University. Acceptance into this program allows for financial support to enhance persistence, academic excellence, engagement on campus (residency) and graduation. A particular emphasis will be given to first-generation college students from national and regional areas, including Niagara Falls, Tuscarora/indigenous communities, rural districts in New York, and urban areas.

“Ed and Deborah Brennan have continually demonstrated their commitment to education and their unwavering support for those who may live their life on the margins of society,” said the Rev. James J. Maher, C.M., NU president. “Today, we are excited to launch the Lois Lyon Brennan Scholars Program, and we are extremely grateful to Ed and Debbie Brennan for living their lives with Vincentian hearts, for their continued commitment to education, and for their incredible support of Niagara University. Through their generosity, not only will they influence the lives of Niagara students, but we know that these scholars will create an impactful and lasting change in the Vincentian tradition.”

Students selected as Lois Lyon Brennan Scholars will participate in high-impact practices, including study-abroad and community service, and complete a related capstone course as part of the program. These opportunities will elevate their engagement with the campus, enhance their leadership skills, and increase their global awareness, creating a path to both graduation and career success.

“Debbie and I are extremely pleased to build upon our mission of providing education to the underserved,” Brennan said. “The Lois Lyon Brennan scholarship program builds upon our commitment to helping the underserved, which includes the construction of a school, and scholarships for roughly 400 students in Haiti. As an alumnus of Niagara University, I welcome the opportunity to bring our Vincentian values and inclusive excellence to high-achieving students who may not have this access to college and the engaging experience that leads to success.”

He currently serves as the chairman of NU’s board of trustees, and was chairman, president and CEO of Duty Free Shoppers (DFS) Group Ltd. During his 25-year career with DFS, Brennan led the organization through substantial expansion, navigating the economic climate while investing for the future. He was an early visionary of the potential growth of the Chinese consumer and, in 2003, made the strategic decision to move DFS headquarters from San Francisco to Hong Kong. Under his leadership, the company became a more than $5 billion global company and was named “Retailer of the Year” by Duty Free International. He remains active with DFS as a nonexecutive director.

Debbie Brennan’s family has owned and operated Beak & Skiff Apple Orchards in Lafayette. The Brennan’s son, Eddie, and daughter-in-law, Marianne (fifth generation), now own and operate the farm. Ed also serves as CEO of the Miller Family businesses based in Hong Kong, and on the board of directors of New Age Corp.

Previously, Edward Brennan had a 16-year career with R.H. Macy’s and Co. and Federated Department Store, Inc., holding positions including senior merchant for Macy’s East, with responsibility for $1.6 billion in company sales; and president of one of Macy’s merchandise divisions. In 1995, he was one of 200 executives and other employees who purchased the then-struggling Macy’s department stores.

NU said, “Brennan’s business acumen is matched by his philanthropic endeavors, and he has long been committed to education with a great love for international students and those from under-resourced communities. He is co-founder and chairman of Hand in Hand for Haiti, an organization that built a world-class educational facility in the coastal town of Saint-Marc in Western Haiti to provide access to education for children and youth in the most underserved communities of that country.”

In 2016, the Brennans provided a financial gift to NU to honor his father and establish the Edward A. Brennan Center for Language, Culture, and Leadership. He continues to be active in the work of the center, which focuses on leading, learning, and serving the needs of international families and students, as well as English language learners within the community through agencies that serve the needs of refugee, migrant and immigrant populations.