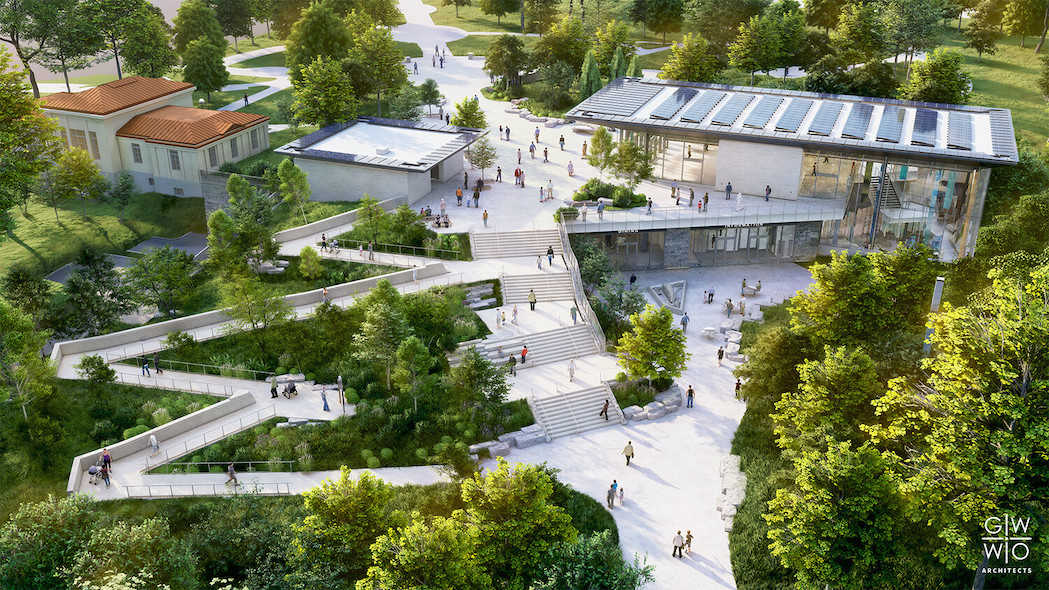 Gov. Kathy Hochul on Friday announced the beginning of construction for a new, $46 million state-of-the-art visitor center in Niagara Falls State Park. The new facility, her team said, “will be a gateway to adventure along the Niagara River Corridor, greatly improving the visitor experience, complementing nature, and increasing the length of visits within the park in all four seasons. The newly built center will welcome new and returning sightseers, enhancing awareness of regional recreational and cultural offerings.”

Hochul said, "Niagara Falls is a wonder of the world unique to Western New York, and it's awe-inspiring beauty has been preserved with Niagara Falls State Park, the oldest state park in the United States. This new Welcome center builds on our work to showcase all of the landmark gems that New York state has to offer, attracting visitors from around the world and boosting our tourism economy."

A press release noted the new, 28,000-square-foot visitor center design will open a more seamless pedestrian connection between the falls and the city's downtown business district begun with the completion the welcome plaza last year. Demolition of the 35-year-old original visitor center will create more open views of the American Falls. The facility will include new ticketing and information desks; interpretive museum space, including an immersive experience and exhibits on a diversity of topics including natural, industrial and Indigenous American history; provide information for visitors about opportunities unique to the region; new concession spaces; restrooms and associated support spaces.

The glass, steel and concrete facility has been designed to complement nature and include a rooftop solar array, green roof elements and a separate restroom building. Enhanced site amenities include new, accessible paths; plantings; outdoor exhibits, and interpretive and wayfinding elements. More than 100 new trees will be planted to replace those removed during construction. The existing 7,000-square-foot regional administration building immediately adjacent to the facility will be adapted to include a multipurpose community room, regional archives, and offices for Niagara regional interpretive staff.

R.P. Oakhill has been designated as the contractor for the project, which is slated to begin immediately and wrap up by Memorial Day of 2023. G.W.W.O., a national leader in visitor center development, is the architect. Haley Sharpe Design is doing the interior interpretive exhibits. The center is slated to open in spring 2023. 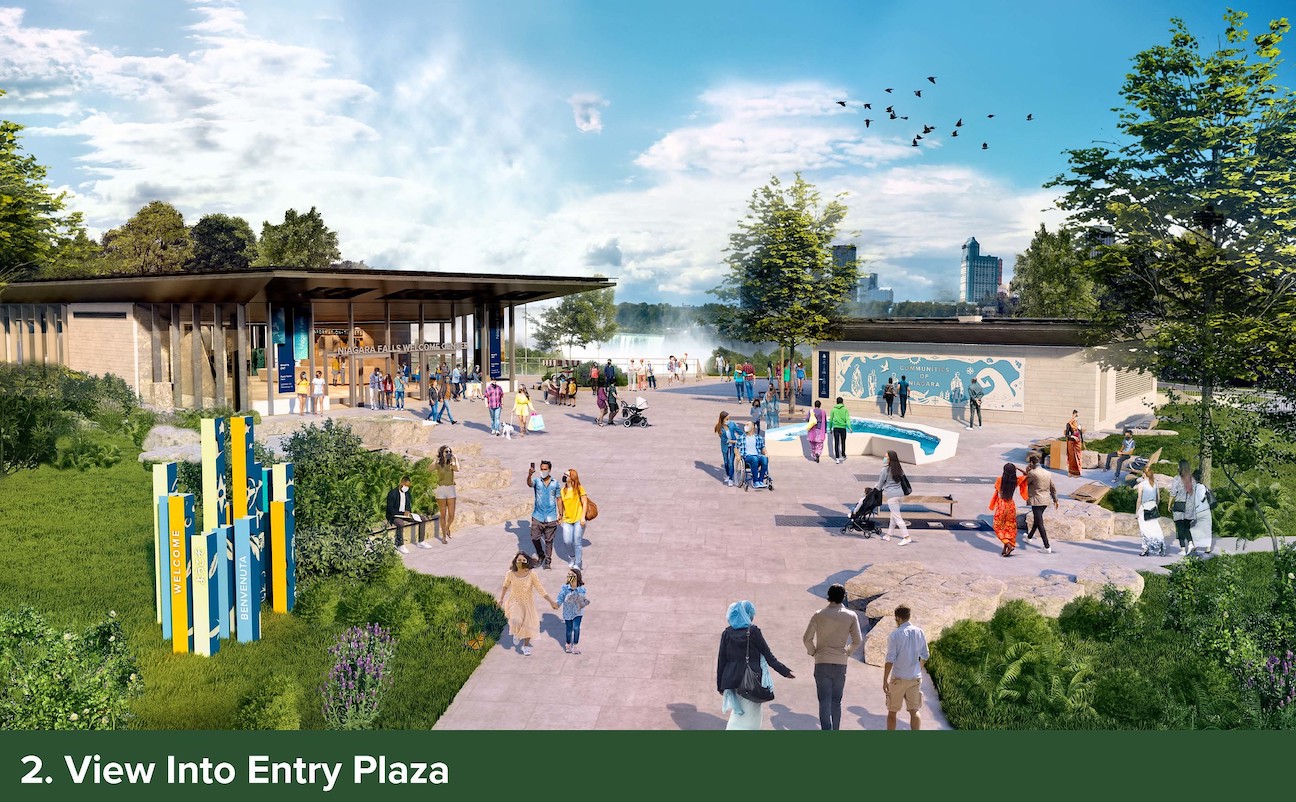 The not-for-profit Ralph C. Wilson, Jr. Foundation, created after the 2014 death of Wilson – the former owner of the Buffalo Bills and a co-founder of the American Football League – will contribute $8 million toward the project. The foundation continues Wilson's legacy of support for tourism, parks and outdoor recreation, trail development, and community revitalization in Western New York.

State Parks Commissioner Erik Kulleseid said, "I am grateful to Gov. Hochul for her ongoing support of all of our state parks as well as to the Wilson Foundation for their commitment to this project. I am so excited that we will have a state-of-the-art facility to share the special stories and the remarkable history of Niagara Falls, and encourage our visitors to explore the many attractions found in the City of Niagara Falls and throughout the region."

Ralph C. Wilson, Jr. Foundation President and CEO David O. Egner said, "The incredible level of detail and thoughtfulness put into the reimagined welcome center will contribute greatly towards enhancing and boosting Niagara's tourism and outdoor recreation economy. Through the foundation's support, we're proud to help accelerate and advance the construction of this landmark project along the Niagara River Greenway."

Congressman Brian Higgins said, "Niagara Falls is an iconic destination in Western New York that draws millions of people from around the world each year. The construction of a new visitor center establishes a modern entry point for visitors that better connects to the park's natural landscape and tells the stories of Niagara Falls' past and present."

New York Stet Sen. Rob Ortt said, "The creation of this new welcome center will allow visitors to explore all of the history and experiences that our beautiful state park has to offer while expanding upon the completion of last year's welcome plaza. The continued efforts to grow the connection between our state park and downtown Niagara Falls will only serve to benefit both entities and the residents who operate shops and restaurants within our city's business district. I commend New York state's continued commitment to the beautification and increased visitor immersion at the natural wonder of the world we are lucky enough to have located in our backyard."

Assemblyman Angelo Morinello said, “I applaud Gov. Hochul for her continued focus on insuring that Niagara Falls State Park remains a world-class destination. The new center will assist the millions of visitors to not only learn and understand the history of the region, the significance the falls itself but will also direct them to the downtown business district. This addition will add to the ‘park within a city’ vision and removal of any marriers between the park and the city."

City of Niagara Falls Mayor Robert Restaino said, "We appreciate the continued improvements to our Niagara Falls State Park. The new welcome center will not only improve the initial visitor experience, but it also promises to add to it by exploring all that Niagara Falls has contributed to the growth of Western New York. I would like to thank Gov. Hochul for her continued commitment to our city and our region."

Destination Niagara USA President and CEO John Percy said, "The investments that have been made to improve the Niagara Falls State Park over the last several years have been nothing short of extraordinary. A new, state-of-the-art facility that provides visitors with year-round access to a superior experience is a much-needed and highly anticipated addition to the park. I commend New York State Parks for developing a facility that tells the stories of our region and its rich history, which will encourage visitors to explore our entire destination." 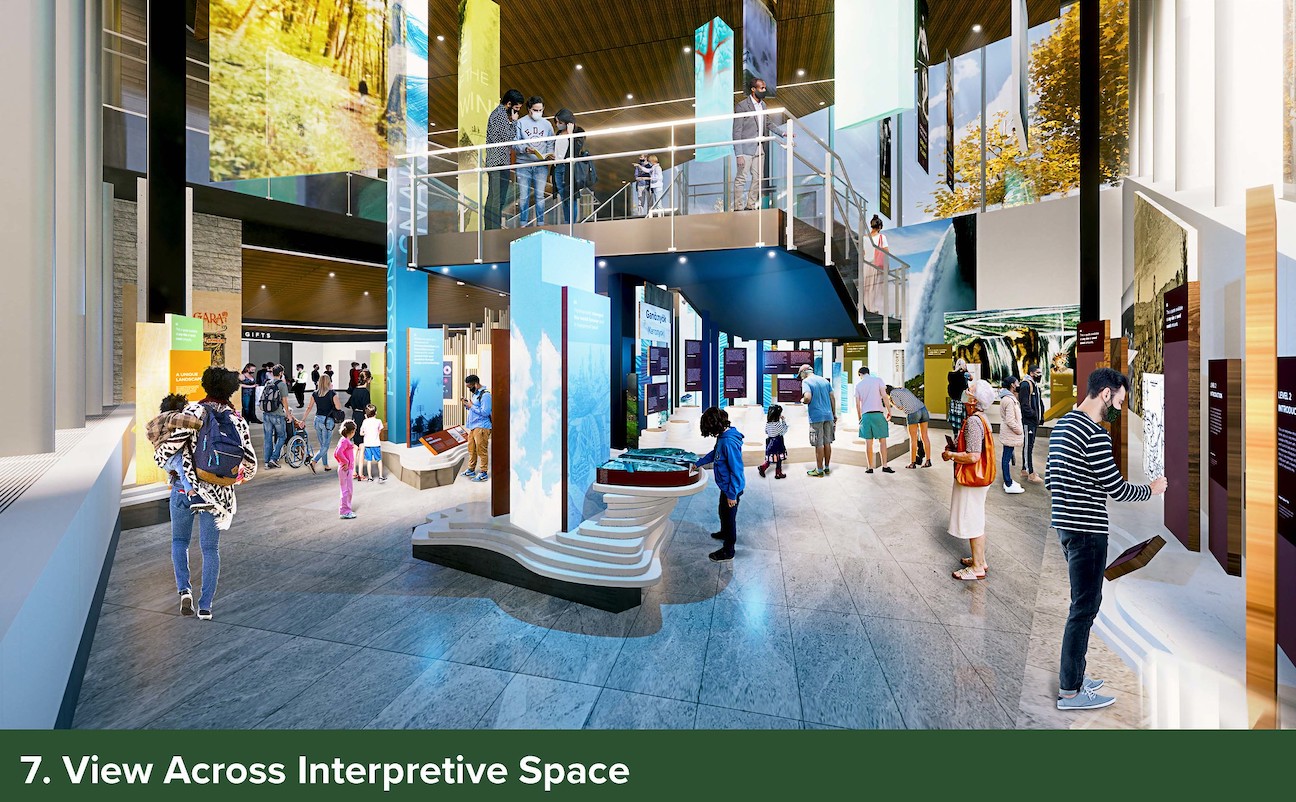 Created in 1885, Niagara Falls State Park is the oldest state park in the nation, attracting over 9 million visitors annually.