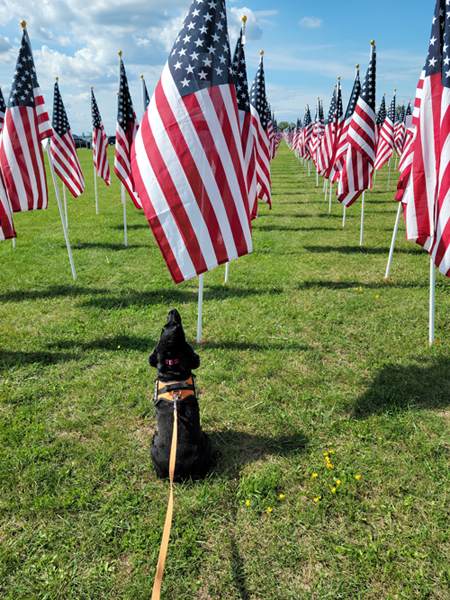 Wheatfield resident Cheryl Raffel and her dog, Minnie, went to Gratwick Park Sunday for a walk and also to visit the Healing Field flag display, which was created to honor those lost on Sept. 11, 2001. (Submitted photo)

To mark the 20th anniversary of 9/11, Gov. Kathy Hochul signed three pieces of legislation to ensure all first responders who participated in the World Trade Center rescue, recovery and cleanup operations can access benefits available to them. The bills, her team said, make it easier for WTC first responders to apply for WTC benefits, by both expanding the criteria for defining WTC first responders and allowing online submissions of notice that members of a retirement system participated in WTC rescue, recovery, or cleanup operations.

"As we mark the 20th anniversary of a day that touched the lives of every single New Yorker, we remember those we lost and honor those who are with us today who participated in the World Trade Center rescue, recovery, and cleanup," Hochul said. "These laws will help not only first responders who were at the World Trade Center on that terrible day and those who cleaned the site for weeks afterward, but also the emergency dispatchers and communications personnel who keep us safe today. We will ensure they receive the support and benefits they deserve."

•Expanding the Criteria to Define First Responders Who Participated in the World Trade Center Rescue: This legislation (S.4961-B/A.6384-A) expands the definition of a member who participated in WTC rescue. The term "member" will now include any person who is currently a member of a public retirement system, irrespective of whether the employee was a participant of the system at that time. The employee must have become a participant in the retirement system since that time and purchased service credit for some or all of qualifying period.

New York State Sen. Andrew Gournardes said, "In the hours, days, weeks and months after the towers fell, thousands of public workers were sent down to the World Trade Center to begin the difficult work of rescue, recovery and cleanup. The work they did was nothing short of heroic. Today, 20 years later, many are now suffering from 9/11-related illnesses and, tragically, many have already passed away.

“While a great many strides have been made over the years to ensure those responders received 9/11 disability benefits, a glaring loophole remained that made workers who were not part of the retirement system ineligible for any support or benefits. I'm grateful to Gov. Hochul for signing my legislation, S4961, which closes this loophole and ensures that those responders who became members of the retirement system at a later date can still access the same disability benefits that the heroes they worked shoulder-to-shoulder with receive."

Assembly member Peter Abbate said, "As we commemorate the 20th anniversary of the 9/11 attacks, I am happy to see Gov. Hochul's commitment to ensuring that all who were employed in qualified service during the World Trade Center rescue, recovery and cleanup operations will be eligible for the same well-deserved benefits that others have received."

New York State AFL-CIO President Mario Cilento said, "This bill is another important step to ensure that all workers who were involved in the rescue, recovery and cleanup at the World Trade Center during and after the 9/11 terrorist attacks will no longer be denied the benefits that they and their families are entitled to. In the midst of the current COVID crisis, it is truly sobering that it has been such a lengthy struggle for too many selfless heroes – to have to wait so long for the same respect and care that they gave to others. In signing this bill, Gov. Hochul has shown that she supports our 9/11 heroes and, through many other actions, she has shown she stands with all workers who have laid their well-being on the line. We thank her for her commitment and we thank Assemblyman Abbate, Sen. Gounardes and the Democratic majorities in the Senate and Assembly for their tireless efforts for our 9/11 workers."

•Increasing Accessibility in Applying for WTC Benefits: This legislation (S.7009-A/A.6934-A) creates an online option for filing a "WTC notice of participation" statement with their retirement system to be eligible for WTC benefits. This bill would allow systems to accept an electronically submitted "WTC notice of participation" through an online portal, rather than a written statement.

This bill seeks to streamline the system for filing WTC notices of participation by allowing for the electronic filing of these notices with a member's retirement system to ensure that anyone who participated in rescue, recovery and cleanup can avail themselves of the World Trade Center benefits.

New York State Sen. Diane Savino said, "On this somber 20th anniversary of 9/11, I thank Gov. Kathy Hochul for acting swiftly and signing this important legislation into law. Allowing a member to electronically submit the WTC notice of participation through a secure online portal is just a commonsense use of technology to streamline getting benefits to either the workers or loved ones of those who answered the call during the rescue, recovery and response to the attack on the World Trade Center."

New York State Sen. John Brooks said, "New York's emergency operators and dispatchers provide invaluable services to us all. It is long past time we remove existing roadblocks that prevent these essential emergency workers from providing the full range of support they can give and denying them of benefits they deserve. Without question, all public safety dispatchers, emergency responders, emergency operators, emergency complaint operators, and emergency services dispatchers are first responders, and it is crucial to the safety and welfare of New York state that they are recognized as such. As a first responder myself, I am grateful to Gov. Hochul for signing this important legislation into law."

Local 1549 Clerical Administrative Employees President Eddie Rodriquez said, “Local 1549 wants to thank Gov. Hochul for signing the first responders in communications bill. Her signature signifies her administration’s respect and acknowledgement of the valuable and unmatched dedicated work-life of 911 operators. This action sends a very important message that those who labor under very stressful and traumatic circumstances are recognized, valued and entitled to services that will allow them to do their jobs more effectively with less turnover. This signature will boost the morale of these workers and recognizes them for the heroic work they do."

Hochul has proposed legislation that would allow National Guard members to qualify as veterans under New York law. She has also issued a citation honoring members of the New York National Guard for their exemplary service both during and after the events of Sept. 11, 2001.

"Many New York National Guard members who responded on 9/11 are not eligible for important support services and valuable federal and state benefits because they were called to duty that day by a state emergency order and not on federal active duty," Hochul said. "On the 20th anniversary of 9/11, I am introducing legislation that will ensure that all of the National Guard members who were ordered into service at Ground Zero, and who have not otherwise earned Veteran status through federal activation, are fully recognized as veterans under New York state law. The New York National Guard was there for us on that dark day, and we will be there for them."