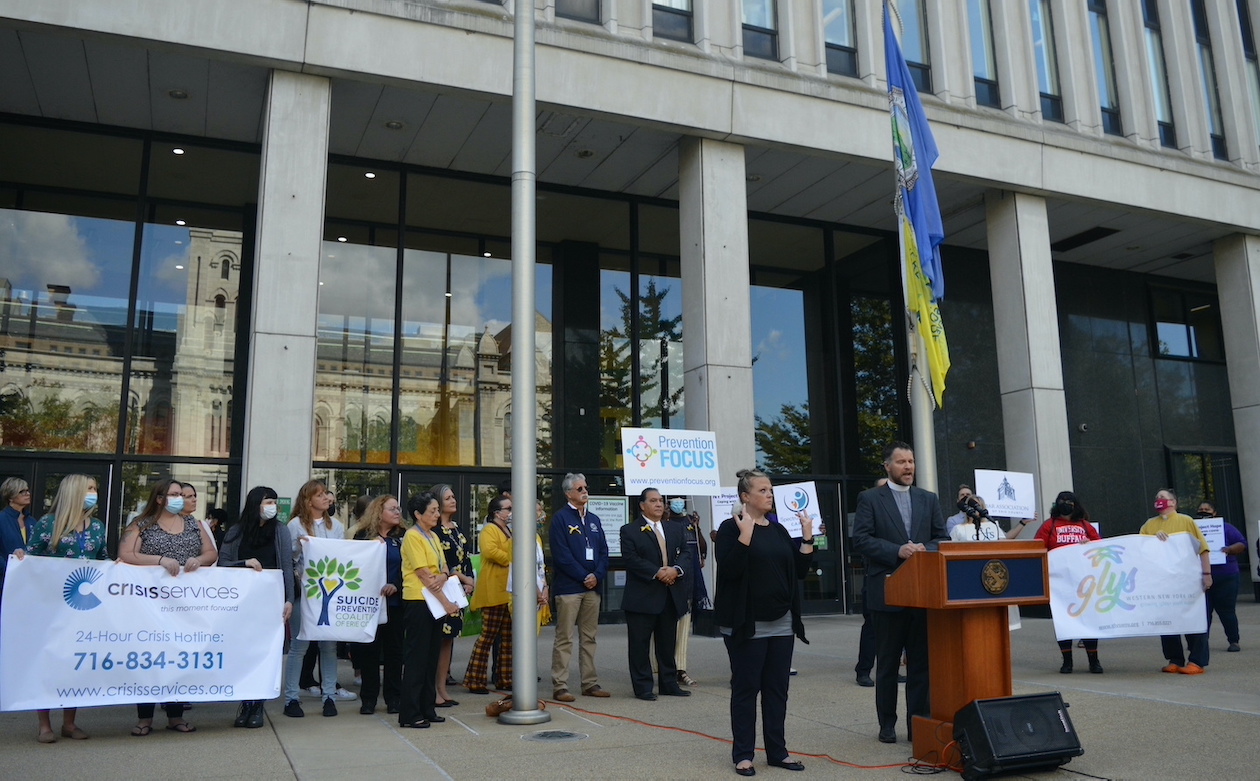 Rev. Roger Griffiths of Zion Lutheran Church (at podium) sings "You Raise Me Up" as a yellow Flag of Hope is raised at the Edward A. Rath county office building in downtown Buffalo.

Erie County Executive Mark Poloncarz was joined Friday by Commissioner of Health Dr. Gale Burstein and Commissioner of Mental Health Mark O’Brien; Erie County legislators; Chief Executive Officer of Crisis Services Jessica Pirro; Celia Spacone, Ph.D., of the Suicide Prevention Coalition; member agencies and concerned citizens in front of the Edward A. Rath county office building to spread a message of hope and proclaim “Suicide Prevention Week” in Erie County. The group raised a yellow “Flag of Hope” on the Rath building flagpole to raise awareness of the issue and as a symbol of hope against this public health crisis. Yellow is the color chosen to highlight the issue of suicide prevention.

“Thankfully the number of suicides in Erie County is declining, however, the effects of suicide are far-reaching and impact families, relatives and friends for years to come. This is why it is so important to raise awareness and let people know that help is available, whatever issues they are facing,” Poloncarz said. “I thank our community partners for joining us in raising our voices of concern and compassion for people who may be struggling, and I urge anyone who is having self-destructive thoughts to please reach out for help. We are here for you.”

“The loss that our community experiences when someone dies by suicide is tragic, painful and preventable,” Burstein said. “Events like this Flag of Hope ceremony shine a spotlight on what can be done to prevent suicide. But every day, we have a responsibility to support initiatives that eliminate stigma, and to incorporate compassion and empathy in how we talk about suicide.”

O’Brien added, “Suicide across all age groups has been ticking up consistently year over year, with the notable exception in Erie County last year. As noted by others, groups that are often seen as marginalized have higher rates of attempts or completions than their mainstream peers. The one exception to that is with middle-aged and older adult males, who have had among the highest rates of completed suicides for years. Three essential elements to mental wellness that correspond to much lower rates of suicide are purpose, hope and connection to others. It is vital that we look past the stigma of mental illness to help those in need reach out to restore those three elements in their lives.”

A press release stated, “Younger groups have had consistently lower suicide rates than middle-aged and older adults; however, the prevalence of suicidal thoughts, planning and attempts is significantly higher among young adults aged 18-29 years. Youth identifying themselves as lesbian, gay, bisexual, transgender or questioning are four times more likely than their straight peers to commit suicide. Rates of Black and Latinx youth suicide are also rising.

“Crisis Services is Buffalo and Erie County’s only accredited organization for suicide prevention, intervention and postvention work. Our crisis first responders work to ensure anyone in crisis finds safety, help and hope,” Pirro said. “We honor the start of Suicide Prevention Month today to ensure our community knows they are never alone. We are committed to be there 24 hours a day to help provide hope in a moment of despair. The message today of raising hope is to help save lives and show we are a community committed to ending suicide.”

Spacone said, “The work of the Erie County Suicide Prevention Coalition supports the community in tackling the devastation of suicide. This year was particularly challenging, but coalition members never quit. They used precautions and went to a virtual format to continue to build a suicide-safer community with education, training, support and stigma reduction. Our goal is to make suicide a never event.”

The press release noted, “The coalition is focusing its work on reducing access for people in crisis to the most lethal means for suicide, a proven method to reduce the rate of death by suicide.”