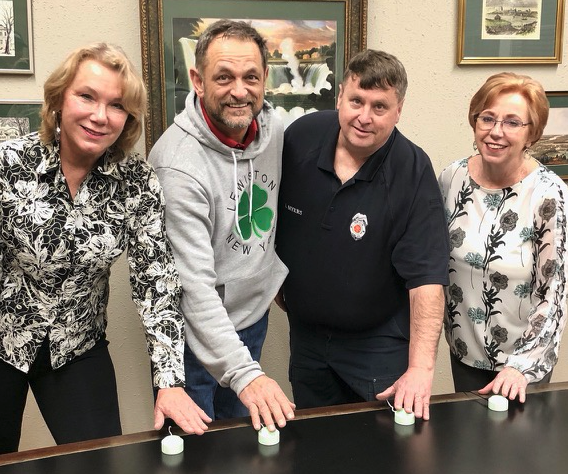 "Jeopardy" teams ready for Lewiston's battle of wits. The team captains practice their buzzer skills in preparation of this year's tournament on Saturday, Sept. 18, at the Brickyard Brewing Company banquet room. The teams will be competing in the annual contest that raises funds for the Lewiston Museum. Portions of the tournament are open to public participation and prizes. Tickets are $35 each and include beer and pizza. They can be obtained by calling the museum at 716-754-4214. From left: Sandy Blackwell Yates, last year's champion; sponsor Curt Stuart of Stuart Sports; Les Myers, representing sponsor Lewiston Fire Co. No. 1; and sponsor and team captain Mayor Anne Welch.

Game on: 'Jeopardy Beer and Pizza Night' slated for Sept. 18

It’s been a long 18 months, but “Lewiston Jeopardy” will be resurrected at the newly restored Brickyard Brewing Company at 6:30 p.m. Saturday, Sept. 18.

The world stopped shortly before our originally scheduled event planned in March last year. We’ve been waiting ever since. Thankfully, the Brickyard has done an amazing job since the fire, and we are looking forward to being one of the first events at their brand-new banquet room on the second floor.

“Lewiston Jeopardy” is the annual epic battle of wits when our community's most knowledgeable, experienced and competitive citizens square off to claim the coveted title of this year’s “Jeopardy” champions. The clues are about Lewiston and Western New York and the general audience gets to participate as well to compete for a number of cash and merchandise prizes.

The event is a fundraiser for the Historical Association.

"It’s a contest of intellect and speed that showcases local residents competing for prizes and bragging rights," said Ken Slaugenhoupt, president of the Historical Association and Museum.

While the four teams should be sharpening their skills for the big showdown, early reports indicate they are taking a more casual approach.

The contestants come from diverse backgrounds and bring over 700 years of combined Lewiston experience to the event. All are recognized for their love of Lewiston and their in-depth knowledge about the area's past and present. They have been involved in numerous civic endeavors and have proven their "street cred" in working to make Lewiston one of the best small towns in America.

The actual contest is modeled after the “Jeopardy” show on television, and clues will be about Lewiston and Western New York, including history, local culture, and general regional knowledge.

Sandy, the team captain, said, "Last year we were the dark horse team, but we prevailed. Obviously, we have a target on our back this year, but we’ll do our best to earn the champion trophy again. Get those buzzers ready!"

Vying for the top spot will be Mayor Anne Welch’s team. She will be joined by her colleague, Deputy Mayor Victor Eydt, and village historian Russ Piper. Welch said, “We don’t plan on any study sessions, but I’m confident Lady Luck will smile upon us. It will be another great evening of friendly competition. We encourage everyone to come out and enjoy the fun.”

Long-time businessman Curt Stuart, of Stuart Sports on Center Street, will be sponsoring a team being led by lifelong resident and former Village Clerk Amy Salada and joined by the dynamic husband and wife duo, Bill and Rita Geiben.

Bill is a retired Lew-Port teacher and long-time elected official. Rita is an historical tour guide. Amy explained, "When the other teams are sweating it out, we will calmly take control and show everyone what the power of positive thinking can do. May the most enthusiastic team win!"

Finally, Lewiston No. 1 Fire Co. is a new entry this year and team captain Peter Coppins will be joined by Bill McEvoy and Trustee Dan Gibson.

Peter said, "No, we aren’t prepared. But the other teams will find out soon enough that when it comes to beer and pizza, no one can touch us."

But knowledge is only part of the game. It’s also about which teams can hit their buzzers first. There will even be a final “Jeopardy” question where teams can bet it all! So, strategy is also a big part of who will take home the championship trophy.

“The last ‘Jeopardy’ night exceeded everyone’s expectations and this year promises to be bigger and better. It will be a spirited contest and we’re looking forward to great evening of laughs, surprises, some old-fashioned friendly rivalry and learning more about our hometown," said Slaugenhoupt, volunteer president of the Historical Association. “You can raise your hand to participate or just sit back and enjoy the show."

The "fun"draising event is open to the public and will be held in the upstairs banquet room at the BBC, which is equipped with an elevator. Reservations to the event can be purchased for a $35 donation per person. Please call 716-754-4214 and charge your donation over the phone. Or you can send a check payable to the Historical Association of Lewiston Inc. and mail it with your name(s), address, phone and email to: HAL, PO Box 43, Lewiston, NY 14092. Beer and pizza are included. Make your reservations soon, because this will be a sell-out.

All paid reservations from last year will be honored.

Additional sponsorships are welcomed. If you are interested in attending the event or participating as a sponsor, please call the Lewiston Museum at 716-754-4214.