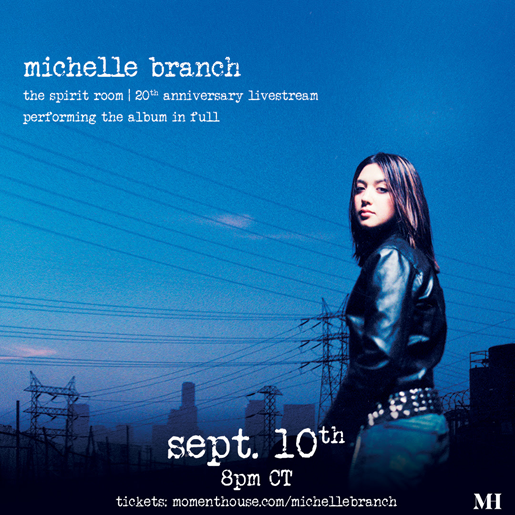 A special performance of her acclaimed debut album, presented by Moment House, on Sept. 10

√ New 20th anniversary edition of ‘You Get Me’ out today; listen HERE

Michelle Branch has announced “The Spirit Room – 20th Anniversary Livestream,” a one-night-only performance in celebration of the 20th anniversary of her acclaimed debut album “The Spirit Room.” Presented by digital live platform Moment House on Sept. 10 (9 p.m. ET), the event will see the multi-Platinum artist perform the record in its entirety in an intimate solo acoustic setting. Fans will have the ability to purchase limited-edition merchandise, virtual meet-and-greets and an exclusive Q&A session with Branch on the night of the livestream, making for a truly interactive experience.

Branch originally released “The Spirit Room” in August 2001. It sold 2 million copies in the U.S. The seminal album featured the infectious and heartfelt hits “Everywhere” and “All You Wanted,” and ushered in a new era of young women writing and performing their own songs.

Branch was 17 when she released her highly acclaimed debut album. She followed it up with 2003’s “Hotel Paper,” which debuted at No. 2 on the Billboard album chart and became Branch’s second Platinum-selling disc in the U.S. It spawned the hit single “Are You Happy Now?” which was nominated for a Grammy Award for “Best Female Rock Performance.” Branch also won a Grammy for singing on Carlos Santana’s “The Game of Love,” which reached No. 5 on Billboard’s Hot 100 and spent many weeks atop the Billboard Adult Contemporary chart.

In 2006, Branch found success with modern-country duo The Wreckers, whose debut, “Stand Still, Look Pretty,” was praised by critics for breaking down barriers between pop and country. The Gold-certified album spawned the hit single “Leave the Pieces,” which topped the Hot Country Songs chart for several weeks, as well as “My Oh My” and “Tennessee,” and earned Branch her fourth Grammy nomination. (She was also nominated for Best New Artist in 2003.)

Moment House, founded in 2019 out of the Jimmy Iovine & Dr. Dre Academy for Innovation at USC, has hosted "Moments'' by a range of artists including St. Vincent, Tame Impala, Halsey, Kygo, Kaytranada, Brockhampton, MARINA, Charlotte Lawrence, Ruel, Yungblud, Grouplove, Bryson Tiller, KSI, the “My Brother, My Brother and Me” podcast, Omar Apollo and more. It also hosted the livestream for both nights of Clive Davis’ Grammy gala this year. Coming up, Moment House will continue presenting moments with some of the most top names in entertainment, including Halsey, Isaiah Rashad and Tinashe. For more information on Moment House, visit momenthouse.com.