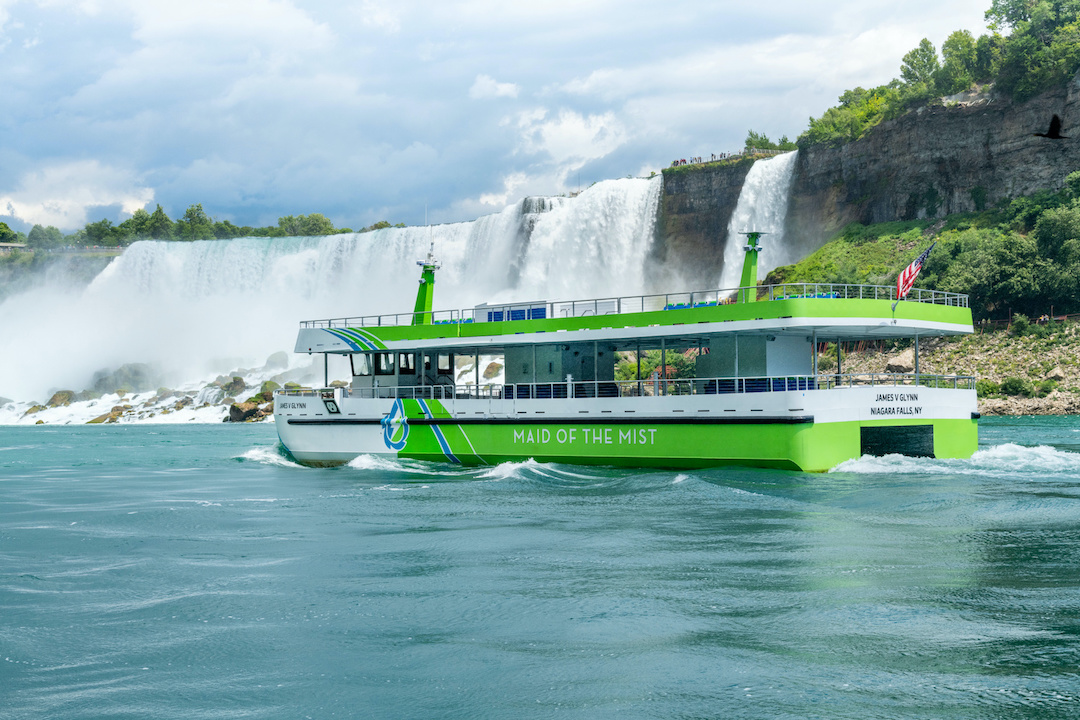 (Image courtesy of Maid of the Mist)

Maid of the Mist honored with international electric boat award

Maid is one of eight boats from eight countries to win

Niagara Falls-based boat tour company the Maid of the Mist Corp. is again the recipient of a prestigious award.

It reported this week that, following a tallying of votes from more than 10,000 electric boat enthusiasts worldwide and an international judging panel of e-boat experts, its all-new all-electric, zero-emission vessel has been recognized with the 2021 Gustave Trouvé Award.

The honor was presented at the second annual Gustave Trouvé Awards for Excellence in Electric Boats and Boating – also known as “The Gussies” – held in Toronto.

Maid of the Mist was honored in the Electric Boats Designed for Paying Passengers, In Operation category. Its new offerings were placed into service in October 2020.

“This international award is a testament to our associates and the expert companies we worked with to develop these unique vessels,” Maid of the Mist President Christopher M. Glynn said. “Our two electrics, the James V. Glynn and Nikola Tesla, are receiving rave reviews from both the maritime industry and our guests, and we are grateful to have received this honor.”

“The Gussies” awards, now in its second year, were created by electric boat website Plugboats.com to recognize the inventors, designers, manufacturers, entrepreneurs and visionaries who are making advances every day to develop clean, quiet, zero-emission technologies and designs to reduce reliance on fossil fuel for marine propulsion.

More than 100 boats were nominated in 2021, more than twice as many as in 2020, with the finalists and eventual winners chosen through a combination of public voting and weighted ballots by a panel of industry experts from the Electric Boat Association in the United States, Great Britain, Greece, Switzerland and Canada.

“The number of entries and the response from the public shows just how quickly electric boats are growing,” said Jeff Butler, editor/publisher of Plugboats and founder of the awards. “Whether it’s a family day boat, an ocean cruiser, river tour boat or the Maid of the Mist at Niagara Falls, electric boats can do it all without the noise, fumes and carbon emissions of fossil fuels.”

“The Gussies” are the only international boating awards that focus exclusively on electric boats. The name honors Gustave Trouvé, a prolific French inventor with over 75 patents to his name. Among his innovations was the world’s first outboard boat motor, which he devised so that he could detach the motor from his prototype electric boat “Le Teléphone” and take it home to work on in his Paris apartment.

While M. Trouvé’s invention predates the 1887 patent of the internal combustion engine, and electric boats have been available since the first years of the 20th century, it was not until recently the boats have begun to enter the mainstream.