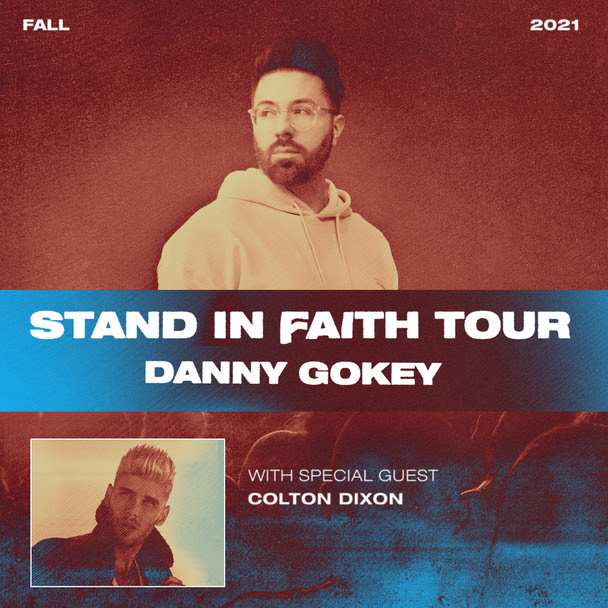 Three-time Grammy-Award nominee and “American Idol” alum Danny Gokey announced a headlining "Stand In Faith" Tour featuring special guest Colton Dixon. Gokey will take his energetic and multigenre live show on the road for an 11-city tour that will kick off Sept. 30. The "Stand In Faith" tour is produced by Transparent Productions. Tickets are on sale HERE.

The tour visits The Chapel in Getzville on Oct. 21.

"I'm really looking forward to this upcoming tour, because I have new music to share from my album releasing in August," Gokey said. "Touring provides a unique opportunity to experience the songs along with the listener and also to be able to connect with people in a way that can only happen in person. I love playing with a live band and these songs have a wider range of musical genres than some of my projects in the past. Anyone who has been to my shows before knows I like to mix it up and have fun while also worshiping and bringing a message of hope. On this tour, we'll be bringing all of that as well! I'm also really excited to have my friend Colton Dixon joining me! He's an incredible talent and I've wanted to tour with him for a while now.

Dixon said, "So pumped to be out with a friend and fellow ‘American Idol’ alum, Danny Gokey. It’s going to be an amazing tour filled with great music and an even greater purpose.”

Gokey's new full-length studio album, “Jesus People” (Capitol Christian Music Group), releases Aug. 20 and includes the current radio single, "Stand In Faith," along with the recently released songs "He Believes In You" and "Agradecido." Throughout the project, Gokey's songs touch on love, gratitude and truth. The official music video for "Stand In Faith" premiered on YouTube. Click here to watch the new video.

Gokey said, "When I start writing for a new project, I always pray and ask God to help me to say what it is he'd say to the listener as I write. It never fails that I end up writing songs that challenge the listener to step into a new place of faith or allow God to be a comfort/encouragement to them in the place they are standing that might be difficult right now. I hope that this ‘Stand In Faith’ Tour becomes a place to strengthen people's resolve to keep pressing into all that God has for them.”

A three-time Grammy nominee, three-time KLOVE Male Vocalist of the Year and Dove Award winner, Gokey became a favorite of millions of fans as a Top 3 finalist on season eight of “American Idol.” Following that, he released his debut album, “My Best Days,” which debuted at No. 4 on the Billboard Top 200. Since that time, he has celebrated a series of No. 1s, including his follow-up albums, “Hope In Front of Me,” “Rise,” “Haven’t Seen It Yet,” and his award-winning holiday album, “Christmas Is Here.” Spawning singles “Hope In Front of Me”, “Tell Your Heart to Beat Again” (RIAA Gold-certified), “Rise,” “The Comeback” and “Haven’t Seen It Yet” (RIAA Gold-certified), Gokey has cemented his place on the radio charts with multiweek, multicharting No. 1 runs both in the U.S., Canada, and now in Latin America with the releases of his Spanish singles. Find out more at www.DannyGokey.com.

Dixon quickly became a household name in 2012 when he was voted a fan favorite and made it to the Top 7 on season 11 of “American Idol.” His career has been on the fast track ever since, now boasting over 100 million streams across all platforms. Dixon's 2013 debut, “A Messenger,” set the record for biggest first-week sales by a new solo Christian act, becoming the No. 1 selling album by a new Christian artist. Dixon is also a Steinway & Sons artist, following in the footsteps of legendary artists such as Harry Connick, Jr. and Billy Joel.

Dixon's sophomore effort, “Anchor,” included the most played Hot AC single of 2014, “More Of You," which spent three weeks at No. 1, as well as "Through All of It," his fourth consecutive No. 1 at Hot AC Radio. In 2013, Dixon won a Dove Award for Best Rock/Contemporary Album Of The Year, along with two additional nominations. In 2015, “Anchor” was honored with the Dove Award for Rock/Contemporary Album of the Year. Dixon received back-to-back K-LOVE Fan Award nominations for Male Artist of the Year in 2014 and 2015, followed by the release of his third studio album “Identity,” which included the Top 5 single “All That Matters,” whose video was premiered by PEOPLE magazine. His latest, critically acclaimed, self-titled EP, boasting this hit track "Miracles," is available now, as is his latest single, “Made to Fly.”