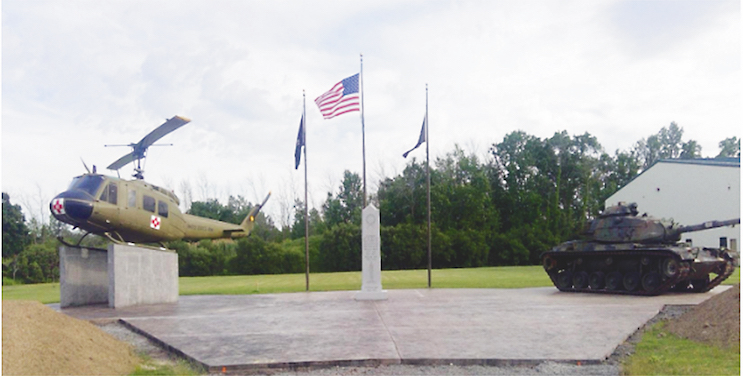 √ 2020 finalist of “The Voice,” Cami Clune, performing the National Anthem

“It’s my belief that the Town of Wheatfield has always supported and cared for veterans as much as possible,” said Tom Kontak, who leads Wheatfield Veterans Memorial Inc. “The project certainly is not completed, not 100%, but it is sufficient to represent how we feel about the veterans and their services.”

While the Wheatfield Veterans Memorial project had been a concept that was discussed in the town for years, it only recently came to fruition. Kontak, who has helped coordinate the memorial effort since 2018, and had assisted with the restoration of the memorial’s most striking accouterments – a Vietnam-era UH1-D Huey helicopter and a Cold War-era M-60A3 army tank that were moved from the Highway Department building to Town Hall over the past year – said he’s excited to see these artifacts used to properly honor local heroes.

“It was a natural progression to use the things that Wheatfield had – the monument, the tank, the helicopter,” he said. “For them to sit and not be the centerpiece for anything, you're not putting your ducks where they should be. You're not showing the respect that is due to the veterans. We have veterans from the Civil War, World War I, World War II, Korea, Vietnam, as well as the most recent conflicts in the (Middle East). So, it was important to remember those sacrifices, because you're not just talking about a few people. It is a large number of American citizens, men and women, who have contributed to keeping the country free. And as we all have heard many times, freedom is not free. And it's because we remember that we do this kind of thing; you have to continue remembering those sacrifices.”