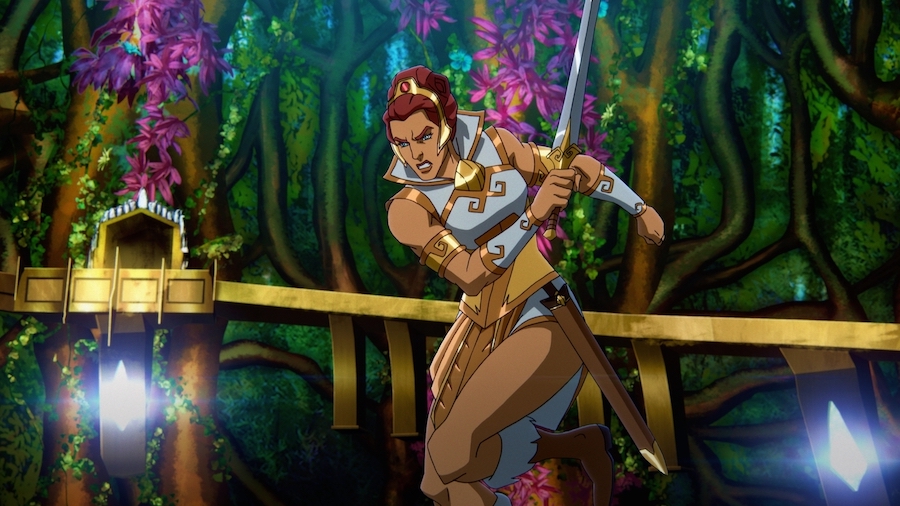 Given her list of credits, it’s no surprise to see – or in this case hear – Sarah Michelle Gellar playing the female heroine in the new animated series “Masters of the Universe: Revelation” from Netflix and Mattel Television. A sequel to the 1980s cult classic series, the series picks up where the iconic characters left off decades ago. After a cataclysmic battle between He-Man (Chris Wood) and Skeletor (Mark Hamill), Eternia is fractured and the Guardians of Grayskull are scattered. And after decades of secrets tore them apart, it’s up to Teela (Gellar) to reunite the broken band of heroes, and solve the mystery of the missing Sword of Power in a race against time to restore Eternia and prevent the end of the universe.

Ahead of the series’ debut, Gellar discussed why Teela’s story resonated with her, working with showrunner and executive producer Kevin Smith and watching the show with her kids.

How did you first become familiar with the “Masters of the Universe” franchise?

I was definitely aware of the franchise and the TV show growing up. When you hear, "By the power of Grayskull!" it feels like hearing a song from when you were a child that you haven't heard in years, but the second you hear it, you remember all of it. I did a little bit of research before I started working on “Revelation,” remembering how all the characters are interwoven, but what's beautiful about “Masters of the Universe” is that it's a classic story. It's about having the power to choose good, and good triumphing over evil. It’s about people making mistakes and learning from them. Those themes translate over time.

What about Teela and her story in “Revelation” really resonated with you?

Anyone who knows me knows that I have a fondness for the chosen one; the girl who doesn't know that she has any power and then finds out that she has all the power. And to me, that's the most important life lesson to learn and to teach as a female, and something that I really try to impart to my daughter; that you can do anything anybody else can do. It's about putting your mind to something and believing in yourself. Teela discovering her power and her truth and really finding her own place is such an important story.

You’re famous for playing and voicing strong women – Buffy Summers on “Buffy the Vampire Slayer” and the Seventh Sister on “Star Wars: Rebels,” to name just a couple. Is that something you actively look for when you’re taking on a role, or has it just become a natural trend throughout your career?

It’s a little bit of both. I think that’s the reason behind my initial attraction to She-Ra in the original “Masters of the Universe” – I didn’t have strong female characters to look up to when I was growing up. So I've been fortunate to get to play them and bring them to life, and to make sure that little girls growing up today have lots of options and avenues into understanding that women are powerful. Storytelling is about making an impact and playing characters who people remember and who leave an impression. Those are always the best characters to play.

What was your experience working with Kevin Smith like?

Kevin emailed me about this show, and I’m a huge Kevin Smith fan – I love “Clerks,” “Mallrats,” he’s the coolest – but I’d never gotten to work with him before. I read the first couple of scripts for “Revelation,” and I thought, "This is really good.” I recorded almost all of my work from home because of COVID-19, and I set up a little studio in my husband’s office. We did a lot over Zoom, but Kevin was still so connected to the work and he made it such a special experience. That’s not easy to do.

Are you going to watch “Revelation” with your family?

Oh, I can't wait to watch it with them. They're so excited. I'm just happy they finally have things that I'm in that they can actually see.

“Masters of the Universe: Revelations” debuts July 23 on Netflix.