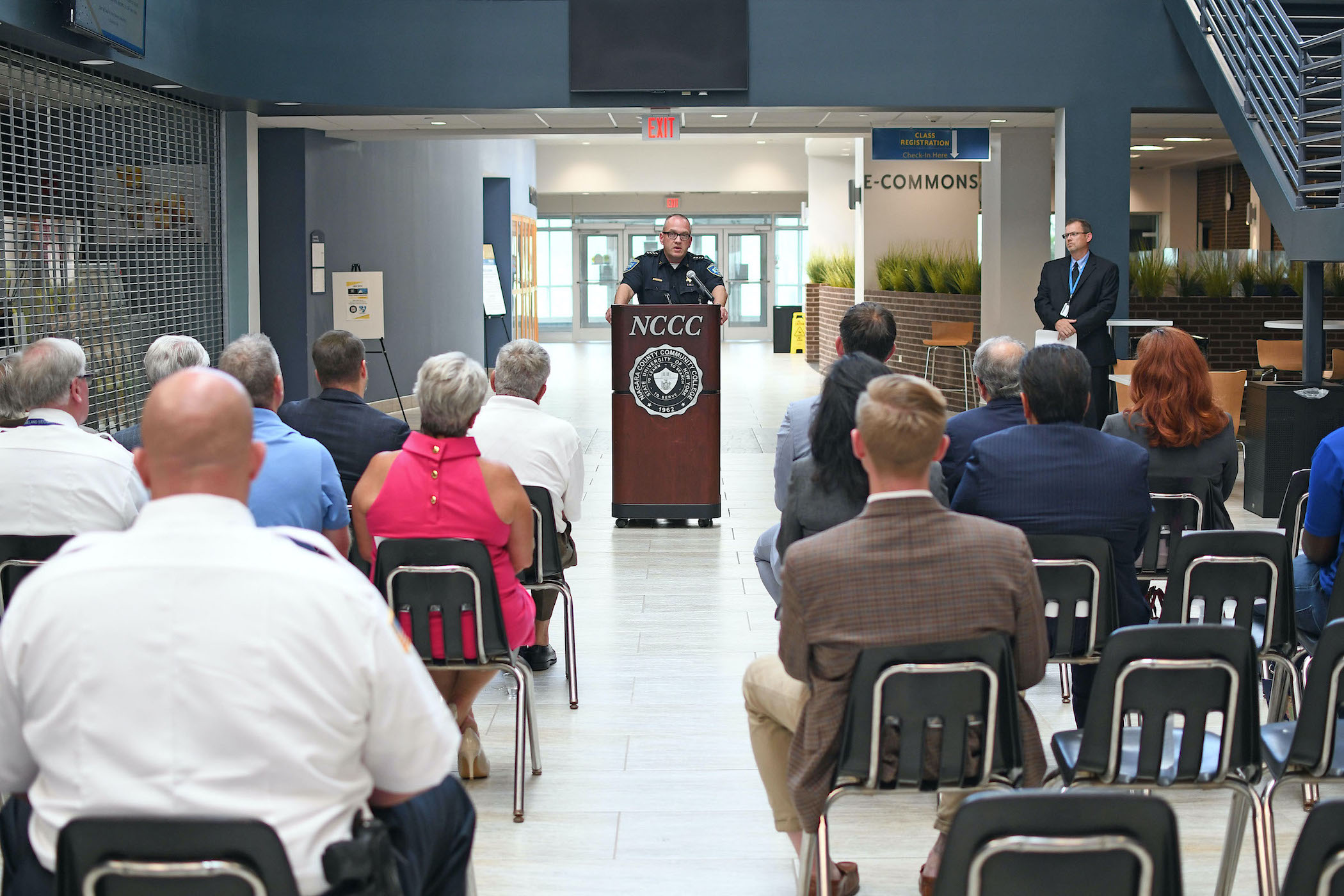 Niagara County Sheriff Michael J. Filicetti speaks at a press conference about the move of the Law Enforcement Academy back to the NCCC campus.

On Tuesday, a press conference was held to celebrate the return of the Niagara County Law Enforcement Academy to the Sanborn campus of Niagara County Community College. NCLEA will relocate to NCCC in August after a decade at Niagara University. Several elected officials joined college leaders to pledge their support of local law enforcement and the academy's move.

NCLEA, jointly operated by the Niagara County Sheriff's Office and the Niagara Falls Police Department, was previously located at NCCC from 1974 to 2011. The academy trains newly hired officers or those hoping to be hired by police agencies throughout Western New York.

NCCC President William J. Murabito said he is anticipating a collaborative program between the college and the academy to offer criminal justice students an opportunity to combine their college degrees with academy training.

"As I see it, we can integrate the academy experience, which is one semester, with a three-semester program outside the academy; so, the student can come here, attend the academy, graduate from the academy, and leave here after two years with an associate’s degree,” he said. “I believe, with the addition of the academy and their personnel on our campus, the NCCC criminal justice program will not only be one of the strongest in the region but also in the state."

Niagara County Sheriff Michael Filicetti praised the cooperation between all the entities involved and said the academy plans to move into the new space at NCCC in early August so the next class can begin in September. Filicetti also mentioned NCLEA was pursuing funding from New York State Sen. Robert Ortt and the Niagara County Legislature for a new training facility built on the NCCC campus in the future.

"This facility would allow training for our officers to a whole new level in the county," Filicetti said.

Ortt joined other local elected officials in praising the collaboration of the educational institutions with law enforcement leaders.

"It is very important to be part of the solution; you are either part of the solution or part of the problem," he said. "It is important to let our future generations of students know that somebody needs to be the next police officer in Niagara Falls, in Lewiston, in North Tonawanda, in Niagara County. And that we are sending a clear message, that it is an honorable profession, a noble profession, and that we in the community support those families who send their sons and daughters, husbands and wives, and brothers and sisters to become law enforcement officers."