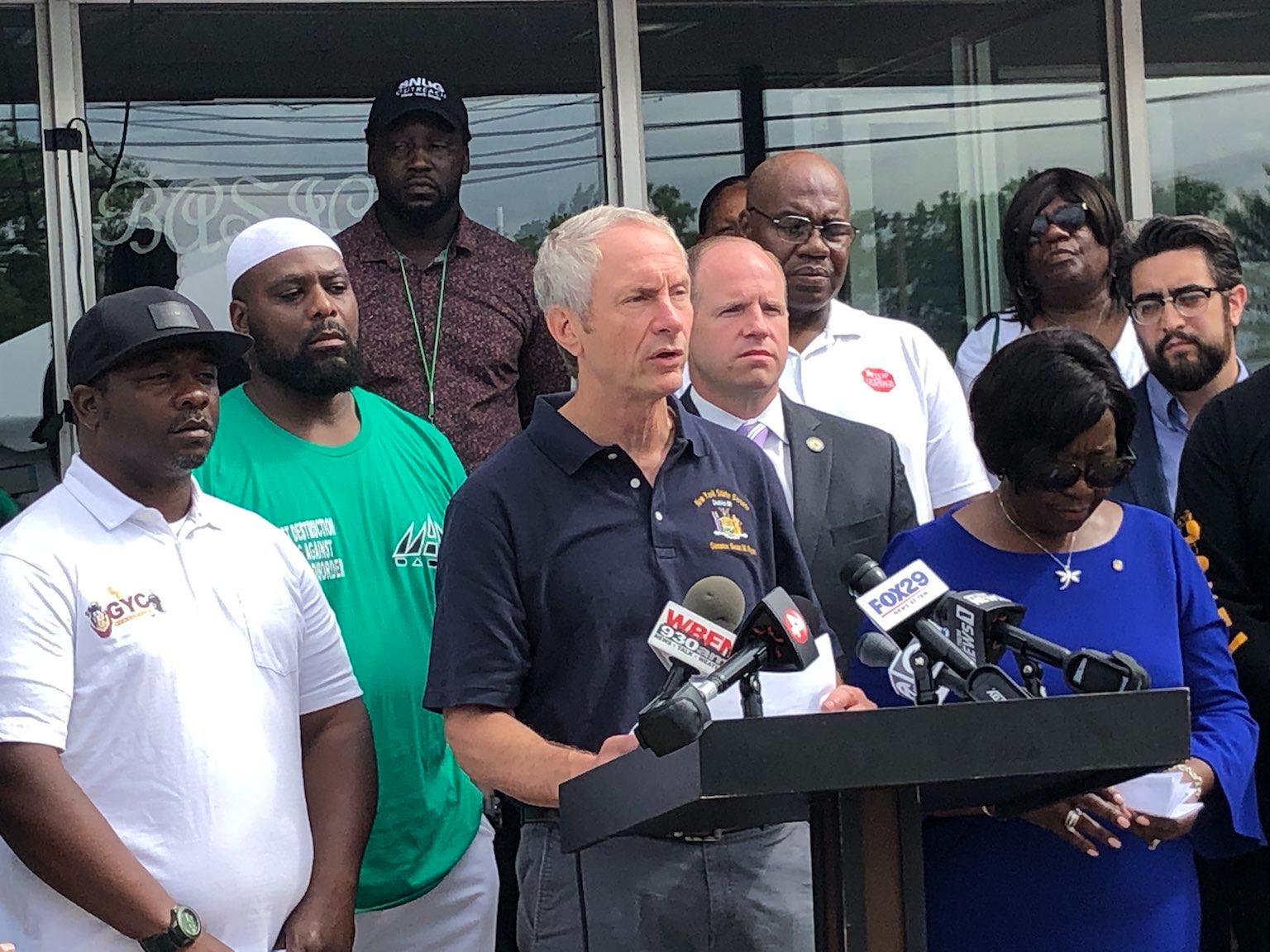 On Tuesday, New York State Sen. Tim Kennedy, New York State Assembly Majority Leader Crystal Peoples-Stokes, Sen. Sean Ryan and Assembly member Jon Rivera gathered to announce $65,000 in state funding for the Stop The Violence Coalition, and $154,000 for the Buffalo Peacemakers to address the rise of gun violence in the City of Buffalo.

Stop The Violence (STVC) is a collaboration of community-based organizations formed in 2004 in response to the high number of homicides in the City of Buffalo. its mission is to stop the violence plaguing neighborhoods and to take the initiative to make the city a safer place to live.

A press release stated, “The coalition’s work occurs on the street – intervening where conflicts arise. They are in the courts, assisting youth who have found themselves on the wrong side of the law. They are in the schools and community centers, providing important mentoring and counseling services.”

The Buffalo Peacemakers violence and gang intervention program is a group of volunteers and part-time staff members who formed in 2007 to provide proactive intervention into the cycle of violence in the lives of gang-involved or at-risk youth in Buffalo.

Again, the press release said, “Members of the staff integrate themselves into local neighborhoods in order to effectively mediate conflicts in the community. Their efforts include a ‘Safe Passage’ program that stations members at strategic locations throughout the city after school hours to discourage violence and help students get home safely.”

The $219,000 in funding secured by the state legislators will support the organizations by helping them expand to additional Buffalo neighborhoods and increasing their outreach efforts to address the root causes of violence in the community.

Kennedy said, “Deaths caused by gun violence have risen by 200% over the past 15 months locally. Prayers, while welcome and appreciated, are not enough. We need real change, and that often happens in the community at a grassroots level with organizations like the Buffalo Peacemakers and the Stop the Violence Coalition. This funding, alongside real policy reform to limit gun accessibility and hold manufacturers accountable here in New York state, are monumental steps in the right direction in addressing what has become a public health crisis.”

Peoples-Stokes said, “For more than a decade, the Buffalo Peacemakers have made it their mission to end violence in the City of Buffalo through proactive community intervention programs. The Buffalo Peacemakers’ tenacity to serve the community does not go unnoticed and are a praiseworthy example of what it means to be a city of good neighbors. The $219,000 in funding secured by the WNY state delegation is an indication of our support and seriousness towards eradicating gun violence and expanding this organization’s reach and impact into other Buffalo neighborhoods.”

Ryan said, “The Buffalo Peacemakers have been committed to bettering the City of Buffalo and protecting its residents for more than a decade. They are out in the community every day, taking a holistic approach to combating violence in Buffalo. This funding will help them expand their efforts and bring their intervention skills to more neighborhoods throughout the city.”

Rivera said, “Too many innocent lives have been lost to gun violence on our streets, and organizations like Buffalo Peacemakers and the Stop the Violence Coalition have been situated on the front lines of the fight against this sort of needless hostility. As someone who personally lost a lifelong friend to gun violence recently, it is impossible to see victims as mere statistics or to ignore the human element behind the numbers. This crucial funding for these organizations will help these resilient volunteers to address the gratuitous aggressions at a grassroots level, and will make our communities safer though mediation strategies.”

Pastor James Giles, founder of Buffalo Peacemakers, said, “To successfully address the violence in our community, it will require all of us. We need a collective impact; every aspect of the community working together to wrap our arms around this ‘gundemic’ to stop it. Now is the time.”