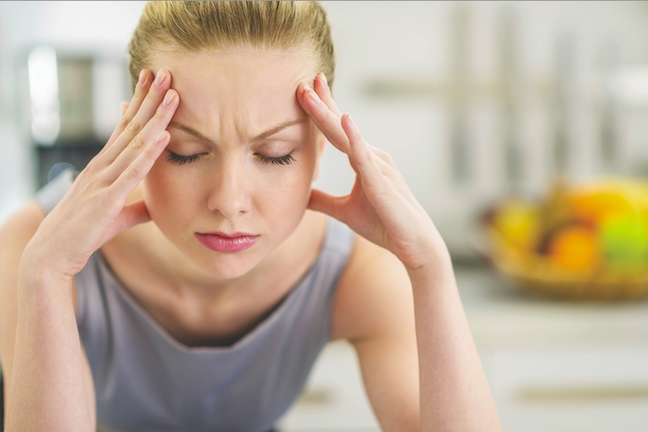 New treatments could transform the way migraine headaches are treated

UB neurologist, who co-authored editorial in JAMA on migraine treatments, said a new approach ‘totally upends our prior conceptions’

An estimated 1 billion people worldwide suffer from migraine headaches, which can cause nausea, severe pain and sensitivity to light and sound. But despite the high incidence of the disorder, patients who have frequent headache and who typically take two medications – one for prevention and one for acute onset – often have to try several different medications before finding something that is effective.

That difficulty, and new treatments that have the potential to address both acute and preventive therapy of migraine, were the subject of an editorial published last month in the Journal of the American Medical Association by Melissa Rayhill, M.D., clinical assistant professor of neurology and adult neurology residency program director in the Jacobs School of Medicine and Biomedical Sciences at the University at Buffalo; and Rebecca Burch, M.D., assistant professor of neurology at Brigham and Women’s Hospital and Harvard Medical School.

“The last few years have been revolutionary for headache medicine with the number of treatment advancements,” said Rayhill, who treats patients at UBMD Neurology. “Nevertheless, there are still far too many patients out there that still haven't found a treatment that works for them, despite the growing number of therapeutic options.”

She said many patients are not offered effective, migraine-specific therapy, even though there are many available: “In addition, many patients never even seek out care at all because of misconceptions about why they may have headache in the first place.”

But things are rapidly changing in the treatment of migraine.

“There are so many good, migraine-specific acute treatment options now,” Rayhill said. “For some patients, the quest to find something that works can take months or longer. Many will find a safe and effective acute treatment for their migraine headaches after just one visit to their physician’s office, though typically it may take a couple of medication trials over a few weeks to find a good fit.”

While the traditional approach to chronic migraine treatment has been to prescribe two medications, one that acts as a prophylactic and another that acts on acute episodes, that approach is changing.

“In our editorial, we highlighted some recent studies that show some new treatments are blurring the lines between acute and preventive migraine treatment,” Rayhill explained.

In their editorial, Rayhill and Burch discussed a recent study on eptinezumab, which was published in the same issue.

“Eptinezumab is an intravenous therapy approved for preventive treatment that is given in an infusion center or delivered at home by a visiting nurse,” Rayhill explained. “The study suggests it may be helpful for acute therapy as well, though logistical and cost considerations may preclude utilizing this approach in practice more routinely now.”

She added that the other subcutaneously delivered medications in the same class (monoclonal antibodies targeted against calcitonin gene-related peptide, CGRP, a migraine signaling molecule) have not been explicitly studied for acute therapy in large trials, and that in clinical practice these other medications have usually taken weeks to months to see an effect in most patients.

Another treatment that she said may be blurring the lines between acute and preventive therapy for migraine is rimegepant, a small molecule, direct CGRP antagonist.

“Rimegepant was recently approved by the Food and Drug Administration for the preventive treatment of migraine after initially being approved for acute migraine treatment in early 2020,” Rayhill said. She added that most acute therapies for migraine are judged by whether they relieve pain and associated symptoms within two hours of taking the medication. In a recent study, rimegepant was also effective in reducing headache frequency (preventing headache) when dosed every other day.

While finding the right migraine medication usually takes some time, Rayhill noted the outlook for patients is definitely improving: “I have seen some dramatic responses to many of our existing conventional medications for both acute and preventive therapy.”

“The newer CGRP monoclonal antibody therapies (the intravenous therapy, eptinezumab, and the other three subcutaneously delivered medications in the class) and the CGRP small molecule antagonists (the oral medications rimegepant and ubrogepant) have produced similar dramatic responses in my clinical practice,” she continued. “It’s important to note that these responses are very individualized and, sadly, some do not respond to any of the above therapies. However, I think where both classes of CGRP therapies shine is in their improved tolerability – in other words, the decrease in reported side effects in comparison to other conventional therapies.”

Unfortunately, she cautioned, cost remains a huge barrier for many to accessing the CGRP therapies, and insurers are often reluctant to cover them without requiring clinicians and patients to jump through a series of hoops.

“Migraine is a disabling neurological condition that patients inherit, and there is currently no cure,” Rayhill said. “But because of the number of effective treatments now, the future is brighter than ever for patients who suffer with migraine. Amazingly, there are even more migraine therapies in the pipeline.

“Patients with migraine should be able to expect that the clinicians who care for them are familiar with and comfortable using multiple acute treatment options. Help is within reach.”