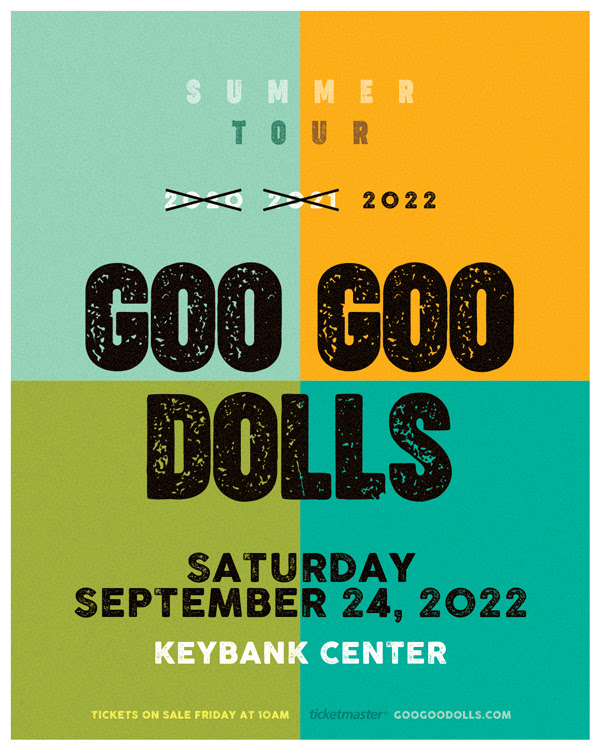 The Goo Goo Dolls are coming home in 2022. (Image courtesy of KeyBank Center)

Tickets are on sale this Friday, July 16, for the show on Saturday, Sept. 24

On Monday, Grammy-nominated, multi-Platinum-selling band Goo Goo Dolls announced a return home to Buffalo for a “momentous concert” at KeyBank Center on Saturday, Sept. 24, 2022. Produced by New Day Live, general on-sale tickets will be available beginning at 10 a.m. Friday, July 16. Ticket options will range from $29.50 to $99.50 and can be purchased via Ticket Master or the band’s website.

Frontman John Rzeznik said, “It’s a dream come true for us to be able to return home and play the premiere venue in Buffalo, a city that’s always meant so much to us. We can’t wait to share such a special night with all of our hometown friends and family."

Bassist AND vocalist Robby Takac added, “It’s going to be great to be able to do a full-scale summer show downtown again. It’s been way too long and it’s definitely time for something special like this again!”

The show will serve as a fitting finale to Goo Goo Dolls’ 2022 North American tour, which will see the band performing at notable outdoor venues throughout next summer.

With their anticipated 13th LP also on the horizon, Goo Goo Dolls recently released their brand-new compilation album “Rarities.” The record is a retrospective collection of 20 songs spanning their career from 1995 to 2007; a prolific period during which the band released several chart-topping hits, ascended to mainstream stardom and cemented its footing as one of the most influential rock bands in recent memory.