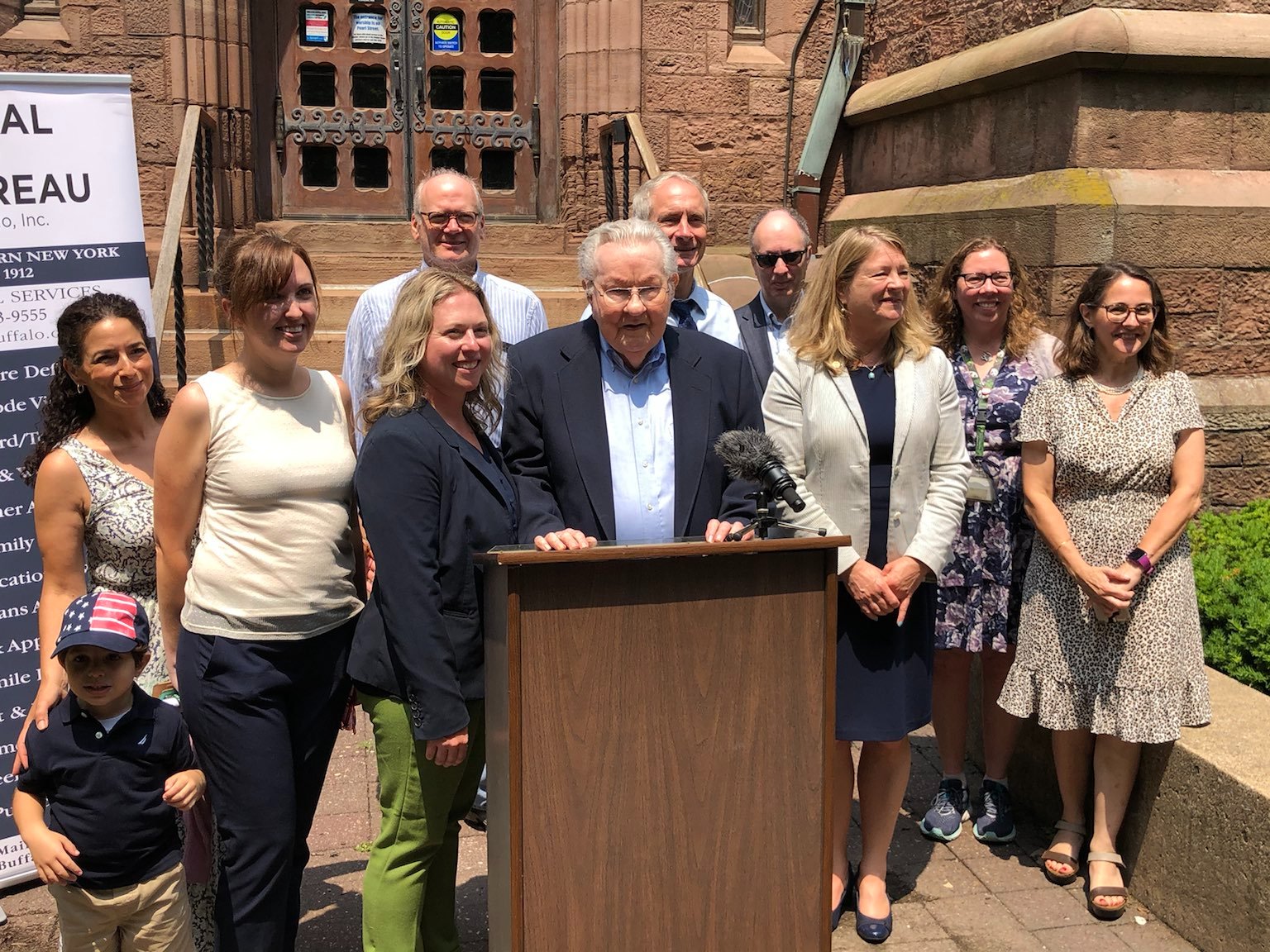 Daniel Barry addresses the crowd on the occasion of his award. (Submitted photo)

On Wednesday, New York State Sen. Sean Ryan and Assembly member Karen McMahon presented Daniel E. Barry Jr. with a resolution passed unanimously by the New York State Legislature, honoring him on the occasion of his retirement from the Legal Aid Bureau of Buffalo Inc. after a career of 58 years.

Barry put himself through law school and graduated from the University at Buffalo School of Law in 1962. He then joined the Legal Aid Bureau of Buffalo and was a founding member of its public defender office, where he spent the entirety of his nearly six-decades-long career. Barry’s professionalism and commitment led him to rise through the ranks, eventually becoming chief of the bureau’s public defender office, a position he held for three decades.

A fierce advocate and champion of equal access to justice, Barry received numerous awards and accolades throughout his career. In 2008 he was awarded the Wilfred R. O’Connor Award by the New York State Defenders Association, and in 2013 he received the Michele Maxian Award for Outstanding Public Defender Practitioner.

Ryan said, “Not many can say they have spent almost six decades defending the rights of those who cannot afford to defend themselves, but Dan Barry carries that distinction. As a founding member of the Legal Aid Bureau’s public defender office, he spent the entirety of an admirable career nobly serving marginalized and disenfranchised populations in Buffalo. Dan has distinguished himself not only through a lifetime of public service in Western New York, but to the nation as well, including a spell as a United States Marine from 1953 to 1956. I want to thank him for all he has done for the people of Western New York during his career, and wish him all the best in a much-deserved retirement.”

McMahon said, “A career of almost six decades is remarkable regardless of one’s field, but 58 years of dedication to the rule of law and representation of the most vulnerable is quite an honorable achievement. Buffalo and the entire Western New York region is exceedingly fortunate to have benefitted from Dan's lifetime of service. I was honored to join him and his family in celebrating his career and thanking him for his commitment to the cause of equal justice for all. He certainly deserves the restful retirement that lies ahead, although his colleagues and the legal community of Buffalo will surely miss such a longtime friend.”

Charles Katz, a veteran staff attorney in the Legal Aid Bureau criminal defense unit who worked with Barry for 34 years, said, “For 58 years, Dan Barry stood as a staunch defender of the rights of the disenfranchised from all walks of life with every type of legal challenge imaginable, and did so with grace, good humor and talent. He loved his work, loved his co-workers, and leaves a legacy of dedicated indigent defense that will never be equaled.”