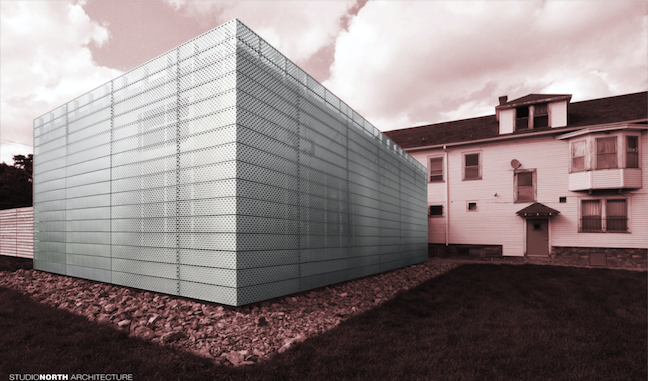 Empire State Development on Thursday announced the completion of Torn Space Theater’s $1.2 million interior and exterior renovation project. The theater, located on Buffalo’s east side, now has an expanded and upgraded performance space that is integrated with reclaimed green space surrounding the newly restored building at 608 Fillmore Ave., creating what ESD called, “a beautiful, walkable campus that invites community engagement.”

Lt. Gov. Kathy Hochul said, “A vibrant arts and cultural industry is crucial to any thriving neighborhood, and the Torn Space Theater is a creative performance space that will inject new life into Buffalo’s east side. Revitalizing the arts is vital to our economic recovery as well as making sure all neighborhoods share in our recovery. The Torn Space Theater has all the makings of an iconic destination and is a prime example of Buffalo’s comeback story.”

ESD Acting Commissioner and President and CEO-designate Eric Gertler said, “This project isn’t just an investment in Torn Space Theater, it’s an investment in the entire surrounding community, creating an enticing environment to attract new visitors to the neighborhood while also showcasing the rich history of Buffalo’s east side. We applaud the theater’s staff and volunteers for completing a project that will be enjoyed and appreciated for years to come.”

Torn Space Theater – in partnership with the Adam Mickiewicz Library and Dramatic Circle – is undertaking a phased initiative to create a campus setting geared for community engagement that complements and supports recent neighborhood revitalization efforts and encourages future investments in Broadway-Fillmore. The expansion and site improvements revitalize not only the theater but also a section of Fillmore Avenue that provides a strategic link to established east side landmarks – such as the Broadway Market, St. Stanislaus Church and Central Terminal – and emerging ones, including urban farms, the renovation of the former Schreiber Brewery, and a Buddhist cultural center. The site is also on a major north/south transit corridor connecting Larkinville with the Broadway/Fillmore commercial district.

The latest phase of the renovation project, titled “Hidden Identities,” designed by architectural firm Studio North, integrates performance space with the outdoor grounds surrounding the newly restored Light/Station design and production studio adjacent to the theater at 612 Fillmore Ave. The project increases capacity and volume of the interior performance space and transforms it into a multiuse, state-of-the-art performance facility while restoring the exterior of the historic Adam Mickiewicz Library and Dramatic Circle. 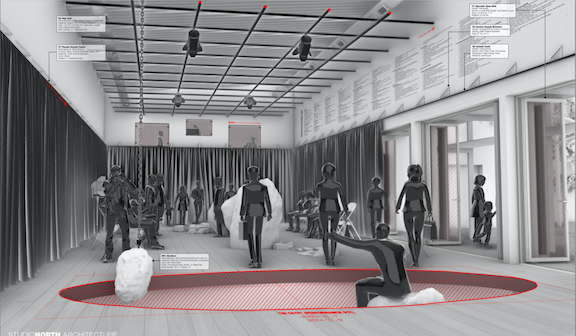 “Torn Space Theater is committed to the long-term viability of the historic Broadway/Fillmore neighborhood,” said Dan Shanahan, Torn Space Theater founder and artistic director. “The completion of this phase of construction ensures that we will be able to produce and present the very best in contemporary performance, host artistic residencies and continue to facilitate meaningful conversations with local and international artists. Torn Space, along with the Adam Mickiewicz Library and Dramatic Circle, look forward to providing a space where the community can engage with thought provoking performance, lectures and literature while enjoying the authentic Polonia tavern.”

Through ESD, Torn Space Theater applied for and was awarded $748,000 from the East Side Corridor Economic Development Fund. As part of Buffalo Billion Phase II placemaking strategy, $65 million has been dedicated by Gov. Andrew Cuomo to revitalization efforts on the city’s east side through investments in stabilizing neighborhoods and ensuring opportunities for homeownership; strengthening commercial corridors by promoting mixed-use, walkable districts; improving regionally significant historical and natural assets; expanding opportunities for workforce connections; and supporting and growing entrepreneurship.

Since 2016, KeyBank and the First Niagara Foundation have provided more than $225,000 to support the revitalization of Torn Space Theater.

“The renovations at Torn Space Theatre will ensure that this great facility will continue to be a center of culture and performance on Buffalo’s east side that people from all areas of Western New York can visit and appreciate,” said Elizabeth Gurney, director of corporate philanthropy at KeyBank and executive director of the First Niagara Foundation. “KeyBank and the First Niagara Foundation are proud to support the revitalization of Torn Space Theater. We are honored to assist this project and others that are bringing new investment, excitement and opportunity to Buffalo’s east side.”

Light/Station was opened in November 2017 as a design studio, gallery, green room and performance space. Architect Christopher Romano and his firm, Studio North, won two American Institute of Architects awards for the transformational repurposing of the former gas mart into an architectural centerpiece for Torn Space.

Torn Space Theater is housed in the Adam Mickiewicz Library and Dramatic Circle. The Adam Mickiewicz Library and Dramatic Circle is a nonprofit private club founded in 1895. It is the oldest Polish American organization in Western New York and is the oldest surviving Polish library in Buffalo. The library holds about 12,000 volumes with 400 hand-copied plays. The bar serves over 50 different imported beers with a large Polish selection. The “Circle” is also home to a large annual Dyngus Day party, as well as other cultural events.

Torn Space Theater is located in the Historic Polonia district, only five minutes from downtown Buffalo and three minutes from the Larkin District. Throughout the season, Torn Space hosts performances, parties and special events, featuring the drink selection at Mickie’s as well as food from Buffalo favorites. The upstairs space is home to TST’s “Speakeasy Series” that regularly presents distinguished speakers for each production.