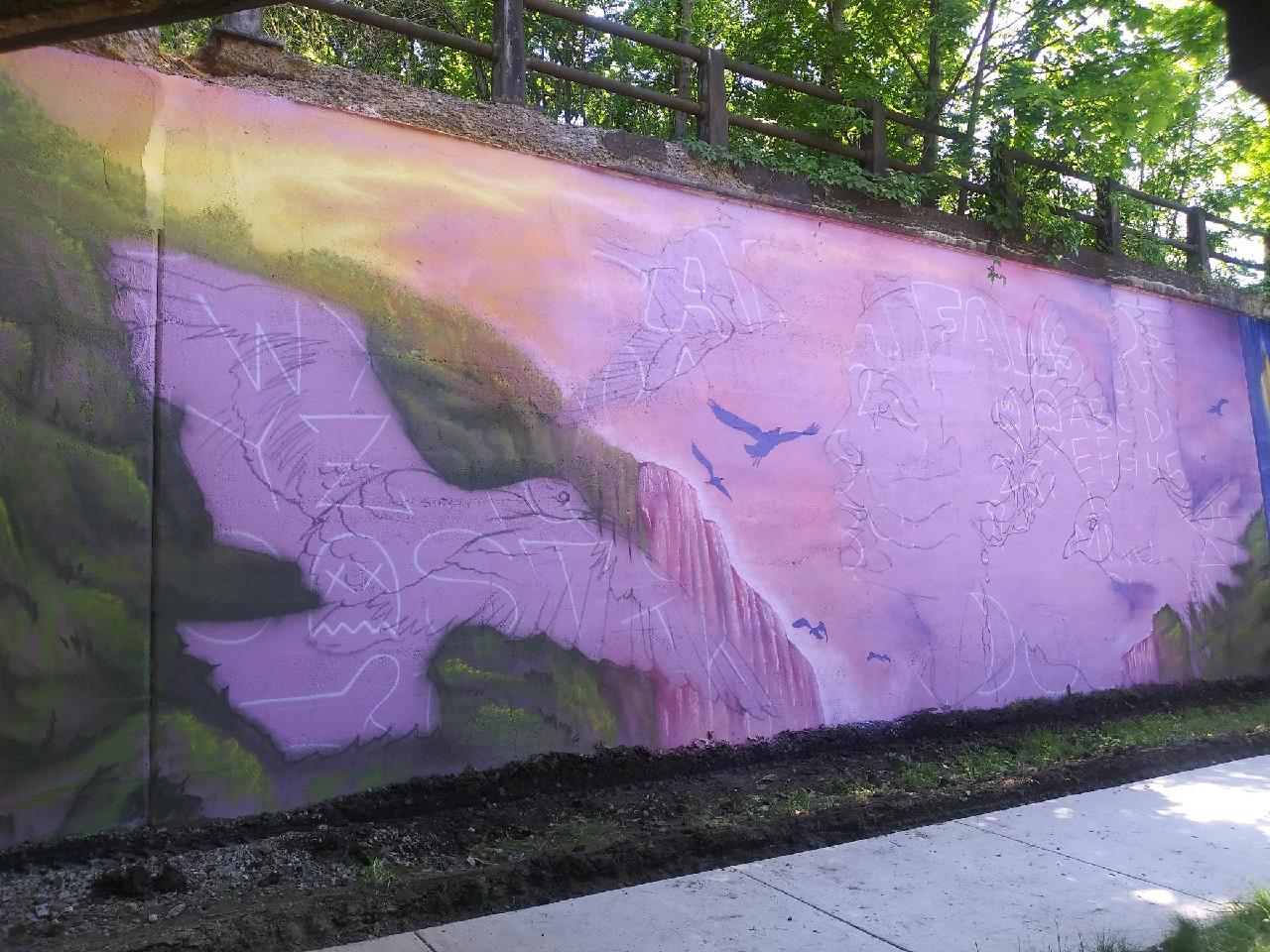 As Suarez says, he has been “painting on things that don’t belong to him” for about 20 years. His first large-scale mural is located in Albany. He eventually began participating in Wall Therapy, an art and community intervention project that started in Rochester around 10 years ago. Since then, Suarez has painted in cities including New York City, Miami, Chicago, Milwaukee, and Greensborough, Michigan – and now, he’s looking forward to experiencing the beauty of Niagara Falls as he works on his next piece, which pays homage to the people and natural surroundings of the community.

A common theme in Suarez’s work is a focus on wildlife indigenous to the area where he is painting. He has spent the past nine years working with animals alongside being a full-time artist – he’s currently a volunteer animal handler at Wild Wings Inc. based in Mendon Ponds, which houses over 30 species of permanently injured, nonreleasable birds of prey. As a result, he has started doing mural work that directly benefits conservation efforts.

Suarez applied and was selected for the NF Murals project in 2020 with an idea to combine the natural flora and fauna of the region and portraiture representing our youth. The mural will highlight seagulls common in the Niagara Falls region as a way to draw attention to the unique diversity of wildlife in the area.

“I wanted to incorporate species people would actually be able to see from the falls, since of course many of them live underwater,” Suarez said. “The falls attract several species of seagulls that come from widely varying areas, which is pretty unique to the area. My goal is for it to draw attention to the beauty of the natural world and inspire appreciation for it.”

The mural will also include a portrait of a young, mixed Japanese-Black woman whom Suarez has mentored in the past.

“In mentoring young artists, I’ve learned so much from them – especially the importance of young people of color seeing people like themselves represented in art,” Suarez said.

A press release stated, “Including this portrait is an homage to the powerful potential that lies within youth not just in Niagara Falls but across the globe, as well as the beauty of celebrating diversity – as our region is home to people from a unique blend of cultures and ethnicities.”

Saladin Allah, project coordinator for NF Murals, will be assisting Suarez as he paints his mural onto a wall near the Main Street and Depot Avenue intersection, across the street from the Niagara Falls Underground Railroad Heritage Center and next to Natalia Suska’s “Freedom Seekers” mural.

“This will be a unique piece in the way that it combines portraiture with wildlife,” Allah said. “It’s a great symbol for highlighting the vital relationship between humanity and nature. It’s fitting that it is located so close to the falls, a natural phenomenon that this region has truly been shaped by. It’s a unique statement about a city that exists around one of the natural wonders of the world.”

The Niagara Falls National Heritage Area said it is excited about working with Suarez as another piece is added to the NF Murals project. Project Director Ally Spongr said Suarez’s vision aligns perfectly with the initiative.

“I think this piece can be an inspiration for the local and national art community to focus on inclusivity and recognize the power that lies within our youth,” she said. “It draws appreciation to our natural surroundings as well as to the importance of empowering and supporting our Niagara Falls youth – two essential elements to creating the vibrant city we live in today.”

The NF Murals project is part of Niagara Falls Heritage Arts, the public art initiative of the Niagara Falls National Heritage Area. The NFNHA facilitates partnerships between artists, public and private organizations, and community members and stakeholders to envision and create public art, impacting the cultural landscape with pieces that reflect and honor the history and legacy of Niagara Falls. Learn more at nfmurals.org and discoverniagara.org.

To learn more about Suarez and his art, visit his website: http://aerosolkingdom.com/. 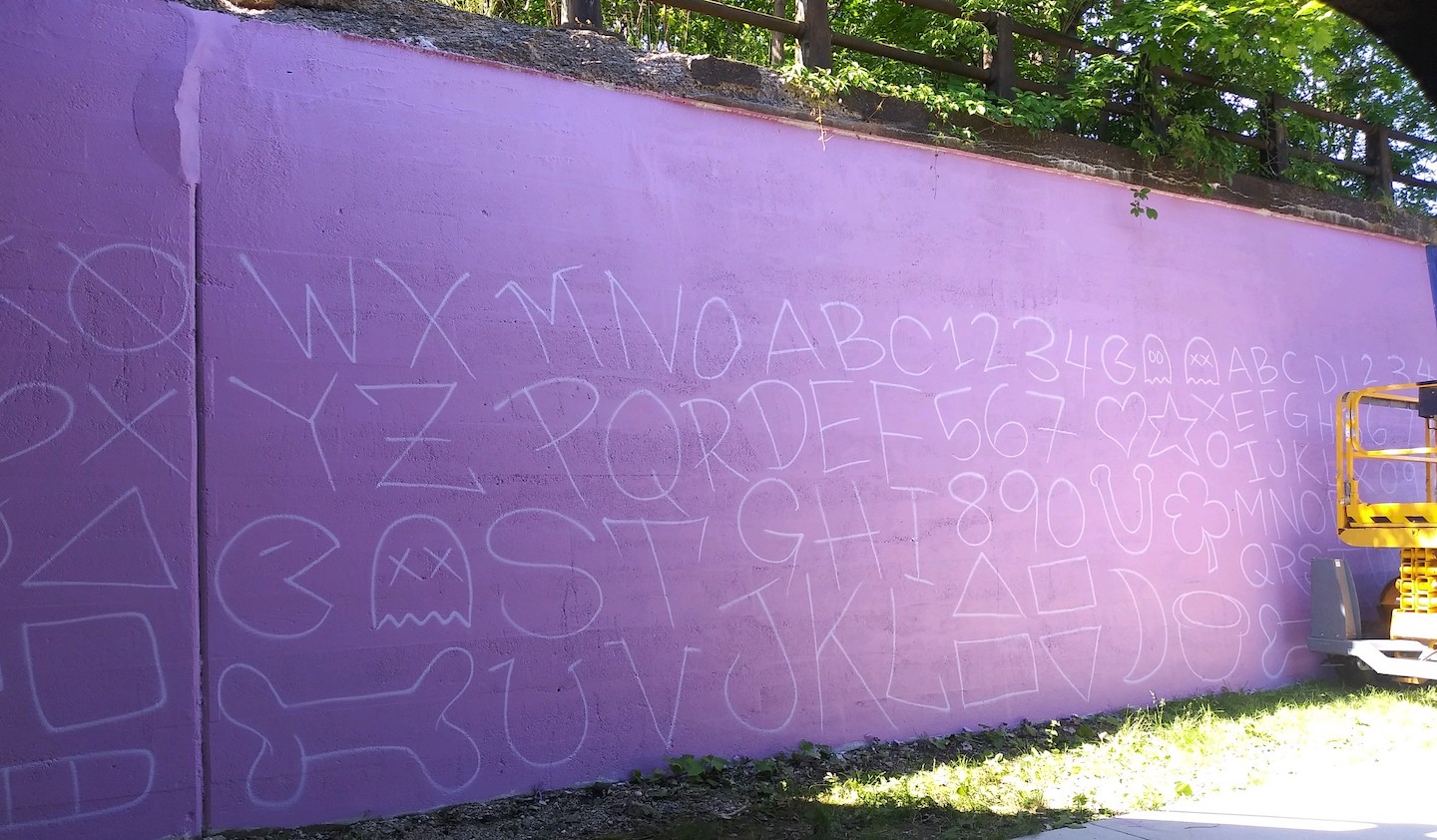