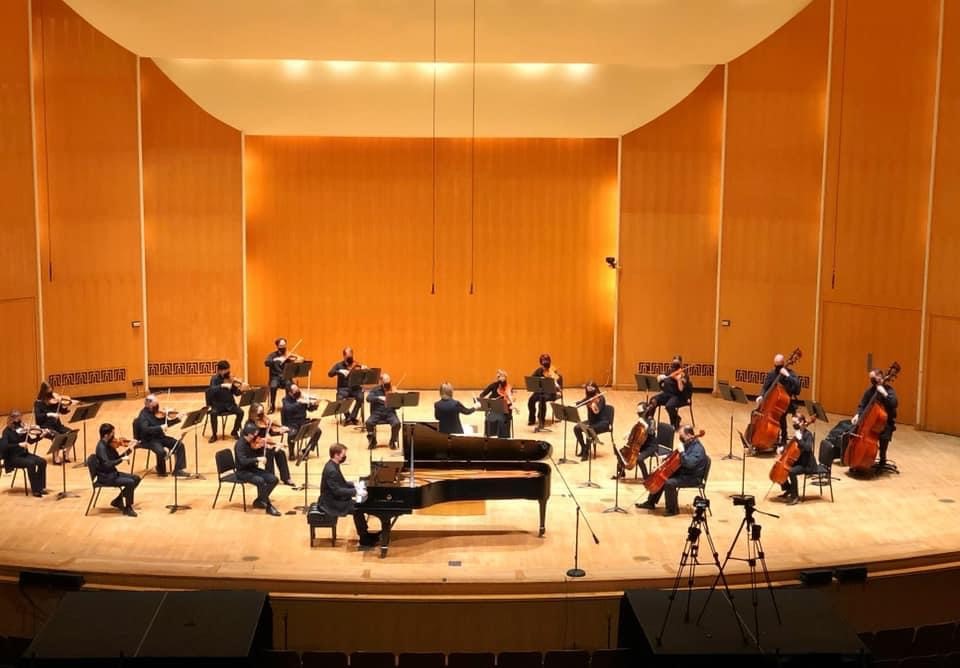 The BPO, masked up and socially distanced. (Photo by Connor Schloop/courtesy of the Buffalo Philharmonic Orchestra)

By Melvin Bankhead III/University at Buffalo

It’s not every day that UB researchers help ensure that beautiful music plays on at Kleinhans Music Hall. Still, that’s precisely what happened this spring.

With the pandemic raging, Kleinhans went quiet. However, as more people received vaccinations, and the number of local infections began to fall, the Buffalo Philharmonic Orchestra (BPO) brought small groups of musicians back onstage.

While the hall remained closed to the public, the BPO recorded performances and shared them online with loyal fans. New safeguards included Plexiglas barriers between musicians, positioning musicians 12 feet apart, and face coverings, where applicable.

Robin G. Schulze, dean of the College of Arts and Sciences (CAS), serves on the BPO’s board of trustees. When Hart raised the issue, she saw the opportunity for UB to help one of Buffalo’s great cultural institutions.

“As a public research university, the University at Buffalo has world-class experts and resources to tackle incredibly difficult problems. We also have extensive ties in the community and are committed to public service,” said Schulze, who reached out to Sean Bennett, associate dean for social sciences in CAS.

Bennett then touched base with Francine Battaglia, professor and chair of the department of mechanical and aerospace engineering in the School of Engineering and Applied Sciences. She uses computational fluid dynamics, which is a tool to calculate, simulate and analyze the flow of fluids (such as air) to solve problems on powerful computers.

Battaglia and graduate student Vedant Joshi studied the layout of the concert hall, taking care to identify the air supply vents evenly spaced in the ceiling. Then, assisted by the UB Center for Computational Research, they simulated how air would travel from the vents down to the stage – uninterrupted by musicians’ movement or breathing, or by the flow of air from the instruments.

With this information, they then focused on the flow of air on the stage itself. Specifically, they looked at three sample instruments – trumpet, tuba and trombone – and whether the Plexiglas separation barriers would keep the flow contained.

“We made computational models showing how air flows out of the three brass instruments when they are being played,” she said. “The other thing we wanted to look at is something called a bell cover.”

Battaglia and Joshi discovered the Plexiglas barriers were effective for preventing the spread of air coming from the trumpet and the trombone because the instruments’ bells were oriented straight ahead. Any air from them smacked directly into the barrier and was contained.

The Tuba, on the Other Hand …

“When we look at the tuba, because the bell is pointed toward the ceiling, the barriers were not effective, and the air would flow up and over the barriers,” Battaglia said.

When they placed bell covers over the instruments, “The bell covers slowed down the velocity of the aerosols and the air coming out, and that’s a nice feature because even with the tuba player, the aerosols don’t go up anymore,” she said.

The study ultimately concluded the protocols employed by the BPO – reduced numbers of musicians, social distancing and physical barriers – were effective in physically containing the aerosols emitted by the playing musicians and greatly limited aerosol transport to other musicians on the stage.

The use of bell covers reduced the emission of aerosols from the instruments by capturing 50%-75% of these particles within the fabric.

Battaglia, who credits Joshi for doing the lion’s share of the work, also recommended Plexiglas barriers be placed in front of all musicians who play forward-facing instruments, and that musicians – rather than be spaced 12 feet apart – could be placed 6 feet apart.

“The project is really a wonderful example of UB using its research expertise to work with a nationally recognized institution that is so important to the Buffalo community and beyond,” Bennett said.