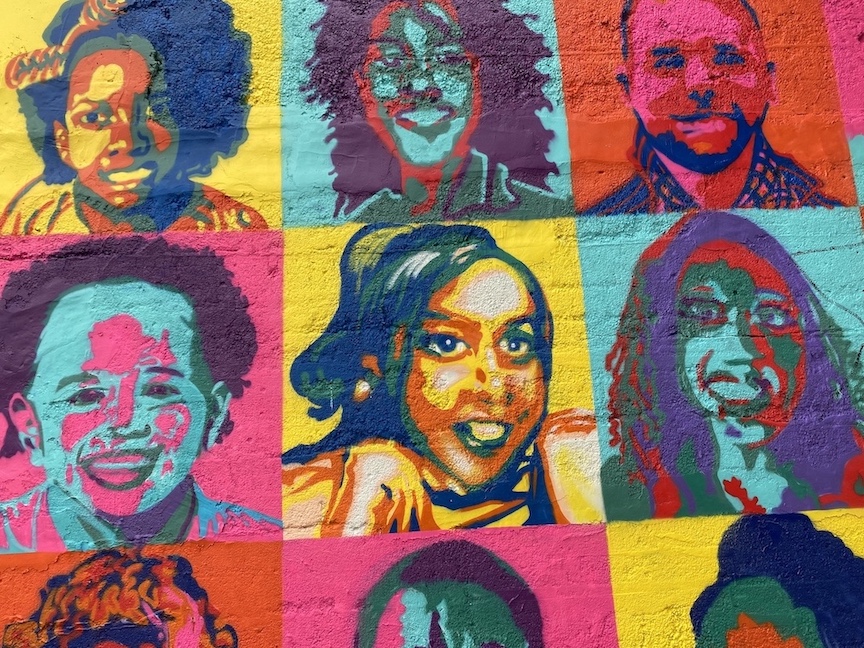 Artist Nate Reilly will be putting the finishing touches on his new mural on Whirlpool Avenue on Tuesday as part of the NF Murals project spearheaded by the Niagara Falls National Heritage Area.

Reilly, a resident of Niagara Falls, had proposed an idea for a mural that could help to beautify a highly utilized area near his home in the north end of the City of Niagara Falls. Although that particular wall is not yet ready for a mural, Reilly’s design found a home on a wall at 2245 Whirlpool Ave., next to the Niagara Falls Underground Railroad Heritage Center and U.S. Customs House. He began work placing the mural on the wall last Wednesday.

“I want people to feel welcomed when they see my mural,” Reilly said. “The piece is meant to help uplift the community and make people smile. All of the pieces in the NF Murals project so far have an element of hope that makes you feel good as you pass them. I want my piece to do that, too.”

That intention was the inspiration behind Reilly’s design, which features approximately 50 smiling faces of community members, using his signature cartoon-influenced, color-blocking style. The mural also features the quote, “Take a smile, leave a smile.”

This is Reilly’s first solo mural. Previously, he has worked on murals alongside his former teacher and local artist Rob Lynch, as well as Thomas Paul Asklar, who also worked on “The Niagara Movement,” another mural part of the NF Murals project. Reilly has been creating art since he was a child, developing an interest in painting in high school and completing an internship with Arts Services Initiative of WNY. Today, although he is not studying art full time, he is pursuing an art minor during his undergraduate studies at Cornell University. And, of course, he creates art constantly in his free time.

Tyshaun Tyson, NF Murals artist liaison and local artist also known as “The Left-Handed Bandit,” has been enjoying collaborating with Reilly to bring his vision to life.

“Nate’s design fits so well with the overall mission of this initiative,” Tyson said. “The mural is optimistic, joyful and vibrant, just like this community. And with so many faces being included, it is an inspiring representation of Niagara Falls and the power that lies within welcoming people of all backgrounds and perspectives to our city.”

According to Ally Spongr, project director of NFNHA, the location of this mural is key.

“This piece is located right near the U.S.-Canada border, facing the entrance from the Whirlpool Rapids Bridge into the North-End of Niagara Falls,” she said. “It will be one of the first views of America that people receive when they cross over. That means that the message can be even bigger than just Niagara Falls. It serves as a statement not just about this community, but about what this country can be: A symbol of hope and unity.”

NF Murals is part of Niagara Falls Heritage Arts, the public art initiative of the Niagara Falls National Heritage Area. The NFNHA facilitates partnerships between artists, public and private organizations, and community members and stakeholders to envision and create public art, impacting the cultural landscape with pieces that reflect and honor the history and legacy of Niagara Falls. Learn more at nfmurals.org and discoverniagara.org.

To view some of Reilly’s artwork, visit his website, https://natereillyart.crevado.com/.