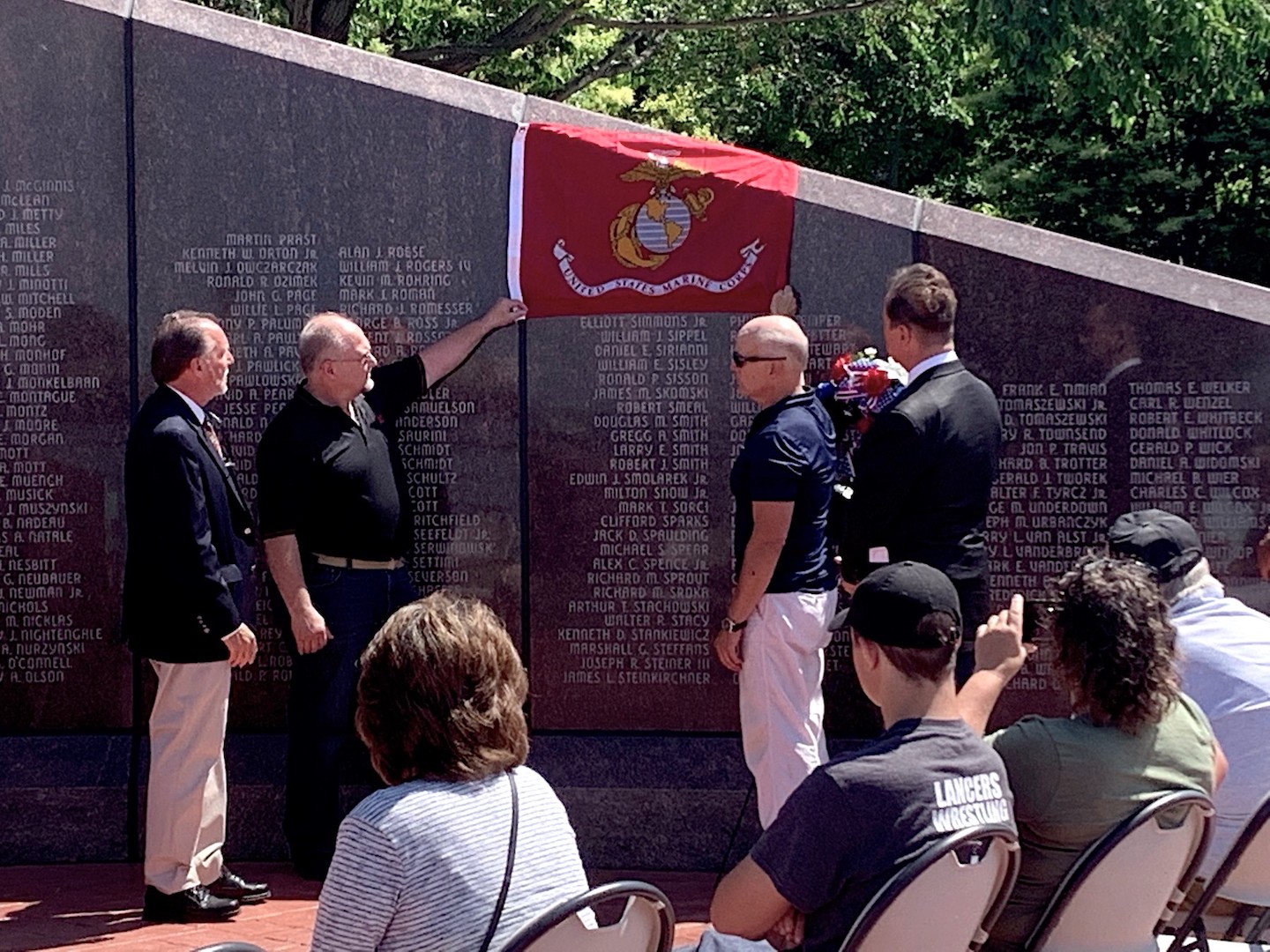 A scene from the ceremony courtesy of U.S. Rep. Brian Higgins' office.

“Over 50 years ago, Lance Cpl. Ziomek made the ultimate sacrifice while serving this nation,” Higgins said. “Through the persistent efforts of his family, his name has finally and rightfully been inscribed alongside the names of all the heroes listed on the Vietnam Veterans Memorial in Washington, D.C., and in Buffalo, New York. This lasting tribute represents the eternal reverence of a grateful nation.”

Marzello said, "We are very grateful to have been part of the effort, along with the Ziomek family and Congressman Higgins, to right this wrong. LCpl. Ziomek sacrificed his young life in duty to his country and we are honored to add his name to our Vietnam Veterans Memorial where he will join the names of his fellow fallen soldiers. May he rest in peace knowing he earned his place of honor and will never be forgotten."

Frederick “Fred” Ziomek was born in Buffalo on Feb. 21, 1951. He enlisted in the U.S. Marine Corps in August of 1969 after graduating from Maryvale High School. Ziomek served with the 1st Marine Division for eight months, largely in Vietnam. He advanced quickly through the ranks and was promoted to lance corporal, becoming a machine gun squad leader. While serving in South Vietnam with Company L, 3rd Battalion, 7th Marine Regiment, 1st Marine Division, Ziomek contracted malaria. He was evacuated to a U.S. Army hospital in Okinawa, Japan, where he was officially transferred to a unit stationed in the area. Days later, on Oct. 6, 1970, he passed away from the infection at age 19.

“Our beloved family member, Frederick Ziomek, lost his life in the Vietnam War more than 50 years ago. While he is gone, he will never be forgotten. His courage will be remembered in the hearts of those that loved him, and he will forever and always be memorialized as our hero. Our freedom and liberties carry on because of the sacrifice of Fred and his fallen comrades; for that we are eternally thankful,” said Donna Quigley, treasurer of Buffalo Niagara Honor Flight and Ziomek’s cousin.

When Ziomek passed, he was no longer officially with his Vietnam unit, so his name was not originally included in the Vietnam Veterans Memorial in Washington, D.C. Beginning in the 1980s, his family advocated to have his name included on the wall. Ziomek's name was finally inscribed on the Washington memorial on Sept. 15, 2020; he was one of just three veterans added in 2020.

The Vietnam Wall at the Buffalo and Erie County Naval & Military Park features the names of local fallen soldiers. Higgins’ office worked with Ziomek’s family and the Naval Park to coordinate the addition of his name. VVA Chapter 77 funded the engraving.