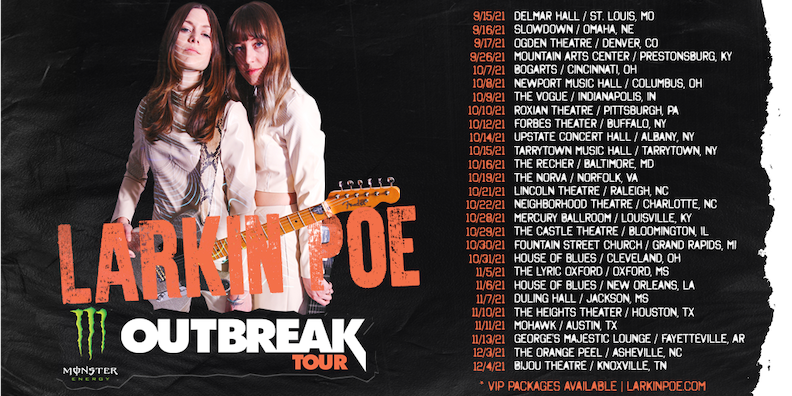 The pair will join previous alumni of the tastemaker concert series, including Lindsay Ell, Bones UK, Post Malone, Kendrick Lamar, Macklemore, The Chainsmokers, Mike Shinoda and Cole Swindell. Since its inception in 2011, the Monster Energy Outbreak Tour has grown into the largest national touring brand in the club and theater space, showcasing the hottest breakthrough artists on nationwide tours.

In 2020, Larkin Poe ascended to No. 1 on an array of Billboard charts with their widely acclaimed fifth studio album, “Self Made Man,” available via the band's own Tricki-Woo Records. The COVID-19 lockdown didn’t keep the Lovells from reaching their fans; the duo performed a number of "Home Sweet Home" livestream concerts and added to their much-loved YouTube covers series. Last summer, they released their second full-length of the year, “Kindred Spirits,” a self-produced collection of stripped-back covers both classic and new, including songs by the Allman Brothers Band, Robert Johnson, Elton John, Post Malone and Ozzy Osbourne.

This spring, the band launched LPTV, a subscription-based livestreaming and video-on-demand platform offering exclusive concerts and original content. The duo also joined Dierks Bentley and The War and Treaty to perform “Pride (In the Name of Love)” at the 2021 ACM Awards. They will also be featured on a track on ZZ Top frontman Billy Gibbon’s forthcoming solo album, “Hardware.”

As all of the music for “Self Made Man” was originally written with live performance in mind, Larkin Poe is truly excited to finally let the songs breathe.

“We can’t wait to get back on stage with ‘The Monster Energy Outbreak Tour’ this fall for the first time since our album, ‘Self Made Man,’ came out!” Larkin Poe said. “It’s going to feel so good to be back in a room with people celebrating live music again!”

Fans can stop by www.larkinpoe.com.