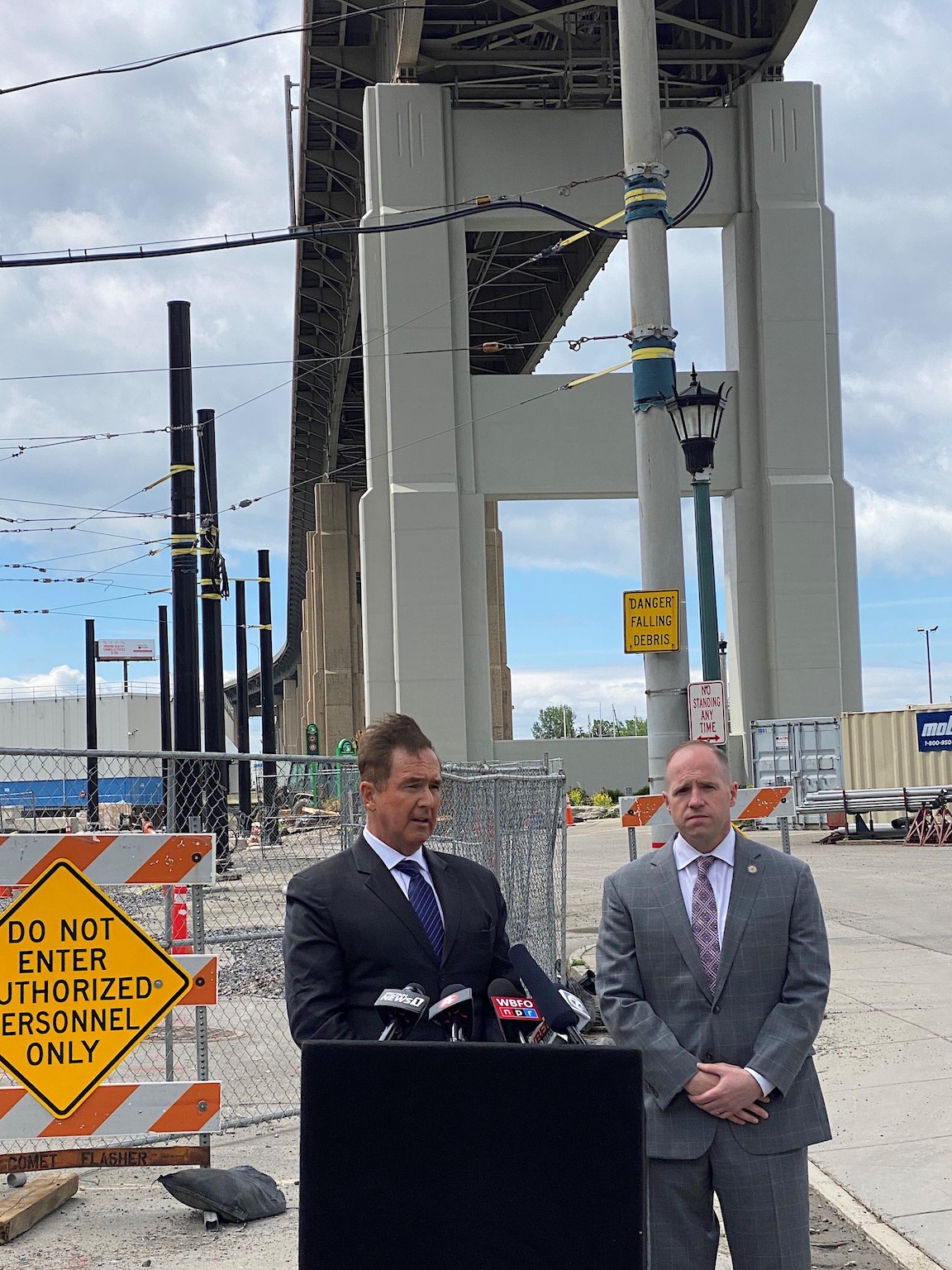 Congressman Brian Higgins and New York State Sen. Tim Kennedy are detailing what they called serious safety factors among the many reasons for removal of the Buffalo Skyway.

“The problems associated with the Skyway are never going away so we need to decide as a community if we are going to settle or demand better,” said Higgins, who issued a report detailing the safety concerns related to the Skyway. “For too long we accepted the status quo, but recent projects demonstrate that when you dare to reach for change, more positive transformation is possible. We saw that at Canalside, on Fuhrmann Boulevard, Ohio Street, Buffalo Harbor State Park and Wilkeson Pointe. And we will see that if we demand better than the Skyway for Buffalo’s future.”

Senate Transportation Chairman Kennedy said, "As Buffalo looks to ‘Build Back Better,’ we need to aim high. Replacing the Skyway absolutely needs to be a part of that. This bridge is a relic of the past, a vestige of an era that valued cars over communities. We can do better, helping to invigorate our neighborhoods, providing new recreational opportunities, and reconnecting downtown to our waterfront. I want to thank Congressman Higgins for his leadership in this fight and for his dedication to reimagining what Buffalo can be."

The elected leaders called the Skyway:

“Dangerous”: A press release stated, “Diverting traffic off the Skyway or around hazardous situations isn’t a novel idea. It happens on average 190 times each year due to accidents, disabled vehicles and weather. The high-profile, tight lanes and proximity to Lake Erie make it especially prone to slippery conditions, extremely high wind gusts, fog and dangerous driving conditions.

“Standing under the structure is equally risky, as evidenced by the ‘Dangerous Falling Debris’ signs posted under the Skyway. The presence of a large expressway over Canalside, a children’s museum, bicycle and pedestrian paths, a waterfront boardwalk, concert and event space, and beside a state park create unnecessary, serious hazards.”

“Dated”: The press release stated, “By engineering terms, the Skyway is categorized as ‘fracture critical’ and ‘functionally obsolete.’ Bridges today are built with redundant structural elements.

Most of the Skyway is held up by concrete piers supporting a steel substructure, which then supports the deck. At the point where the piers meet the substructure are 167 individual 1950s-era corroded metal pins. The failure of any one of these 167 pins would cause a catastrophic collapse, which makes the Skyway ‘fracture critical.’

“The Skyway, as it stands, does not meet present day safety standards and would not be built today. The lack of shoulders, inadequate lines of sight for merging, unacceptable ramp features and other outdated design flaws make the Skyway ‘functionally obsolete.’ ”

“Dirty”: The press release stated, “The Skyway hangs over public land intended to serve as a feature destination where people can enjoy healthy, outdoor recreational opportunities, yet it remains the largest cause of environmental degradation in the area. Emissions above are polluting the air, runoff from the elevated structure is polluting the land and water below, and trucks and traffic are creating constant noise pollution.

“Removing the Skyway would eliminate 30.5 acres of concrete and asphalt surfaces from the Outer Harbor, and an estimated 36 million gallons of contaminated highway runoff annually.”

Higgins and Kennedy argued Buffalo deserves better. They said residents and visitors should have access to waterfront parks and trails free from the safety and environmental hazards that will always be present as long as the Skyway remains in place. 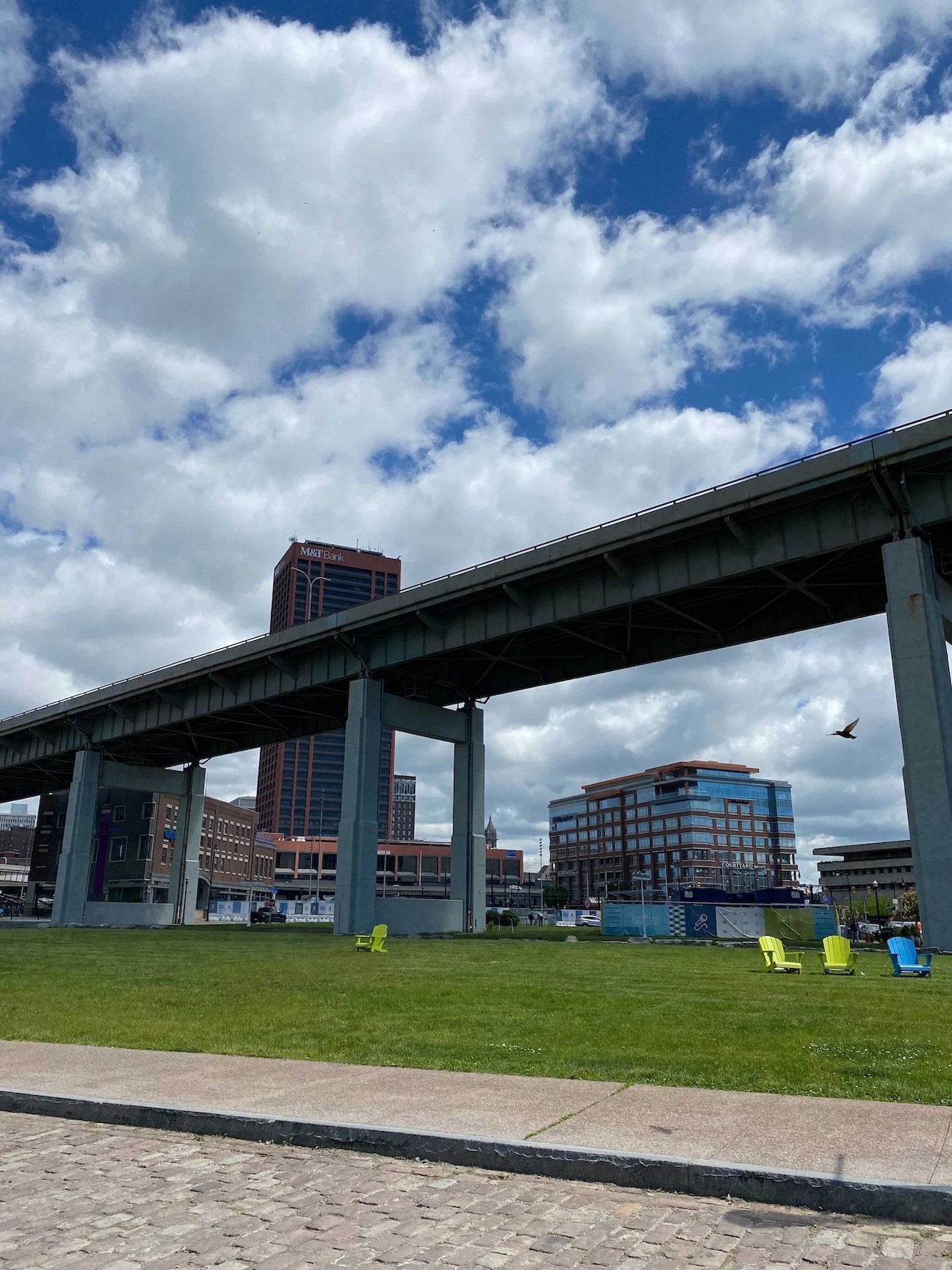