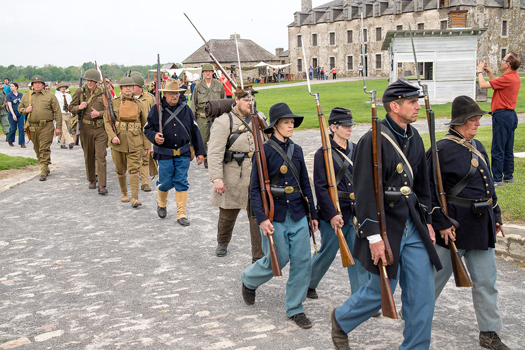 'Soldiers through the Ages' at Fort Niagara

On Memorial Day weekend, visitors to Old Fort Niagara will explore four centuries of military history as the venue hosts its annual “Soldiers through the Ages” event. Displays of vintage military vehicles and period camps will be featured throughout the site.

Visitors will be able to walk back in time from the Cold War to the early 18th century, viewing period camps and living history programming. Among the special demonstrations will be “Matchlocks to M1s,” a look at military weapons technology from the early 17th century through the 1960s; fife and drum concerts; and artillery firing demonstrations. The event will also feature cooking programs, a history of military rations and the evolution of military uniforms.

“This event is different than anything else we present during the year,” Old Fort Niagara Executive Director Robert Emerson said. “Our events usually focus on a particular historical event or time period. This program is different, allowing visitors to compare and contrast almost 400 years of military history.”

Fort Niagara was one of the longest occupied military bases in North America. The French erected the first fort at the site in 1679. After the construction of the French Castle in 1726, the fort remained a military post until the U.S. Army decommissioned it in 1963. Over the course of many years, the fort was the scene of a grueling siege, devastating artillery bombardments, a surprise attack, a famous 1,000-yard rifle range, officer training facility, induction center and prisoner of war camp. Its final role was part of the missile defense system that protected Western New York during the Cold War.

This long and colorful history will be brought to life through living history programs and demonstrations on Memorial Day weekend. Hours for the event are 10 am to 4 p.m., Saturday and Sunday, May 29-30. On Monday, Memorial Day, the fort joins Lake Ontario Post No. 313, Veterans of Foreign Wars, at the post cemetery for an 11 a.m. memorial service for fallen veterans.

More information is available at www.oldfortniagara.org or by calling 716-745-7611.