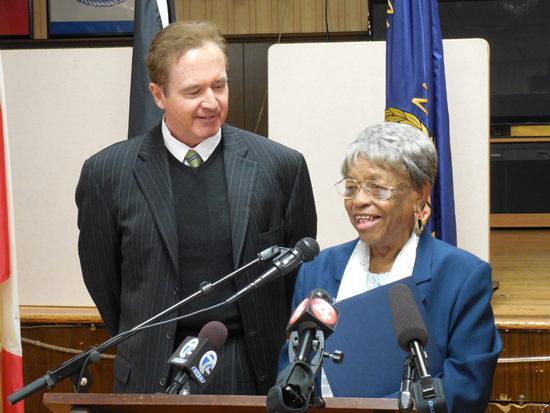 Congressman Brian Higgins announced the introduction of H.R. 2142, which designates the Central Park Post Office at 170 Manhattan Ave., Buffalo, as the “Indiana Hunt-Martin Post Office Building” in honor of Women’s Army Corps (WAC) veteran Indiana Hunt-Martin who was part of the first African American WAC unit – and the only to serve in Europe during WWII.

“Through her willingness to serve, Indiana Hunt-Martin represented the best of American ideals, working to connect soldiers fighting for freedom with their families back home,” Higgins said. “While her loving family, our community, and our country will miss her greatly, the renaming of this Buffalo post office will stand as a testament to her legacy and an honorable reminder of her life.”

City of Buffalo Mayor Byron Brown said, “I strongly support this measure to rename the Central Park post office after Indiana Hunt-Martin. Not only will this honor her tremendous service to her country and bravery during WWII, it will also be a daily reminder to all those who use this post office, and this community, of the tremendous contributions African American women have made and continue to make to in every branch of the U.S. military.”

Assembly Majority Leader Crystal Peoples Stokes added, “Indiana Hunt-Martin represented what it truly means to be an American patriot. Hunt-Martin served in the first African American female battalion and the only all-women battalion in WWII. When she returned home, Hunt-Martin continued to serve her community. She was a longtime member of the Erie County Women’s American Legion Post 1586 and was a longtime resident in the City of Buffalo. The renaming of the Central Park Buffalo post office is a humbling way to honor her legacy.”

Hunt-Martin, who passed away Sept. 21 at the age of 98, was a member of the Six Triple Eight Central Postal Directory Battalion, which was responsible for processing and routing undelivered mail in World War II to restore vital communications between families in the U.S. and Americans stationed in Europe. From 1978 until her passing, Hunt-Martin frequented the U.S. Postal Service office on Manhattan at least once a week to purchase stamps, pick up mail and send letters. At the end of her life, when told she would have a post office named after her, she was excited and honored.

Retired U.S. Army Col. Edna W. Cummings, Six Triple Eight advocate and producer, said, “With the odds stacked against them, Ms. Hunt Martin and the Six Triple Eight were humble soldiers who far exceeded expectations. I am proud that our nation is taking steps to secure their legacy.”

A press release stated, “Back then, she saw racism firsthand as she witnessed separate drinking fountains and segregated railroad cars. They endured sexism and racism while serving in the Six Triple Eight. Throughout her life, she made it clear that no amount of discrimination she faced would stop her from serving her country. Her bravery helped to pave the way for future generations of African American female soldiers.”

Indiana Hunt-Martin graduated from Niagara Falls High School in 1940 and worked at the Carborundum Co. before joining the Women’s Army Corps on Sept. 15, 1944.

She was honorably discharged from the U.S. Army on Nov. 10, 1945. After the war, Hunt-Martin worked in New York City for the State Department of Labor before being transferred to the Labor Department’s Niagara Falls office in 1949 and later the Buffalo office in 1964. She worked for the New York Labor Department for a total of 41 years, before her retirement in 1987.

In 2014, just days before the 69-year anniversary of her honorable discharge, Higgins honored her work by presenting Pvt. Hunt-Martin with the Women’s Army Corps Service Medal, the European-African-Middle Eastern Campaign Medal, the World War II Victory Medal, and the Honorable Service Lapel Button for her service during World War II. Higgins is also an original cosponsor on H.R. 1012, the Six Triple Eight Congressional Gold Medal Act of 2021. The bill would honor the work of the 6888th by awarding those in the unit the Congressional Gold Medal.

A trailblazer until her final days, Hunt-Martin was a grand marshal in the National Memorial Day parade in Washington, D.C., in 2019, 77 years after she first visited D.C. on her way to basic training at Fort Oglethorpe in Georgia. She is laid to rest at the historic Oakwood Cemetery in Niagara Falls.

The idea to rename the post office for Hunt-Martin was brought to Higgins by Korean War veteran Sandi Williams who serves as president and founder of United Veterans of Buffalo. The bill is supported by several other individuals and organizations, including the Bennett-Wells American Legion Auxiliary No. 1780, the Johnetta R. Cole AMVETS Post No. 24 and the Jesse Clipper American Legion Post 430.