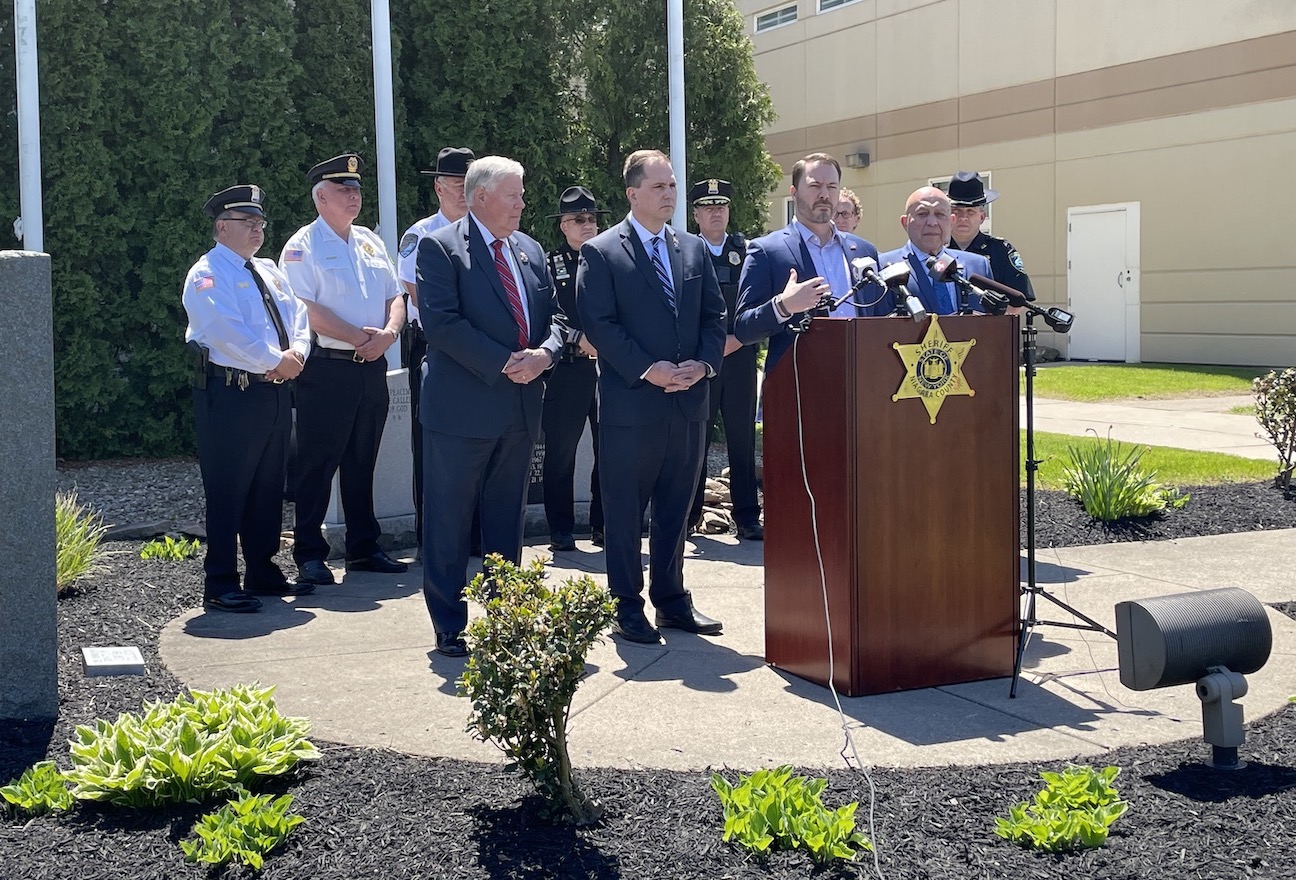 On Friday, New York State Senate Republican Leader Rob Ortt joined Assembly members Angelo Morinello and Mike Norris and Niagara County Sheriff Michael Filicetti to promote a package of pro-law enforcement legislation introduced earlier this week in Albany. The “Protect Those Who Protect Us” package – introduced by the Senate Republican conference – encompasses several new and existing pieces of legislation aimed at honoring and remembering the men and women of law enforcement. They said it will also bring attention to the challenges of modern-day policing.

“In recent years, New York state has taken a turn for the worst in terms of law and order, with the scales of justice tipped heavily in favor of violent criminals,” Ortt said. “The men and women of law enforcement go to work every day to serve and protect the communities in Western New York and across our state. We must restore common sense when it comes to public safety, and it begins with packages like the ‘Protect Those Who Protect Us’ initiative.”

Some highlights of the legislative package to “Protect Those Who Protect Us” in New York include:

√ S2561 – Strengthens the penalties for assaulting a police officer.

√ S3208 – Strengthens penalties for causing a police officer to come into contact with foreign substances or objects, such as bottles, flammable liquids, etc.

√ S3465 – Would make it a crime to falsely accuse a police or peace officer of wrongdoing in the performance of their duties. This is necessary because of the repeal of Section 50-A and would protect law enforcement against unfounded or unsubstantiated claims.

Proposed legislation also would enact the “Defund Municipalities that Defund the Police Act.” This bill would withhold state funding to a municipality that abolishes, disbands or significantly reduces its police department.

A press release stated, “Violent crime in New York City has risen at an alarming rate over the past year, with the most recent report by the NYPD showing that overall index crime rose by 30.4% compared to April 2020. This rapid increase in crime was driven in part by a 35.6% increase in felony assault, a 28.6% increase in robbery, and a 166.1% increase in shooting incidents.”

According to a recent “State of Safety in America” report by Safewise, New York is the “most worried about safety” state in the nation, with 70% of New Yorkers reporting they are “concerned daily” about their safety. In addition, only 40% of New Yorkers feel safe in their everyday lives, while 78% think crime is increasing.

√ S2034 – Disability and Death Benefit – Provides a $500,000 benefit for police officers who are seriously disabled or die from injuries incurred in the line of duty.

√ S3464 – Failure to Retreat – Makes it a Class D Felony for any person to approach or remain within 25 feet of a police officer engaged in the performance of their duties when an officer orders them, and they fail to do so.

√ S6231 – Resisting Arrest – Enhances the penalty of resisting arrest from a Class A misdemeanor to a Class E Felony. Adds resisting arrest to the list of E Felonies where a police officer may arrest someone instead of being required to issue an appearance ticket.

Norris said, “I am proud to support our law enforcement officials who put their lives on the line to keep us safe and to stand up against policy initiatives that put our community at risk. Recent legislation such as changes to bail reform highlights the fact that the downstate-driven majorities are more concerned about the safety and well-being of alleged criminals than that of the victims and the brave men and women that keep our community safe. Our state is at a crossroads, and we need to enact legislation that protects our law enforcement officials. That is why I fully endorse the ‘Protect Those Who Protect Us’ package and look forward to working with my colleagues to restore common sense criminal justice practices back to our state.”

Morinello said, “Public safety must be a priority right now. The ‘Protect Those Who Protect Us’ package is one way to help ensure that community safety is put first and foremost. The men and women of law enforcement are the ones who run towards danger and not away from it, and they are willing to put their lives on the line every day to keep us all safe. We must continue to honor and support the men and women in blue.”