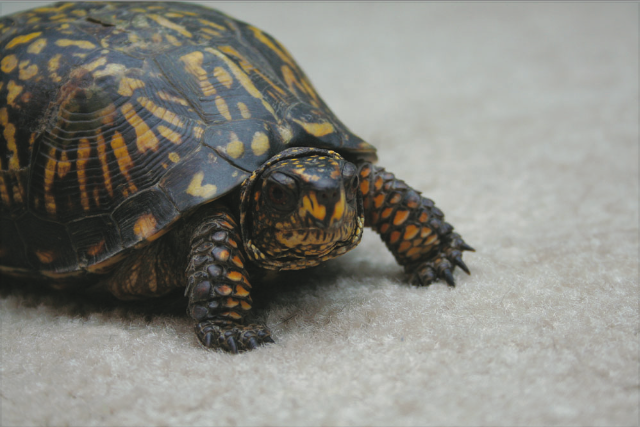 DEC urges New York drivers to 'give turtles a brake'

In May & June, motorists should be on lookout for turtles crossing road to nest

World Turtle Day is May 23

New York State Department of Environmental Conservation Commissioner Basil Seggos reminded New Yorkers that turtles are on the move in the months of May and June, and asked drivers to "give turtles a brake."

In New York, thousands of turtles are killed each year when struck by vehicles while migrating to nesting areas. DEC said, “Increasing public awareness of turtles’ nesting behavior can help save this important species.”

“A turtle's shell provides good protection from natural predators, but it cannot protect a turtle from being hit by a vehicle while crossing a road," Seggos said. “Vehicle strikes are a major cause of turtle mortality, and New York’s native turtles are more active this time of year as they seek sandy areas or loose soil to lay their eggs, sometimes even near the side of a road.”

DEC said, “If a motorist sees a turtle on the road, drivers are encouraged to slow down to avoid hitting it with their vehicle. If the vehicle can safely stop, motorists should consider moving the turtle to the shoulder on the side of the road in the direction it was facing. Motorists are advised not to pick turtles up by their tails to avoid injuring the turtle. Most turtles, other than snapping turtles, can be picked up by the sides of their shell. Snapping turtles have necks that can reach a long distance and have a strong bite, so if motorists try to help a snapping turtle, they should pick it up by the rear of the shell near the tail using both hands or slide a car mat under the turtle to drag it safely across the road.”

DEC reminds people to never take turtles home. All native turtles are protected by law and cannot be kept without a DEC permit.

“All 11 species of land turtles native to New York are in decline,” DEC said. “Turtles are long-lived species and it takes many years for a turtle to reach maturity. Even losing one mature female can have a negative impact on a local population. Learn more about New York’s native turtles at https://www.dec.ny.gov/animals/277.html.

“Four species of sea turtles can be found in New York waters, and these turtles are all either threatened or endangered. Visit https://www.dec.ny.gov/animals/112355.html to learn more about sea turtles.”

To help sea turtles, New Yorkers are encouraged to:

√ Reduce, reuse, recycle and rethink: These are steps to help protect all marine species;

√ Don't litter: Unwanted trash makes its way just about everywhere, including into waterbodies;

√ Don't release balloons or lanterns: Releasing balloons into the environment is potentially fatal for sea turtles, as they commonly mistake balloons and plastic bags for prey items like jellyfish;

√ Volunteer for beach and park clean-ups; and

In addition, DEC recognizes May 23 as World Turtle Day. American Tortoise Rescue (ATR), a nonprofit organization dedicated to the protection of all species of tortoise and turtle, created World Turtle Day to celebrate and protect turtles and tortoises and their disappearing habitats around the world.

DEC said, “These gentle animals have been around for 200 million years, yet are rapidly disappearing due to smuggling, the exotic food industry, habitat destruction, climate change and the pet trade.”