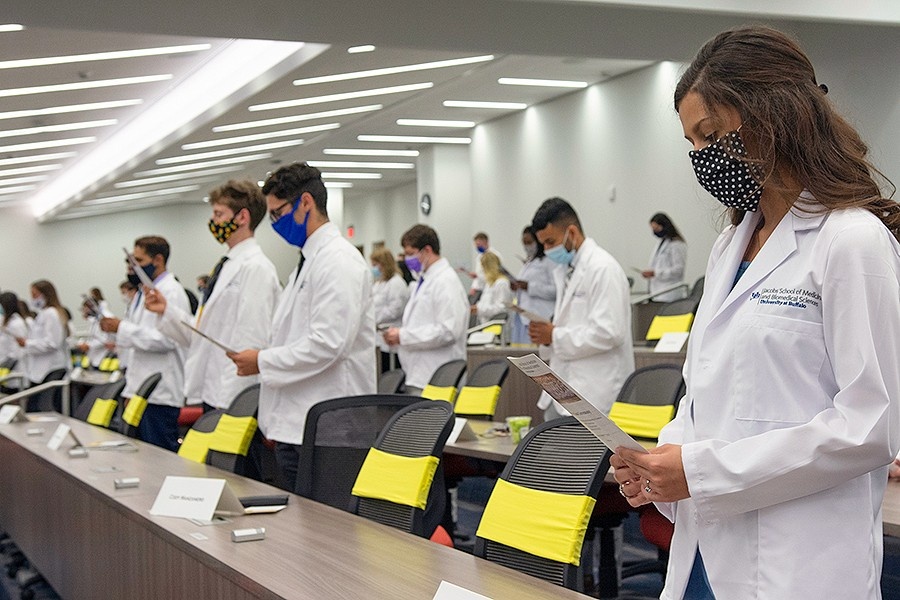 In August 2020, medical students participated in a socially distanced white coat ceremony during the COVID-19 pandemic. (Photo by Sandra Kicman)

On the anniversary of its founding 175 years ago, UB celebrates its origins in study of medicine

They developed a sickle cell anemia test for newborn babies, found a way to make blood transfusions safer, and discovered that the body can, indeed, attack itself. They brought new scientific understanding to Buffalo, even when their ideas were initially ridiculed and later accepted as essential to human health. They fought and curbed devastating outbreaks in the city from typhoid, cholera and the 1918 influenza pandemic; today, they are fighting COVID-19.

“They” are the faculty, students and alumni of the Jacobs School of Medicine and Biomedical Sciences at the University at Buffalo, which this month begins its 175th anniversary year.

Founded on May 11, 1846, as the University of Buffalo, the institution existed originally as a private medical school.

“As UB celebrates our 175th anniversary, we want to recognize the university’s origins as a medical school, share its compelling history, and highlight the integral role that it has played – and continues to play – in the health and well-being of the Western New York community,” UB President Satish K. Tripathi said.

Now, on the occasion of UB’s 175th anniversary, the UB community is marking the anniversary by focusing on the university’s roots in medicine with a special commemorative issue of the Jacobs School’s alumni magazine, UB Medicine. Currently available by request as a PDF, it will be available online later this month.

Michael E. Cain, M.D., vice president for health sciences at UB and dean of the Jacobs School, said the magazine will help reveal to the wider community the critical role that the medical school has played in the health and well-being of Western New Yorkers for 175 years.

“Over the last 175 years, many physicians who have practiced in Western New York – particularly in Buffalo and Erie County – earned their medical degree at the University at Buffalo,” he said. “For almost two centuries, we have consistently provided the physicians who take care of those of us who live in this community.

“One way to train future physicians to deliver the best clinical care is to have them be part of an institution that asks questions, challenges traditional paradigms, creates new knowledge and uses that new knowledge to advance the standard of care. The Jacobs School has consistently delivered this benefit throughout its 175 years of existence.”

A History of UB & Medicine in WNY

The magazine opens with a fascinating 14-page timeline that is as much a history of medicine in Buffalo as it is a history of UB, beginning at 1801, the date when Cyrenius Chapin, Buffalo’s first physician, settles in Western New York. It describes the burning of Buffalo by the British in 1813 and the rebuilding of what was then the village of Buffalo.

In 1846, the University of Buffalo was founded, consisting of the medical department, which remained the university’s sole unit throughout its first 40 years.

The timeline includes the establishment of some of Buffalo’s first hospitals, from the 1848 founding of Sisters of Charity Hospital, the region’s first teaching hospital, and its role in caring for patients during the 1848 cholera outbreak, to the establishment in 1918 of a hospital – now Erie County Medical Center – for patients with tuberculosis on Grider Street. In 1858, Buffalo General Hospital was established and, in 1892, Children’s Hospital – now the John R. Oishei Children’s Hospital – was founded, becoming one of the nation’s first pediatric hospitals. The Veterans Administration hospital was founded in 1950.

The magazine also traces the critical fundraising that enabled the school’s growth, starting with the first efforts by Charles Cary of the Class of 1875, whose work resulted in the school’s new building, at 24 High St., in 1893. In 1920, the school raised $5 million in 10 days from 24,000 donors.

In 1929, UB’s second $5 million Endowment Fund Campaign closed on the same day as the stock market crash; thus, many pledges were never recovered due to financial hardship. Subsequent gifts are also noted, including those that led to additional buildings and expansion to what is today the South Campus.

In 2011, nearly $50 million was left to the school by George M. Ellis Jr. of the Class of 1945, a family doctor in the rural Midwest who had saved for nearly 70 years. The gift came just as UB was making the decision to move the medical school downtown, which Cain said at the time “made all the difference in our having the confidence to plan and move forward.”

In 2015, Jeremy M. Jacobs, his wife, Margaret, and their family gave $30 million to the School of Medicine and Biomedical Sciences, a historic gift. In recognition of Jacobs’ tremendous service and philanthropy to the university, the UB medical school was named the Jacobs School of Medicine and Biomedical Sciences. The gift made the Jacobs family one of the university’s top benefactors, with gifts exceeding $50 million.

The timeline highlights the rich, intertwining medical histories of UB and the City of Buffalo, including:

√ The introduction of the clinical teaching of obstetrics in the U.S. by James Platt White, M.D., who in 1850 had medical students learn by watching a live birth, now a standard medical education practice.

√ The 1901 assassination of President William McKinley at the Pan-American Exposition in Buffalo and the controversy that continues over whether he would have survived had the renowned surgeon Roswell Park been available.

√ A description of the city’s response to the 1918 influenza pandemic led by Franklin C. Gram, M.D., acting health commissioner and a graduate of the Class of 1891, whose “draconian” measures helped curb morbidity in Buffalo.

√ Other intriguing stories include that of Devillo W. Harrington, a Civil War soldier from the New England regiment, some of whose members were transported to Buffalo General for care.

Harrington was badly wounded and was left on the battlefield for three days before being evacuated. When he arrived in Buffalo, his case was considered hopeless until the UB interns who treated him decided to try a new type of surgical dressing on him: permanganate of potash. It was one of the first antiseptic surgical dressings.

Not only did he recover, but he then attended UB’s medical school, graduating in 1871 and becoming UB’s first professor of genitourinary and venereal diseases. He later established the Harrington Lectureship, which has brought many outstanding physicians to UB throughout the school’s history.

Historic firsts among the school’s graduates are also highlighted. In 1876, Mary Blair Moody was the first woman to graduate from the UB medical school. She was 40 and a mother of six children when she graduated and went on to be named a fellow of the American Association for the Advancement of Science. She founded the Women’s Educational and Industrial Union and supervised its hygiene and physical education program.

Joseph Robert Love was the first Black graduate of the school in 1880. Born in the Bahamas, Love came to Buffalo, where he was ordained and did his medical training in preparation for medical missionary work in Haiti. He later moved to Jamaica, where he became involved in political work and in advocating for Black civil rights.

The timeline includes the recruiting of renowned surgeon Park to Buffalo from Chicago in 1883 and the eventual establishment in 1898 of the state-funded New York State Pathological Laboratory in Buffalo, housed at the UB medical school. It was the world’s first laboratory dedicated to the study of cancer, and Park was its first director. It changed names in 1911, and in 1946 was renamed for Park, becoming what is now Roswell Park Comprehensive Cancer Center.

As important as an understanding of UB’s history in medicine is, Cain also wanted the magazine to focus on what the Jacobs School will do in the future. To that end, the issue includes one-page essays from many of the school’s foremost faculty covering a wide range of topics, from health policy and health disparities and stem cells, to biomedical ethics, big data, team science and gender equity.

The issue also spotlights two current, historic moments the world is experiencing: the COVID-19 pandemic and the racial reckoning that resulted from the murder of George Floyd last May. Articles delve into how the pandemic swiftly moved all medical teaching and research into an online endeavor and how that has impacted faculty, administrators and students. Graduating medical students suddenly found they weren’t traveling to residency interviews – these, too, would be conducted online – and UB’s program directors had to quickly pivot as well.

And while the world was responding to the devastation of COVID-19, the racial disparities the disease uncovered became all that much more apparent with the murder of Floyd.

UB’s medical students of color recount their experiences and reactions, starting with last year’s “White Coats 4 Black Lives” march, and how they are working with the medical school to foster change in the foundations of medical education.

The voices that come through in the magazine cover an extraordinarily broad range of topics and opinions, but in the end, the true power of the Jacobs School is revealed in the quality of care it provides for its patients. The magazine includes several stories about the personal relationships and connections that patients and their families have established with Jacobs School researchers.

One tells the story of Hudson McKeefery, a little boy born in England with a rare mitochondrial disorder called FDXR. His physician found a scientific paper about the rare disorder and shared it with his parents; the author, one of very few in the world studying the disease, is Taosheng Huang, M.D., Ph.D., chief of the division of genetics in the department of pediatrics in the Jacobs School.

Just before the pandemic, the McKeefery family flew to the U.S. from the U.K., eager to find out as much as they could in order to help Hudson. Feeling heartened and hopeful by their connection with Huang, the McKeeferys donated $1 million to Huang’s research effort at the Jacobs School to continue his research and to start patient registries for this rare disorder. Referring to Huang, the family noted: “He is our main source of hope.”

Other stories outline the philanthropic efforts of patients and their families that have been affected by Jacobs School faculty who are improving the lives of patients and families living with diseases ranging from multiple sclerosis and hemophilia to mental health issues and retinitis pigmentosa, which can cause blindness in children.

The magazine ends with a riveting black-and-white photo portfolio of Jacobs School faculty and students serving on the front lines of the pandemic. One of the last pieces in the magazine is a remembrance of Adeline “Addie” Fagan, Class of 2019, who died last year from complications of COVID-19. She had just begun her residency in obstetrics and gynecology. She was 28 years old.

“The Jacobs School has also been a consistent voice for the public health in our community,” Cain said in his Q&A in the magazine. “We are an institution that advocates strongly for advancing public health measures at the local, state and federal levels of government and through businesses and community outreach. We are champions of public health and, as a school, we have done – and will continue to do – everything we can to educate the public in a timely way about best practices in health and well-being.”