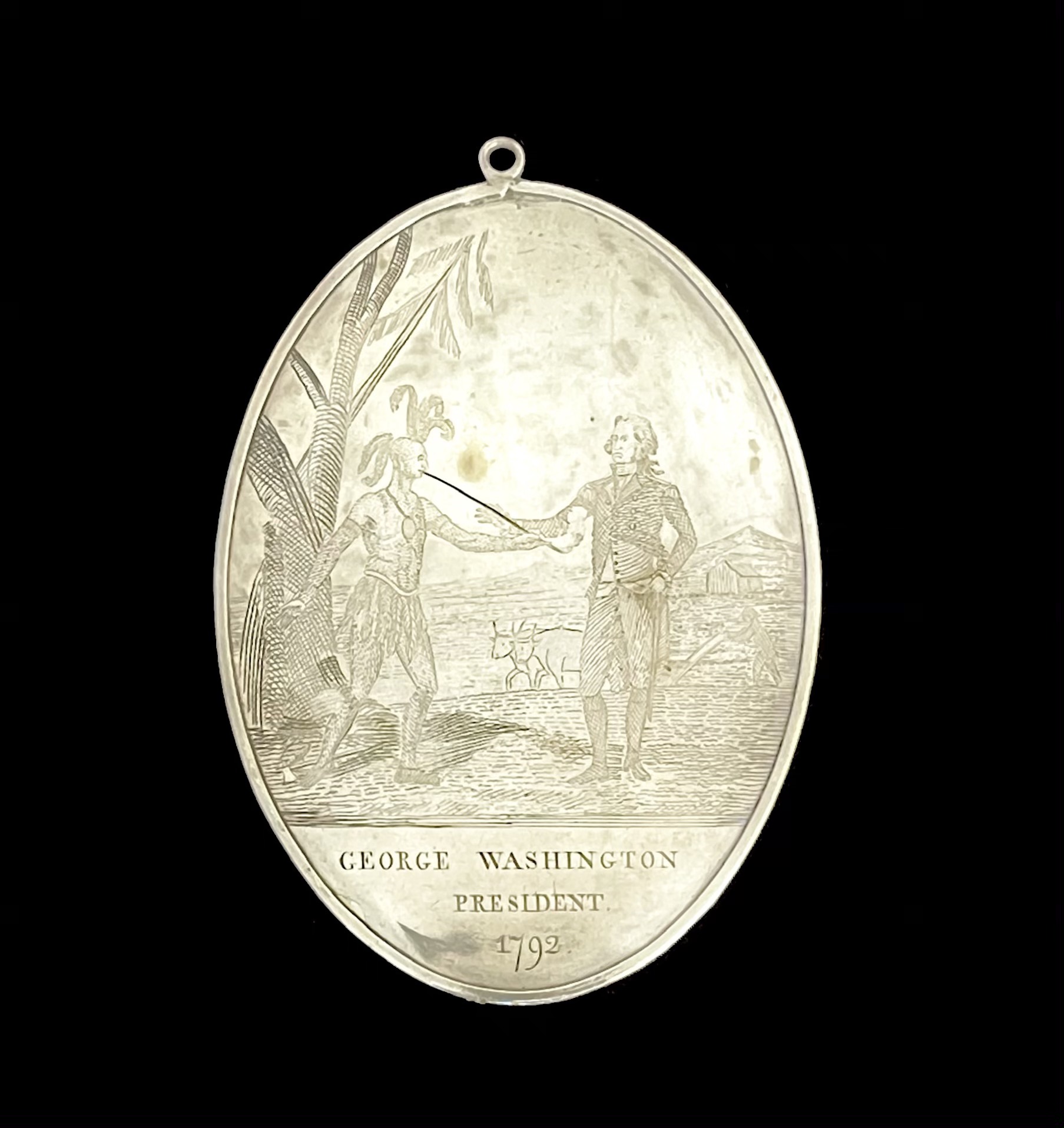 The Red Jacket Peace Medal, an object of cultural patrimony under federal law, has been returned to its rightful home with the Seneca Nation by The Buffalo History Museum.

The medal is of central importance to the Nation and was gifted Seneca Chief Red Jacket by President George Washington in 1792 to commemorate discussions that culminated in the Treaty of Canandaigua of 1794, in which the Seneca Nation played a crucial role. The medal is a symbol of peace, friendship and enduring relationships among the U.S. and the Six Nations.

“It is both fitting and gratifying to have the Red Jacket Peace Medal back with the Nation where it belongs,” Seneca Nation President Matthew Pagels said. “An untold number of artifacts that are of cultural significance to our people – and all Indigenous communities across the U.S. – remain in the hands of private or public collections. The return of the Peace Medal underscores the need for more of these important objects to be returned to their rightful place.”

A press release stated, “The Native American Graves Protection and Repatriation Act (NAGPRA) defines cultural patrimony as objects with ongoing cultural importance to a tribal nation, rather than property owned by an individual. The Red Jacket Peace Medal fits this description and, as such, cannot belong to any individual or museum; it is inalienable and belongs to the Seneca People as a collective.”

The Seneca Nation submitted a formal request for the repatriation of the Red Jacket Peace Medal in October 2020, and it was returned early this month.

The Peace Medal stayed with Red Jacket for the remainder of his life after he received if from Washington, and he reportedly wore it every day. Upon Red Jacket’s death in 1833, the medal was passed down to his nephew, Jemmy Johnson, who wanted to sell it to the New York Museum in 1851. However, the sale was intercepted by another descendent, Col. Ely Parker.

While in Parker’s possession, the medal passed through the hands of several prominent individuals – including President Abraham Lincoln, who reportedly held the medal the day before his assassination. Parker kept the medal until his death in 1895, when it was sold that same year by Parker’s widow to the Buffalo Historical Society (now The Buffalo History Museum).

A press release stated, “The reality is that no individual can own an object of cultural patrimony. Though the Seneca Nation understands Ms. Parker’s intention, it believes she was not authorized to sell the heirloom.

“The museum has served as a steward of the medal and sustained popular interest in it, Red Jacket, and all Seneca communities for more than a century.”

Dr. Joe Stahlman, director of the Seneca-Iroquois National Museum, said, “Like the Canandaigua Treaty, the Red Jacket Peace Medal is a representation of the ongoing sovereign relationship between the federal government and the Seneca People. It has always maintained an inviolable place in our cultural memory.”

Melissa Brown, executive director of The Buffalo History Museum, said, “As a steward of local history, The Buffalo History Museum must look back at its own history, reassess its collections and the circumstances surrounding artifact acquisition. Reassessment is not enough, however, action is imperative to ensure that any artifacts of cultural patrimony are returned – in this instance, to the collective stewardship of the Seneca people. I, and all of the museum, were committed to repatriation of the Peace Medal. Through our continued relationship, we seek to ensure the legacy of Red Jacket and the history of the Haudenosaunee, reinforcing connections to the vibrancy of the Nation that shapes our community today.”

New York State Sen. Sean Ryan said, "I applaud The Buffalo History Museum for their decisive action to return the Red Jacket Peace Medal to its rightful owners, the people of the Seneca Nation. The repatriation of Indigenous artifacts is an important process in building strong, meaningful and peaceful relationships between Native American territories and their surrounding communities. The return of the Peace Medal – an explicit symbol of this relationship – is an especially significant act, and a momentous occasion here in Western New York.”

The Peace Medal is now being held at the Onohsagwë:dé Cultural Center in Salamanca. It will be available for public viewing soon. A public unveiling event is tentatively planned for May 17; details will be released in the days to come.