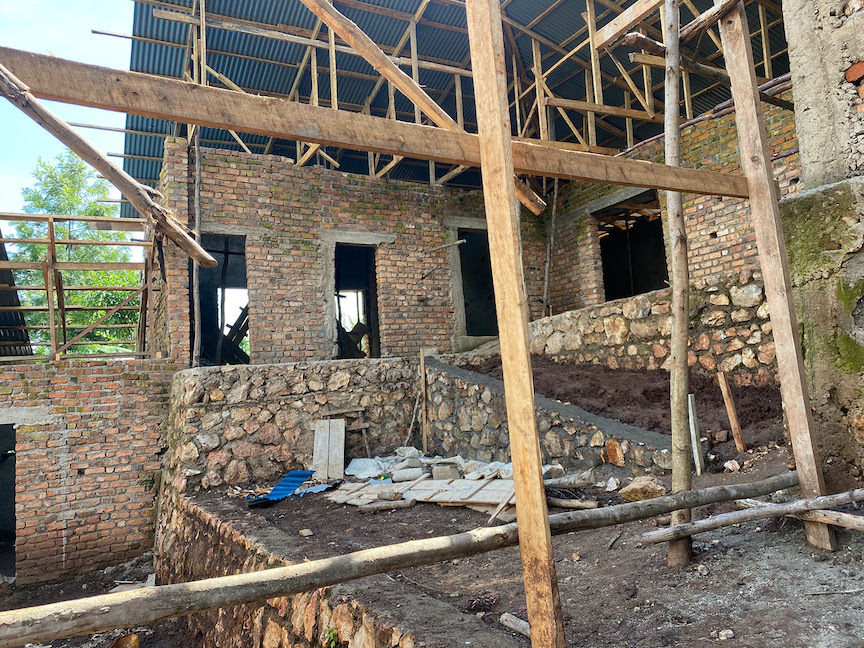 Construction is nearing completion on this facility in the Democratic Republic of the Congo that will serve as an administrative and training space for CPNCK, a coffee cooperative in the Lake Kivu region of the DRC. (Image courtesy of the University at Buffalo)

Construction nears completion on inclusive coffee facility in the Congo

UB architects, Polus Center behind project that could create significant change across coffee industry, and economic opportunities for landmine survivors, people with disabilities

Construction is nearing completion on a specialty coffee facility in the Democratic Republic of the Congo that is expected to infuse vital new economic opportunities around one of the world’s most coveted agricultural commodities, while potentially being replicated in other coffee-producing parts of the world.

The project – situated on Idjwi Island in the Lake Kivu region of the DRC – is being led by University at Buffalo architects and experts in inclusive design, and the Massachusetts-based Polus Center for Social & Economic Development.

Construction began in May 2020, and local crews are putting the finishing touches on the structure, which will serve as an administrative building for CPNCK, a coffee cooperative. Importantly, the building also will provide training space and a station for cupping, the quality-control process in which trained testers note the tastes and aromas of the coffee beans.

“We’re enthusiastic for what this collaboration will do for the region,” says Korydon Smith, professor and chair of architecture in UB’s School of Architecture and Planning.

“The training center will bolster coffee quality in the region while providing conflict survivors, women and people with disabilities access to coffee-sector employment,” adds Smith, who is also one of the co-founders of UB’s Community for Global Health Equity.

The DRC is seeing a revival of its coffee industry, and the Lake Kivu region is an ideal area for growing high-quality coffee beans, which could then be sold at a higher profit, because of its altitude and ample rainfall.

But farmers and coffee workers there face hidden dangers in the form of explosives and remnants of war that lurk where coffee beans are cultivated. Landmines have left many locals with injuries that make it difficult to maintain or find employment, in turn devastating the lives of the workers and their families and communities.

“The construction of the training center and cupping lab not only creates social and economic opportunities for landmine survivors and people with disabilities, it raises awareness about the value and benefits of diversity within a broader community context,” Polus Center Executive Director Michael Lundquist says.

“It is landmine survivors and people with disabilities that brought the Polus Center and UB to Idjwi Island,” he adds. “This calling has created many collective benefits for the 220,000 people who reside on Idjwi.”

The Polus Center sought out UB’s Smith for the project because of his expertise working on inclusive design in global contexts.

Another key project collaborator is Stephanie Cramer, a clinical assistant professor of architecture at UB, who was instrumental in the design of the new facility and who has also done design and construction in international contexts.

Each aspect of the building was designed to make it easier for workers with a disability – such as a visual impairment or the loss of a limb – to perform their assigned duties.

The project is significant for the Lake Kivu area because it’s an emerging coffee-producing region.

“Increasing the production and quality of the island’s specialty coffee will significantly raise income levels for coffee farmers and those working throughout the coffee value chain,” Lundquist says. “In other words, people in devalued status are directly responsible for bringing hope and economic prosperity to everyone on Idjwi. This is what makes the project unique.”

The project has the potential to create major change throughout the coffee industry.

“The change that this project is going to bring is not going to be measured only in the Idjwi community,” says Adrien Nzuzi, Polus Center’s DRC project manager. “It should and will be spread, and will serve as an example for future projects of this nature, aiming to include as many people as possible in the positive changes in communities.”

The UB team has been working with the Coffee Quality Institute – the organization that sets global standards – to create a new set of architectural-design standards for coffee facilities that accommodate people with disabilities.

They’re also developing a pattern of architectural prototypes based on the DRC facility that could be replicated in other coffee-producing countries affected by conflict, such as Colombia, Nicaragua or Cambodia.