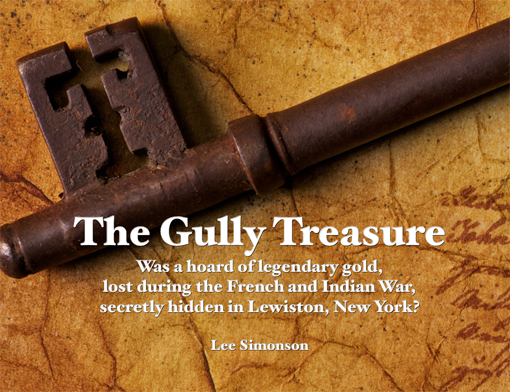 New HAL book asks, 'Is there hidden treasure at Artpark?'

The Historical Association of Lewiston has published a new hardcover book titled “The Gully Treasure." The book details several aspects of treasure lost during the French and Indian War and how it may have ended up in Lewiston. It was written by local author Lee Simonson and is formatted as a letter to his grandson.

“It started out as historical fiction but, as more research and facts came to light, the stronger the possibilities became there is hidden treasure here,” Simonson said. “Add to that the revelation there is a secret tunnel near Artpark, and things started to come together.

“The reason we can’t find more solid leads is because corruption was rampant within the French forces at the time and a lot of the bounty just disappeared. The question is where did it go? Lewiston, and the Artpark gully area in particular, provides one of the most plausible locations.”

The book examines the history and background of the area in the 1700s when the French controlled the region. Several treasures were lost but no one knows where they are – with the possible exception of one being discovered in 1882 in Pennsylvania. There are also reports of lost treasure off the shore of Grand Island in Burnt Ship Bay.

"This is a new and intriguing look at all the possibilities," Historical Association President Ken Slaugenhoupt said. "It's a beautiful 8-1/2-by-11-inch book that is sure to be an eye-opener for many people – especially local residents who have walked by the Artpark gully without ever realizing it was there. As one of the most historic landmarks in North America, this will shine a new light on the area for everyone from adventure seekers to those who love the Artpark area and are interested in learning more about its fascinating history. It will certainly raise some interesting conversations, even if the book is just sitting on the coffee table.”

Copies of the book, which will make a unique gift, cost $30, including sales tax, and are available by calling the Lewiston Museum at 716-754-4214 or going online to the museum store at historiclewiston.org. Locals can pick it up at the museum, while out-of-towners can have it shipped out for an extra charge. Only 100 books are currently available.

Slaugenhoupt said the book is being released not only as a fundraiser but to also detail the area’s fascinating history.

"The French and Indian War is confusing, but this lays it out in a simple and straight forward way that enables everyone to understand and appreciate the important role our area played,” he said. “This is the perfect gift for anyone in the family who has an Indiana Jones sense of adventure, a curiosity about the unknown, and enjoys local history. Few people realize that what happened here in the 1700s shaped the future of North America. Is there treasure here? I hope so, but only time will tell.”