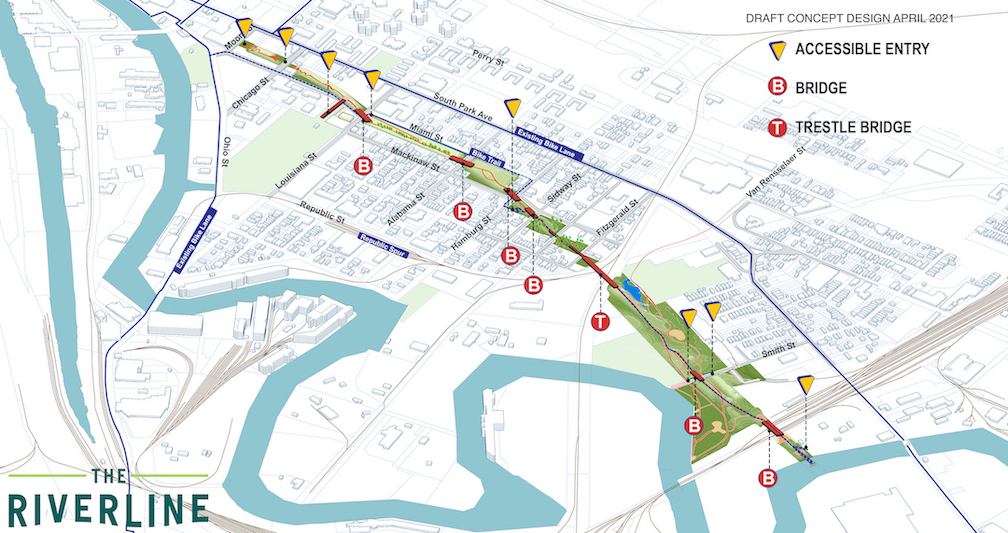 The Riverline is coming into focus with a design concept now emerging.

The Western New York Land Conservancy and its award-winning design partners W Architecture, Hood Design Studio and Green Shield Ecology are at the midpoint of a community-centered conceptual design process. They will present their first draft of the design concept at a public event livestreamed through YouTube at 7 p.m. Wednesday, April 28. To register and get a YouTube link for this free event, visit wnylc.org/firstlook.

Building on four years of engagement, as well as community feedback from February’s initial concept designs, plans for The Riverline are taking shape as a place of refuge where nature has reclaimed this former rail corridor. The Riverline is a proposed nature trail and greenway that stretches along an unused railroad corridor from Canalside at the DL&W Terminal in downtown Buffalo to the Buffalo River across from Riverbend and Tesla. Along the one-and-a-half-mile stretch, the design team has also identified locations to introduce gardens and nature-based recreation to reflect the community’s vision for this green connector from downtown Buffalo to the Buffalo River.

Together, a press release stated, “these draft designs create a continuous pathway and different opportunities for immersive experiences in nature as well as community gathering places. They complement the revitalization of Buffalo’s waterfront and fuse this momentum with the history and character of the Old First Ward, Perry and Valley neighborhoods.”

The design concept remains in draft form, and additional public input is needed. For those who are unable to attend the live public event, feedback cards will be placed at select locations around the Old First Ward, Perry and Valley neighborhoods in the days following the event. Following the event, a version of the designs will be available at wnylc.org/firstlook, as will a link to the recorded presentation. 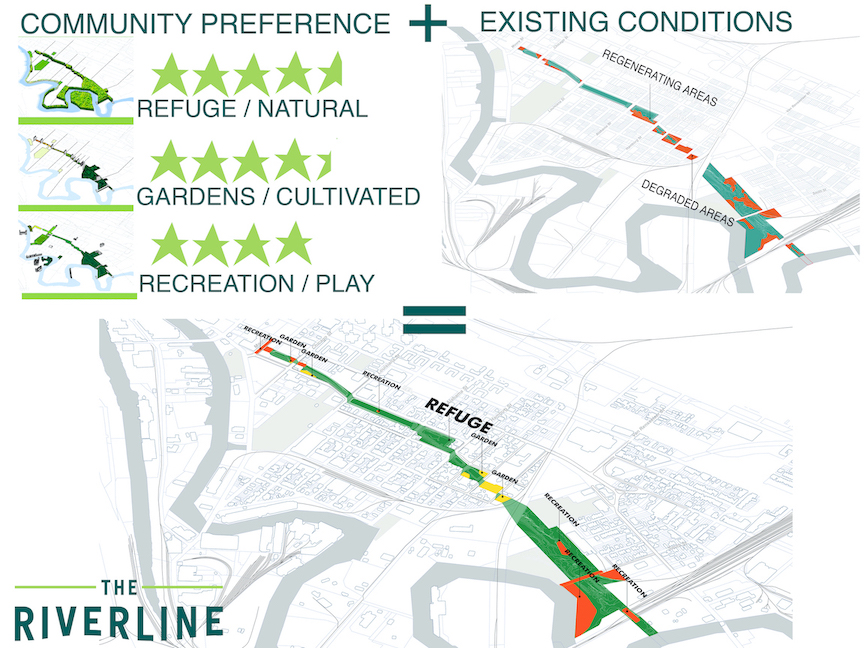 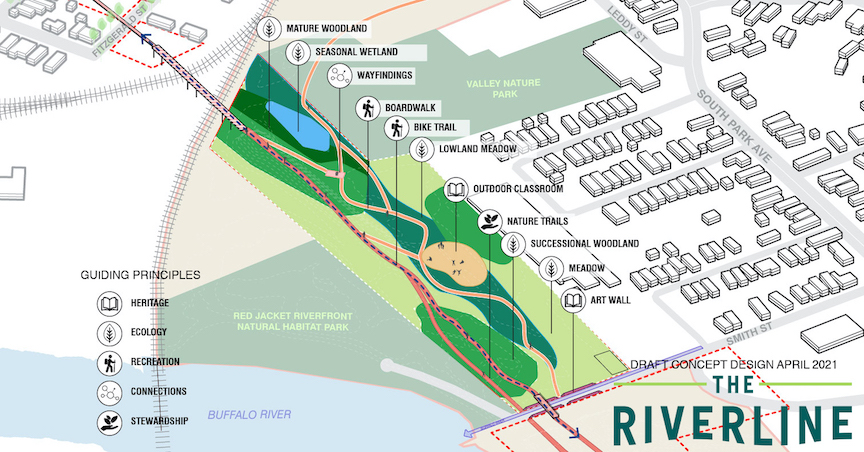 Congressman Brian Higgins said, “The Riverline is shaping up to be an important unifying element on Buffalo’s waterfront. Once completed, it will connect people and neighborhoods to nature and the waterfront. It will also connect the city’s rich industrial heritage to its green, environmentally friendly future. We look forward to reviewing these new draft designs with an eye toward keeping the momentum moving forward.”

New York State Sen. Tim Kennedy said, “In the early 20th century, Buffalo was one of the largest cities in the United States, with its growth fueled by industry and railroads. Our future landscape must embrace our city’s past and incorporate the important foundation it was built upon. Today, projects like The Riverline are revitalizing downtown and restoring public access to our waterways, in turn creating recreational spaces where people want to spend time together and explore the rich culture and greenspace that Buffalo offers."

Land Conservancy Executive Director Nancy Smith said, “Our community’s input is driving the big picture and the small details for The Riverline. We believe the design team has distilled the essence of four years of listening and is ready to offer a first look at a design that will weave together places, programs and opportunities. We welcome community input and involvement now with one important question in mind: ‘Does this design reflect your vision for The Riverline?’ ”

Barbara Wilks, founder and principal of W Architecture and Landscape Architecture, added, “Thanks to the public input we’ve already received, we’ve learned what excites Western New Yorkers about The Riverline. Community feedback is invaluable to our process. We are looking forward to sharing our draft designs with the community, getting additional input, and unveiling our final concept design this summer.”

The DL&W corridor is owned by the Niagara Frontier Transportation Authority (NFTA), which has been a key partner in supporting project planning and design work. The Riverline will include walking and bicycling, plus winter activities such as snowshoeing and sledding. It will connect to parks and paddleboat launches along the Buffalo River, and it will connect to trails that go to Canalside and the Outer Harbor, as well as the Larkin District and beyond.

The press release added, “By transforming the unused railroad corridor into The Riverline, the project will provide a model for how to connect people to nature right in the heart of the city.

“The design for The Riverline is being developed in collaboration with neighborhood groups, many project partners, and ongoing community feedback. Once completed, The Riverline will be a vibrant, safe and welcoming space for people of all ages, abilities and backgrounds to connect with each other, with nature, and with the waterfront. The Riverline will be an inspiring community gathering place alive with the history and voice of the surrounding Old First Ward, Perry and Valley neighborhoods.”

Funding for the concept and schematic design phase comes in part through an Environmental Protection Fund grant (EPF No. 180842) administered by the New York State Office of Parks, Recreation and Historic Preservation. Additional funding is provided by BlueCross BlueShield of Western New York Blue Fund; The First Niagara Foundation in partnership with KeyBank; Moog Inc.; an Erie Canalway IMPACT grant awarded by the Erie Canalway Heritage Fund funded in part through the support of the Erie Canalway National Heritage Corridor; Kathy Lasher and Scott Bieler; Peggy and Jay Elliott; Nancy and Tom Smith; and other individual community donors. The Land Conservancy continues to seek additional funding for The Riverline.

Those interested in learning more about this project, or donating to create The Riverline, can visit the new website for The Riverline: theriverline.com. They also can reach out to the Land Conservancy at 716-687-1225 or [email protected].

The Western New York Land Conservancy is a regional, not-for-profit land trust that permanently protects land with significant conservation value in Western New York for current and future generations. It envisions a future in which open spaces, working lands, wildlife habitat and scenic beauty are cherished and protected as part of the landscape and character of Western New York. The Land Conservancy is accredited by the Land Trust Accreditation Commission and is one of 1,000-plus land trusts nationwide, including 87 in New York. Land trusts have protected more than 56 million acres of land. To learn more, visit wnylc.org.