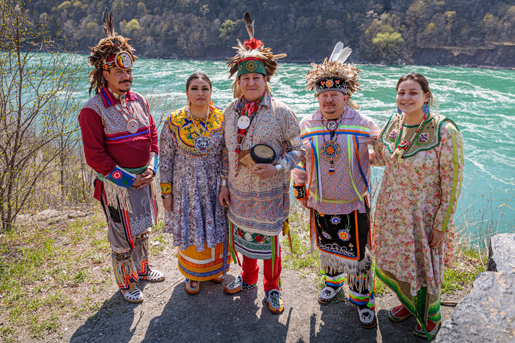 A Haudenosaunee observance of Earth Day at Artpark in Lewiston. (Photo by Jordan Oscar)

Spring awakens at Artpark, where Mother Earth is celebrated

This Earth Day, Artpark turned to members of the Six Nations Confederacy for lessons on how to live in harmony with Mother Earth – something the Six Nations has done for millennia.

Amid intermittent showers and bursts of sunshine, a Haudenosaunee family of well-known performers got together on the Artpark trail to recite the Ohen:ton Karihwatehkwen, or thanksgiving address. They also performed social songs and dance as part of an ancient tradition celebrating their deep connection to – and respect for – the natural and spiritual world.

The celebration was curated by Michele-Elise Burnett, an Ontario resident who is director of Kakekalanicks Inc., Artpark indigenous arts producer and Métis/Algonquin Bear Clan. Burnett said the thanksgiving address is meant to teach mutual respect, love, generosity and an understanding that what is done to one part of the web of life we do to ourselves, too.

“We are in a critical time right now with environmental challenges such as accelerated extinction of species, extreme weather events, glacier melt, sea waters rise,” Burnett said. “Earth Day and every day should rightfully focus on living in harmony, peace and respect with one another and all living things.”

The Haudenosaunee (also known as the Iroquois) often recite the Ohen:ton Karihwatehkwen to commemorate milestones such as birthdays and graduations. Jordan Smith – who along with his wife, Kehala Greene Smith, and daughter, Mackenzie-Mae, led the day’s recitations and dances – said the prayers not only communicate spiritual wisdom, but also teach practical life lessons.

Just after the event began, rain clouds gathered and the wind picked up, forcing a camera and sound crew to briefly halt the proceedings. Haudenosaunee member and Smith family cousin Heath Hill quipped, “We stopped because the wind told us to!” eliciting chuckles and broad smiles from some onlookers assembled. 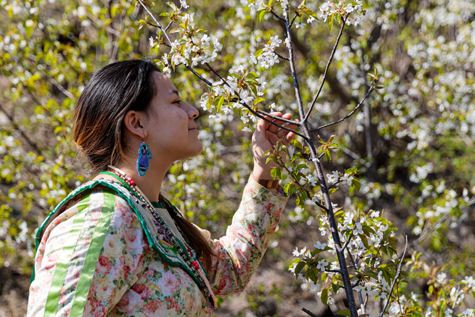 After the recitals resumed – first in Mohawk, then in English (Mackenzie-Mae Smith would later recite the closing prayer in her native tongue, Tuscarora) – the group of two women and three men danced, their decorative costumes glistening in the now-bright sunshine and their feathery headdresses flowing in the soft breeze. As the Niagara’s verdant waters churned below and red-tailed hawks soared above, they moved in a tight circle, tapping moccasin-clad feet and chanting and singing in honor of the robin – a bird they revere for letting them know “spring is on its way.” Later, they mimed rowing as they did the Canoe Dance in praise of their people’s primary means of transportation down that roiling green river for generations.

Burnett summed up the days’ activities this way: “We come together in this circle to celebrate and honor Mother Earth, and to show her our love and gratitude for all the life sustaining gifts she provides us.

A video recording of the celebration is available here.

Starting in mid-May, Artpark visitors will be able to download a series of interactive audio experiences developed by Artpark for this summer where, among other things, they can experience the Haudenosaunee’s thanksgiving address in Mohawk and English, while walking the picturesque and historic Niagara trail.

Artpark is planning a full summer season of diverse programming. More information will be available soon. Visit www.artpark.net for more information on upcoming events and activities.