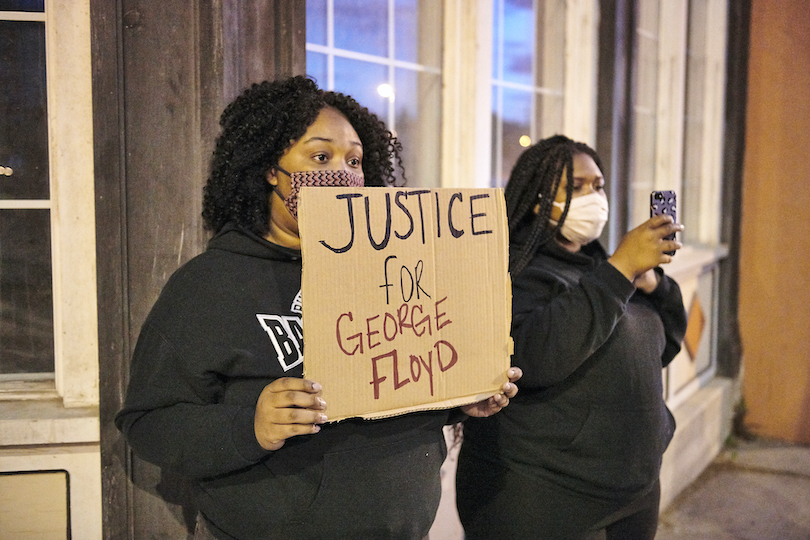 Dozens of people showed up Sunday, May 31, 2020, in different parts of Niagara Falls to peacefully protest the untimely death of George Floyd. (File photos by Mark Williams Jr.)

In response, Gov. Andrew Cuomo said, "The verdicts delivered today were a powerful statement of accountability. George Floyd's family and his loved ones got well-deserved closure, and all of us who deeply and personally felt his loss gained hope in the possibility of progress.

"But while I'm grateful that the jury returned these verdicts, accountability is not the same as justice. It doesn't make an unacceptable situation acceptable, and it doesn't bring Gianna's dad back. But it must fuel our continued march towards equity.

"Emmett Till. Medgar Evers. Rodney King. Amadou Diallo. Sean Bell. Trayvon Martin. Eric Garner. Michael Brown. Philando Castile. Ahmaud Arbery. Breonna Taylor. George Floyd. Daunte Wright. Adam Toledo. Our country has never fully lived up to its founding ideal, of liberty and justice for all. Still, our greatest attribute has always been our optimism, our belief in an ever better future, our faith in the strength of humanity.

"We saw that faith in streets across the country last summer and over the last 11 months. Our charge now is to channel our grief, our anger, our righteous energy, and make real, positive and long-overdue change happen."

Assembly Speaker Carl Heastie said, “George Floyd’s murder was a tragedy. It was a crime that the entire world witnessed on video over the course of nine minutes and 29 seconds. That Derek Chauvin was found guilty on all counts is important and it is right. But I also know we must continue to challenge the system that enabled his murder in the first place.

“George Floyd’s death was a turning point. Across our state, our country and indeed the world, people took to the streets to say no more to the systemic racism that costs the lives of our friends and neighbors. To say that those with power and authority must be held responsible for their actions. To demand that we rebalance the tilted scales of justice in our country. To say that Black Lives Matter.

“This verdict is a victory, but we cannot forget that George Floyd was more than a rallying call for a reckoning in our justice system – he was a man. He was a father and a brother, and his family will always feel his loss. They have endured this terrible tragedy with grace and dignity. My heart goes out to George Floyd’s friends and family. I hope this brings them a sense of justice, and that they can find strength and peace. 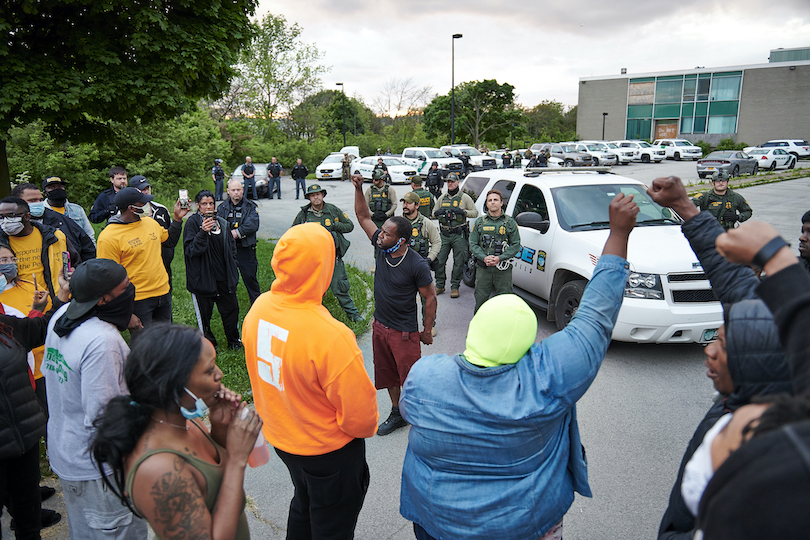 Dozens of people showed up Sunday, May 31, 2020, in different parts of Niagara Falls to peacefully protest the untimely death of George Floyd. (File photos by Mark Williams Jr.)

New York Attorney General Letitia James said, “Almost one year ago, the Floyd family and communities across this nation were torn apart by the murder of George Floyd. We all watched in helpless desperation as a man was mercilessly killed by the knee of a police officer. Today, there is finally accountability for this atrocious crime that stole the life of a father, brother, son and friend. I pray that the Floyd family finds some semblance of justice and peace for this horribly unjust act. While true justice will never be served as long as Black men and women are subjected to such inequality, today, we are one step closer to a fairer system.”

Buffalo Catholic Diocese Bishop Michael W. Fisher said, “Today’s verdict of accountability in the tragic killing of George Floyd is an important step in healing the deep wounds of racial tension caused by his senseless killing. The agonizing images of his confrontation with those sworn to protect and serve, and the final moments of life, will forever challenge us and must always compel us to create a more compassionate and just society, where all enjoy equal rights and protections under the law. I implore all who wish to demonstrate to do so peacefully and in ways that lead to greater understanding, dialogue and meaningful change. We pray for the family and community of George Floyd that our loving and compassionate God will ease their pain and provide them comfort.”

University at Buffalo President Satish K. Tripathi said, “A few moments ago, we all learned the verdict in the Derek Chauvin trial. This landmark trial has been viewed as a referendum on police accountability and brutality against Black and brown Americans – and, as such, it has been closely followed by millions of people demanding the abiding structural change that is long-overdue in our country.

“Of course, the deep-seated hurt, sadness and anger that George Floyd’s murder evoked cannot be wiped away with the reading of a guilty verdict. It is my ardent hope that, as we pause and reflect on the verdict, we consider how we can transform this moment in our collective history into a turning point for genuine reconciliation and change: change in our hearts, our minds, our practices, our systems.

“As I have said before, we at UB can actively contribute to transformative change through our mission and its expression in our education, our research, scholarship and creative activities, and our engagement with one another and the many communities we serve.

“Together, as a university community, we must continue working toward the ideals of social justice, recognizing that achieving them will lead to a brighter future for those who have been marginalized and disenfranchised throughout our country’s history – and for our nation as a whole.”

Floyd died May 25, 2020, while in Chauvin’s custody. The former police officer was seen on video with his knee pinned against Floyd’s neck for between eight minutes and 46 seconds and more than nine-and-a-half minutes.

Chauvin pursued Floyd upon reports a counterfeit $20 bill was used to make a purchase. His attorney, Eric Nelson, argued Floyd’s death was the result of drug-induced stress to the heart.