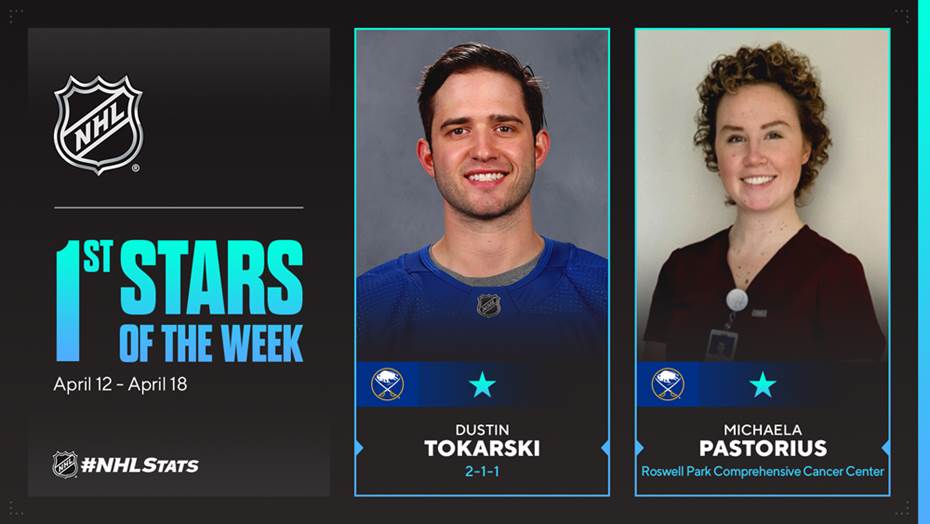 (Image courtesy of the NHL)

Throughout the 2020-21 season, “The NHL is celebrating the remarkable efforts of the off-ice stars who make it possible for us to play our games amid a pandemic by honoring frontline health care heroes from the regions represented by the league’s weekly and monthly ‘Stars.’ ”

Pastorius works as a nurse at Buffalo’s Roswell Park Comprehensive Cancer Center, where just a few years ago she was walking the same halls as a patient battling a cancer diagnosis. Pastorius put nursing school on hold while going through treatment, but vowed to finish her degree and now works alongside the nurses who once cared for her as a patient.

The inpatient unit at Roswell Park where Pastorius works – known as 6West – is typically for cancer patients with solid tumors, but has become a designated COVID-19 space over the past year. Pastorius understands what these patients are going through and brings a positive attitude to the floor despite the incredibly challenging and emotional experience of the pandemic on both patients and staff.

“When I was going through inpatient chemotherapy at Roswell Park, the Buffalo Sabres gave me motivation to continue fighting,” Pastorius said. “The amount of support the Sabres show for Roswell and its patients felt personal to me since I am such a big fan. … The appreciation I had and still have for their support is bottomless.”

Tokarski made a league-best 128 saves on 137 shots, compiling a 2.27 goals-against average and .934 save percentage to help the Sabres (12-26-7, 31 points) go 2-1-1 versus three of the top four teams in the MassMutual NHL East Division. He turned aside 29 shots in a 3-2 shootout loss to the Boston Bruins April 13. Tokarski then recorded 27 saves for his first NHL victory since Dec. 12, 2015 (with Montreal) – and first win since his father passed away in 2017 – in a 5-2 triumph over the Washington Capitals on April 15. He finished the week with a pair of starts against the Pittsburgh Penguins, making 38 saves in a 3-2 loss April 17 followed by 34 stops in a 4-2 victory April 18. The 31-year-old native of Watson, Saskatoon, who last appeared in the NHL in 2016-17 (with Anaheim) prior to signing with Buffalo in November – has played in nine games this season, posting a 2-5-2 record with a 3.15 goals-against average and .914 save percentage.