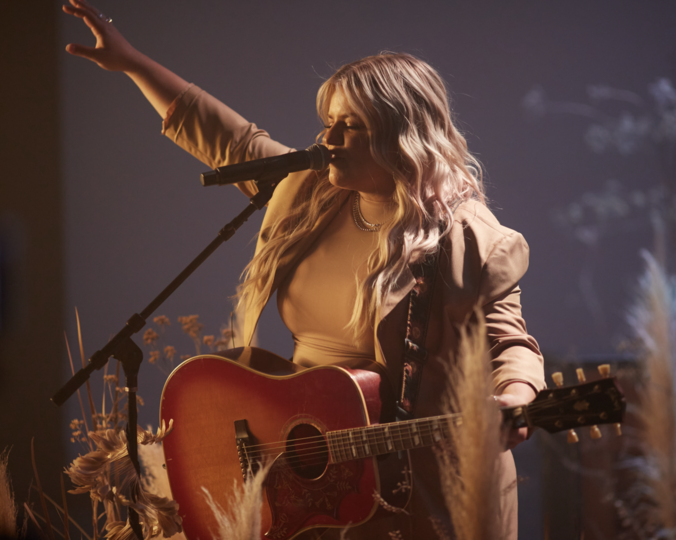 Project releases May 21; preorder is live today with instant grat

Anna Golden, an emerging worship artist and songwriter, announced her debut project, “Peace: The Album,” will release May 21. With its preorder beginning today, her song "Doubt" is offered as an instant grat. A live performance video for the track also drops today and can be viewed below.

At only 24 and with her debut album ready to impact the world, the music scene is not a new one for Golden. She began her career as a showbiz kid, the youngest of four talented siblings. Her childhood was spent in Los Angeles audition rooms, earning consistent work with mainstream entertainment outlets, including Radio Disney.

“My siblings – John, Liz and Josh – are involved in mainstream music or acting,” Golden said. “I started in the mainstream also, but at 15 I remember having a moment with my parents where I told them the attention was too much pressure for me.”

That conversation led her to her passion – worship ministry.

“I loved leading worship, because none of the attention was on me,” Golden said. “All the glory is directed to God.”

Becoming a member of her church's youth worship team, Golden began leading worship and, by 18, she was in charge. She started recording and releasing her own worship songs independently, which led her to an unexpected opportunity with Tasha Cobbs Leonard in 2017. Cobbs Leonard invited her to sing on her album. Soon after, Golden ended up becoming a background vocalist and serving alongside Cobbs Leonard in her local church.

“A major part of my assignment is to be a bridge, connecting people from all cultures and experiences through worship by bringing awareness to the presence of God,” Cobbs Leonard said. “Anna Golden is a testament to that calling and is a relevant, necessary voice to this generation. Her influence has already crossed barriers and built bridges culturally and I expect her impact to be explosive quickly. I’m excited to play a role in introducing her music and ministry to the world through TeeLee Records.”

In March 2020, Golden caught the internet’s attention when she – joined by sister Liz Golden and pop superstar Selena Gomez – uploaded a stripped-down cover of the worship anthem “The Blessing” to Instagram, while in self-isolation in Los Angeles. It instantly gained massive attention and helped launch her song “Peace” to critical and consumer acclaim.

Starting as a private expression from her own experiences, “Peace” quickly turned to a musical balm that she knew would speak to the waves of anxiety and depression of so many. At press time, the song has already amassed 4.4 million global streams LTD.

“Peace: The Album” is a 16-track project featuring two sides – one live, one studio – showcasing Golden’s versatility as she weaves congregational worship to her refreshing new take on worship music.

Golden is at the forefront of a new wave of artists who are redefining the sound and style of worship music, both inside and outside of the church.

To find out more, visit AnnaGoldenOfficial.com.