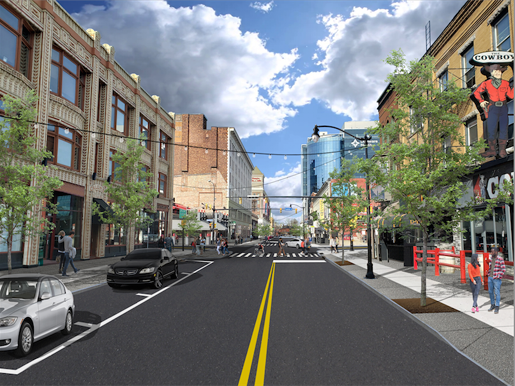 An artist's rendering of the future Buffalo entertainment district. (Image courtesy of the Office of City of Buffalo Mayor Byron W. Brown)

Mayor Byron Brown recently announced the City of Buffalo would make $8 million in infrastructure improvements along key corridors of the downtown entertainment district. Major street, sidewalk and streetscape upgrades will be made on Chippewa, Franklin and Court streets.

“These upgrades include repaving, complete sidewalk replacement and new curbing, as well as new city-owned LED street lighting, benches, plantings and other amenities,” he said. “The goal is to make the downtown entertainment district a more attractive, friendly and engaging place to be.”

Work is slated to kick-off Monday, April 5, on Chippewa, between South Elmwood Avenue and Franklin. Improvements along Chippewa will include expanded sidewalks and special catenary lighting to accommodate increased outdoor activity along the downtown hotspot.

“When the COVID-19 pandemic began, we worked with entertainment district business owners to create a safe outdoor space on Chippewa Street that was extremely popular and kept many businesses open at a time when only outdoor and takeout food and drink was allowed,” Brown said. “As we transition out of pandemic life, we want to create a space that continues to support increased outdoor activities.”

Buffalo Department of Public Works Commissioner Michael Finn, P.E., said this project is the first announcement of many for the 2021 construction season: “The 2021 construction season will be a busy one for the City of Buffalo. In addition to this work for the entertainment district, work to replace the cables on the Michigan Street lift bridge and prep work for the paving of Main Street, from Ferry to Delavan, has already begun.”

Additional announcements will be made in the coming months, including work in residential neighborhoods in all corners of the city.

Buffalo Urban Development Corp. President Brandye Merriweather said the upgrades advance the city’s “Race For Place” agenda: "Buffalo's ‘Race For Place’ initiative looks to create vibrant, walkable blocks that connect in a cohesive way to create an inviting experience for Buffalo's residents, visitors and our talented workforce, while also supporting our local restaurants, retailers and businesses. This project is one of many that will further enhance Buffalo's sense of place.” 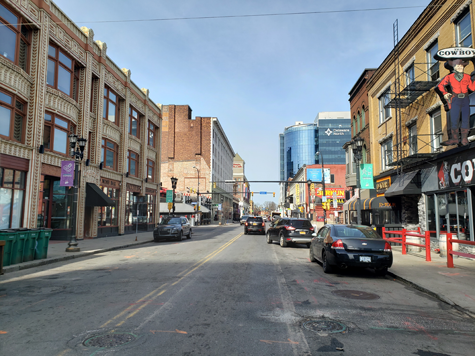 And an artist's rendering of the future Buffalo entertainment district. (Images courtesy of the Office of City of Buffalo Mayor Byron W. Brown)

To accommodate the improvements, Chippewa will be closed to vehicular traffic from South Elmwood to Franklin. Intersections at South Elmwood, Delaware and Franklin will remain open for north-south traffic.

Work on Franklin will start on Monday, April 12, from Court to Huron Street. In addition to
repaving, there will be a full replacement of the signal at the intersection of Franklin and West Mohawk streets.

Two-way vehicular traffic to be maintained in both directions as the contractor will work on one side of the roadway at a time.

Infrastructure work on Court is anticipated to begin once the majority of construction is complete on Chippewa and Franklin, either late this year or in early 2022.