He died at age 83 at home surrounded by his loving family, under the care of Niagara Hospice and his devoted personal aide. He is survived by his beloved wife, Judy (Crowell); and children Cliff (Cathy), Stephen, David (Cheryl), Tara (Joseph), Noelle (Anthony) and Heather. He leaves behind nine grandchildren and five great-grandchildren, all of whom he adored.

Walt was the son of Walter and Gertrude Fuller (Grimes) and the oldest of his six siblings: William, Lawrence (Karen), Gerald (Carol), Evelyn Johnston (Clifford) and (predeceased) Charles (Pat). He was born at home and grew up on the family farm in Johnson’s Creek. Growing up on the farm, Walt was no stranger to hard work, and working on the farm instilled in him a love for being outdoors. Nick, his oldest grandson of whom he was especially proud, inherited his hard work ethic.

Walt’s life centered on his wife and family, his love for them unwavering. He enjoyed family camping trips out west and in the Adirondacks; puttering around the yard planting and gardening with his Judy; and on a large workshop in his barn where you could find him working passionately on any one of his many projects.

A favorite hobby that brought him great joy was making birdhouses with his granddaughter, Judy. They would hang the birdhouses around the yard and spend hours watching the birds. Walt was also active with his son, Cliff, in Cub Scouts and Boy Scouts when Cliff was growing up. He later followed this tradition with his grandson, Garrett, who is working on his Eagle Scout rank doing a project in his grandfather’s honor.

Walt was a master butcher for over 57 years. After working for years for a local meat market, he ventured off and opened Walt’s World of Meat in Tonawanda, then later moved his business to Lewiston where he opened The Natural Link.

Walt knew all of his customers by name and thought of them as friends. He took great pride in his work and thoroughly enjoyed the service he provided. Walt was a long-standing member of Messiah Lutheran Church in Lewiston where he served on the church council and spent years volunteering his time to help maintain the church and its grounds.

A celebration of Walt’s life will be held at 11 a.m. Saturday, May 8 at Messiah Lutheran Church, 915 Oneida St., Lewiston. In lieu of flowers, please make a donation to Niagara Hospice in Walt’s name. 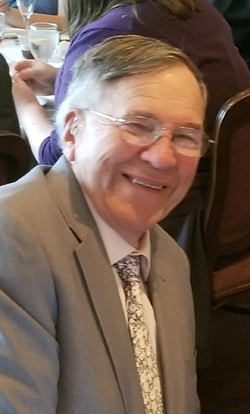