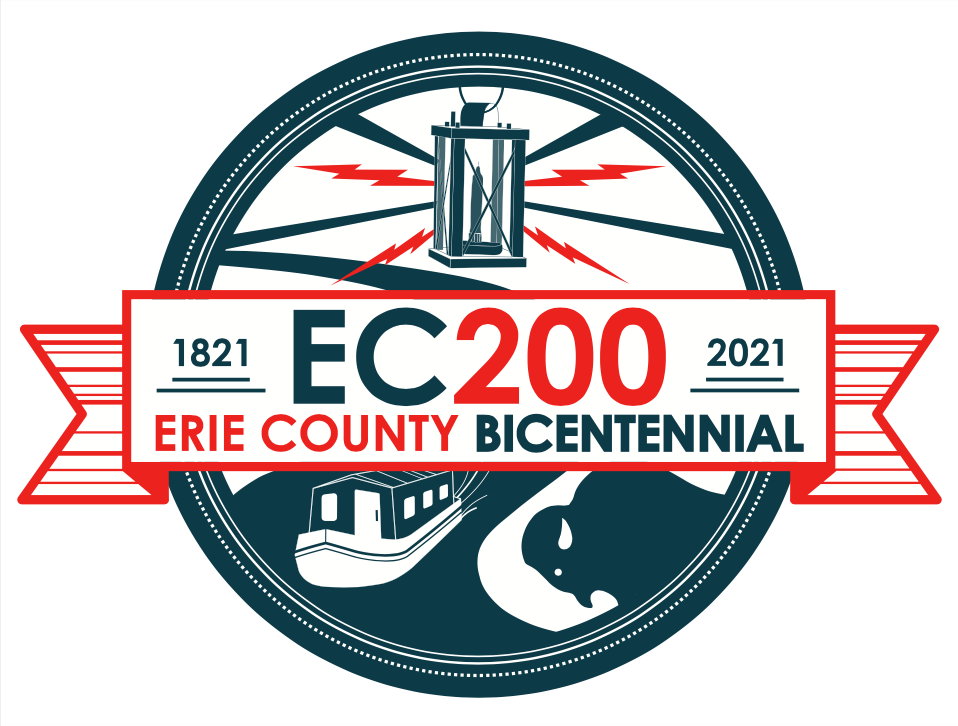 Erie County plans a birthday celebration 200 years in the making

Erie County, in collaboration with numerous partners, is preparing to celebrate its bicentennial with a year of programs, self-guided and group tours, musical performances and museum exhibits. More than 200 partners and volunteers from across the county are taking part in the bicentennial observation, EC200, which will kick off on April 2 (the 200th anniversary of Erie County’s recognition as a county) and will continue for a full year, through April 2022.

“This bicentennial celebration will spotlight Erie County’s history, from its incorporation to today, and will also commemorate the hardworking men and women who built what we know today. A year of education, fun and history is in store and set to begin on April 2,” Erie County Executive Mark Poloncarz said. “I want to thank the many, many partners and community volunteers who are joining in this effort and supporting EC200 by presenting programs or volunteering to help in some way. Throughout Erie County’s history, our people have always been our greatest asset and we are seeing that again with EC200.”

Planning for EC200 began almost two years ago with an organizational effort that included the county executive’s office along with Buffalo History Museum Executive Director Melissa Brown, Erie County Historian Douglas Kohler, and a few dozen local historical, cultural and community stakeholders. The group has since grown to include hundreds of volunteers working on programming, marketing, inclusion and outreach for the year-long bicentennial celebration. Committee work is focused on education, programming, marketing, media/social media, and diversity and inclusion.

Kohler said, “The county's bicentennial commemoration provides us an exciting opportunity to illuminate the little-known stories of our past. Throughout the coming year, we will strive to honor the men and women who, through their contributions and sacrifices, helped to build our community. We will endeavor to commemorate the many moments, like the War of 1812 and the Pan-American Exposition, when the eyes of the world were upon us, and we will celebrate the presidents, the inventors, the businessmen and women and the millions of immigrants who helped to forge our community and county.”

“The 37 Buffalo & Erie County Public Libraries are excited to participate in Erie County’s Bicentennial celebration over the next year,” Library System Director Mary Jean Jakubowski said. “As a key cultural, educational, civic and neighborhood institution, libraries have provided services and resources to local residents since its origins in 1836. And now, during this monumental bicentennial year, the Buffalo & Erie County Public Libraries will be offering a variety of interesting, all-ages opportunities; including a historical map exhibit at the downtown Central Library, for everyone to learn more about Erie County’s first 200 years.

“We are excited for the next 200 years and look forward to continuing library services in our great communities.”

Due to COVID-19, programming is being planned with an understanding of the current restrictions and in alignment with guidelines established by “New York Forward” and ECDOH.

√ An EC200 passport with over 30 historical sites to visit around Erie County;

√ A special bicentennial concert to be recorded by the Buffalo Philharmonic Orchestra for later air;

√ WNED-TV will bring back the “Our Town” series along with other videos of local historical significance to be aired locally for the first time in many years, or ever;

√ Various speaker series and reading events will be held, virtually and in-person when safe; this will include the Erie County Department of Senior Services’ University Express program;

√ Virtual historical story maps will be created by the Erie County Department of Environment and Planning and students at Buffalo State College;

√ An Erie County bicentennial exhibit will be opening at the Buffalo History Museum;

√ Flying Bison Brewery will release “Erie County Parks and Recreation” pilsner, a celebratory brew, with other breweries expected to release their own bicentennial editions;

√ A community calendar of events and bicentennial information will be hosted by Visit Buffalo Niagara;

√ Events highlighting the many ways that local groups celebrate their traditions and holidays;

√ A curriculum is being developed for Erie County students on local history; and

Michelle Urbanczyk, CEO of Explore & More – The Ralph C. Wilson, Jr. Children's Museum, said, “It is a privilege to celebrate Erie County's bicentennial; this is such a wonderful milestone for our community. Congratulations to the leadership both current and past who preserved our legacy, grew our community and made Erie County a place that we are proud to call home.”

Flying Bison Brewing founder Tim Herzog said, “The beer folks at Flying Bison are honored to be asked to take part in EC200 celebrations. We think EC200 ‘Parks and Recreation’ pilsner will be a great beer to celebrate our past, present and future with."

Casimir Rodriguez Sr., chair of the Diversity and Inclusion Committee, added, “Erie County has been a beacon of hope to people from around the globe for 200 years. Our unique, diverse stories are woven into the tapestry of our community and our lives. This celebration honors the spirit and dedication of people committed to diversity and inclusion in a celebration that unites and bonds us all.”

Khalid J. Qazi, founding president of the Muslim Public Affairs Council of WNY, said, “Two-hundred years of progress and struggles in Erie County embodies ‘E Pluribus – Unum’ as inscribed on the great seal of the United States. By banding together, the journey continues for its residents of incredibly diverse backgrounds.”

On April 2, 1821, New York state officially recognized Erie County. After the American Revolution, the Holland Land Co. purchased 3.2 million acres of land from the Seneca Nation of the Haudenosaunee (Iroquois).

In 1808, New York organized the westernmost land as Niagara County. By 1821, the population had increased so much that Niagara County was split.

In 1901, President William McKinley was assassinated at the Pan-American Exposition in Buffalo and, on Sept. 14 of that year, Theodore Roosevelt was sworn in at the Wilcox Mansion as the nation’s 26th president.

Once heavily forested frontier, the region changed as the Erie Canal brought prosperity and made the Niagara Frontier one of the largest shipping and rail centers in the country.

Erie County is home to numerous inventors and inventions – the Ball canning jar, Barcalounger and air conditioning all originated in Buffalo. Wilson Greatbatch developed the implantable pacemaker in Clarence, and Bell Aircraft was one of the nation’s largest suppliers of aircraft during WWII.