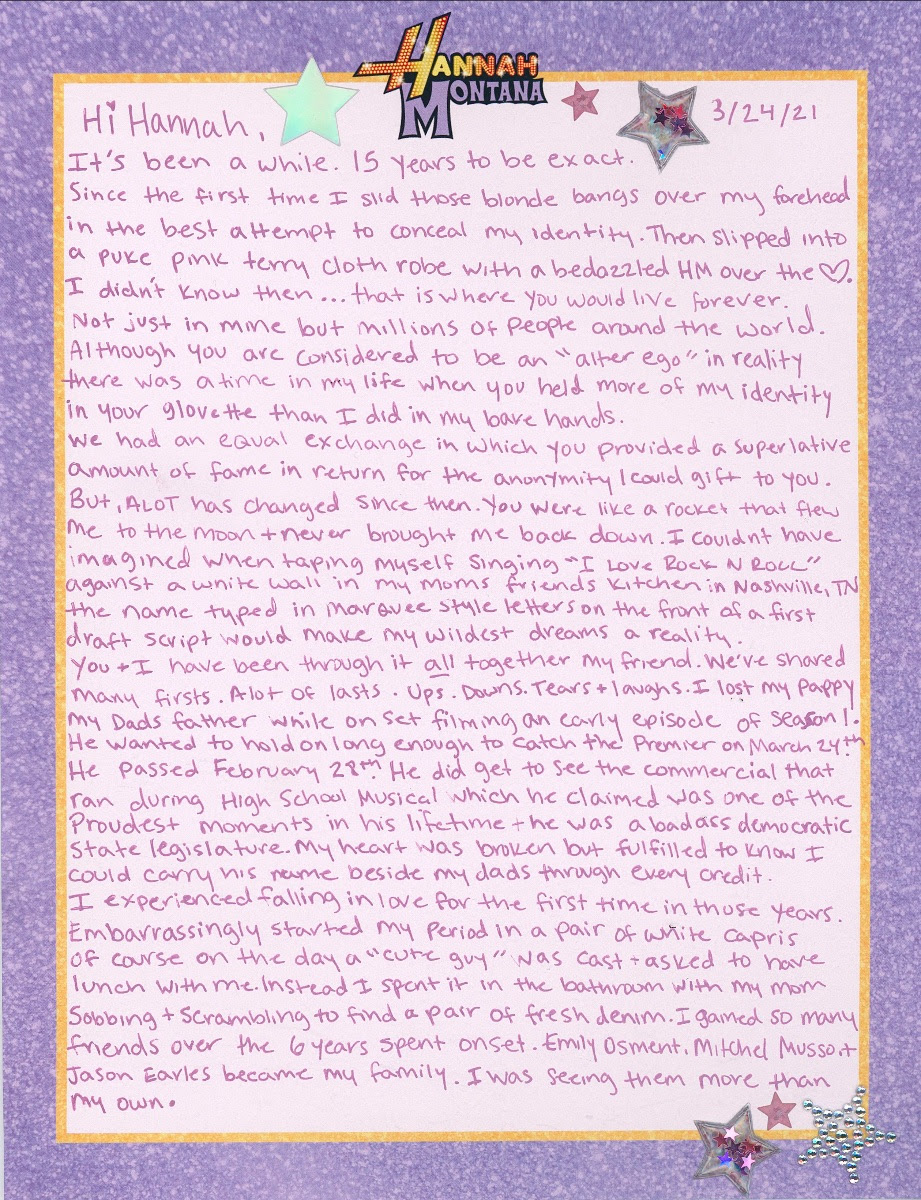 Miley’s letter to Hannah that was posted to her Instagram, @MileyCyrus, HERE; find a response from Hannah on her personal Instagram page, @HannahMontana, HERE.

It’s been a while. 15 years to be exact. Since the first time I slid those blonde bangs over my forehead in the best attempt to conceal my identity. Then slipped into a puke pink terrycloth robe with a bedazzled HM over the <3. I didn’t know then…that is where you would live forever. Not just in mine but millions of people around the world. Although you are considered to be an “alter ego,” in reality there was a time in my life when you held more of my identity in your glovette than I did in my bare hands.

We had an equal exchange in which you provided a superlative amount of fame in return for the anonymity I could gift to you. But, A LOT has changed since then. You were like a rocket that flew me to the moon + never brought me back down. I couldn’t have imagined when taping myself singing “I Love Rock N Roll” against a white wall in my mom’s friends kitchen in Nashville, TN, the name typed in marquee style letters on the front of a first draft script would make my wildest dreams a reality.

You + I have been through it all together my friend. We’ve shared many firsts. A lot of lasts. Ups. Downs. Tears + laughs. I lost my Pappy, my dad’s father, while on set filming an early episode of Season 1. He wanted to hold on long enough to catch the premiere on March 24th. He passed February 28th. He did get to see the commercial that ran during High School Musical which he claimed was one of the proudest moments in his lifetime + he was a badass democratic state legislature. My heart was broken but fulfilled to know I could carry his name beside my dad’s through every credit.

I experienced falling in love for the first time in those years. Embarrassingly started my period in a pair of white capris, of course on the day a “cute guy” was cast + asked to have lunch with me. Instead I spent it in the bathroom with my mom sobbing + scrambling to find a pair of fresh denim. I gained so many friends over the 6 years spend on set. Emily Osment, Mitchel Musso + Jason Earles became my family. I was seeing them more than my own.

Well besides my dad who I drove to work with every day until my mom let me buy a Prius, which then I was only 15 with a permit so my co-pilot was my grandmother “Mammie” who ran my fan club MileyWorld out of the dressing room kitchen I shared with my dad until our last day in 2011. One I will never forget.

It was bittersweet to know I would be leaving you (a HUGE piece of me) behind in Stage 9. Which is where I say I grew up when asked. It was my home. The finale episode was appropriately titled “Wherever I Go” after a final song by the teen pop sensation herself. You. Me? Hannah Montana. The first verse sings “Everything is about to change, A chapter ending but the stories only just begun. A page is turning for everyone.” And closes on a soaring chorus belting ”we might be apart but I hope you always know you’ll be with me wherever I go.”

Hannah, I hope you hear me + believe those words are true. You have all my love and upmost gratitude. Breathing life into you for those 6 years was an honor. I am indebted not only to you Hannah but to any and everyone who believed in me from the beginning. You all have my loyalty + deepest appreciation til the end. With all sincerity I say THANK YOU! To Disney’s entire team, all fellow cast members, special guests, crew, agents + managers, ESPECIALLY my mommy who took me to every lesson and audition even when it required leaving town or making a cross country move which with my siblings so selflessly underwent. Not a day goes by I forget where I came from. A building in Burbank, California with a room full of people with the power to fulfill my destiny. And that they did. They gave me you. The greatest gift a girl could ask for. I love you Hannah Montana.
Forever,
Miley 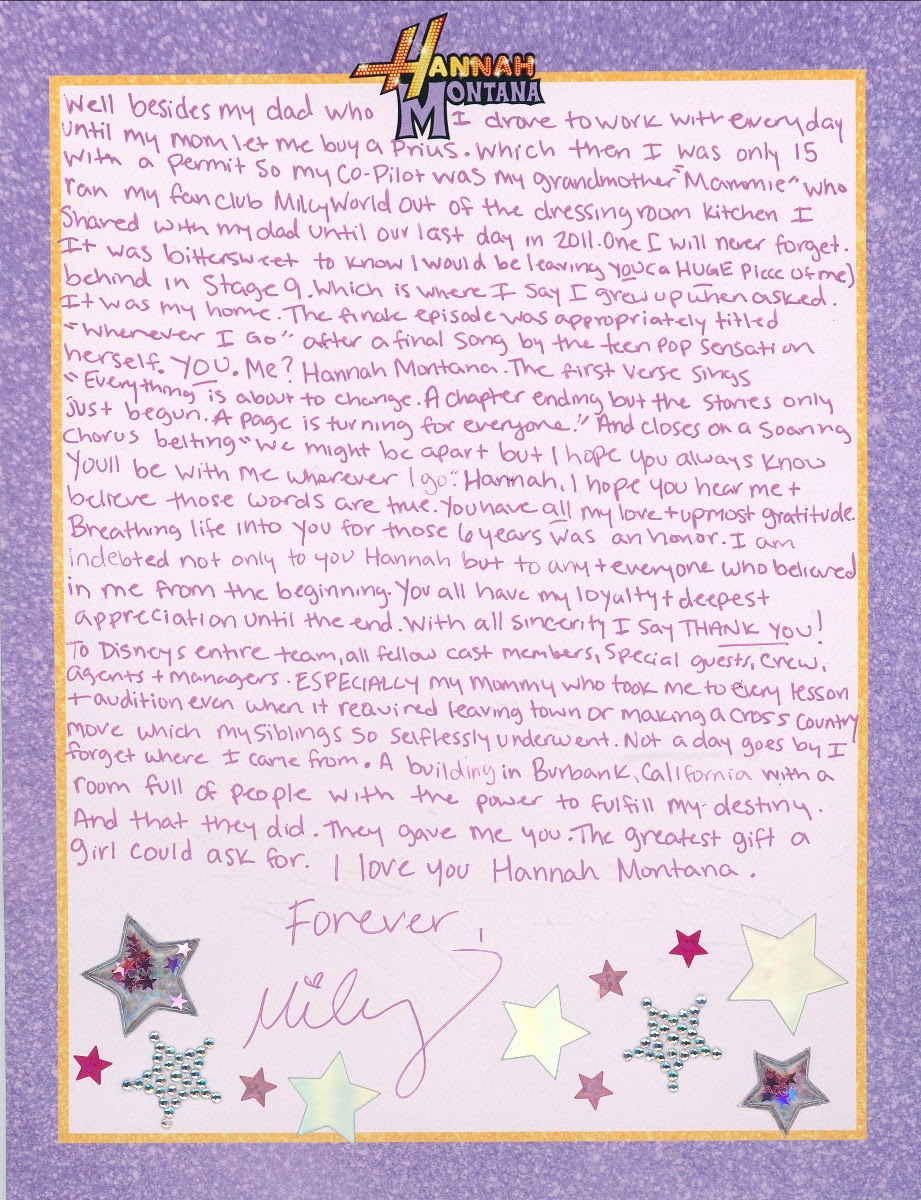